To get you into the Christmas spirit I have prepared a quiz, if you want to brush up on all of the Christmas vocabulary and history beforehand then have a look at these posts here, here, here and here. Let me know in the comments below how you do, viel Glück! 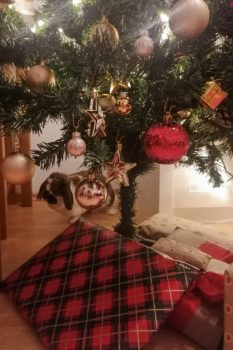 unter dem Weihnachtsbaum (under the Christmas tree), own photo.

Presents are opened on the 25th of December in Germany

False, Christmas in Germany is celebrated on the 24th of December which means presents are also opened on this day.

St. Nicholas comes on the 5th of December in Germany

True, St. Nicholas was known for giving presents and food to the poor and he is traditionally celebrated on the 5th of December each year.

St. Nicholas and Santa Claus are the same person

True, as the Church did not want a catholic saint to be remembered they banned St. Nicholas’ day, so the pilgrims changed the day and gave St. Nicholas a new look and name.

Glühwein can only be made from red wine

False, there are lots of different variations of Glühwein and they can also be made from white wine and rosé.

Other than wine, what are the other ingredients used to make Glühwein?

Name the traditional cake that is eaten around Christmas time

Who is the Christkind?

The Christkind was created by Martin Luther to eliminate St. Nicholas. He is a child like figure that resembles Jesus and brings children presents on the 24th of December.

Translate these words from German to English

Translate these words from English to German

How did you do? The total score is 23, let me know how you did in the comments below.