An Caisearbhán (The Dandelion), Cuid 2: Other Names for ‘Dandelion’ in Irish Posted by róislín on May 27, 2016 in Irish Language 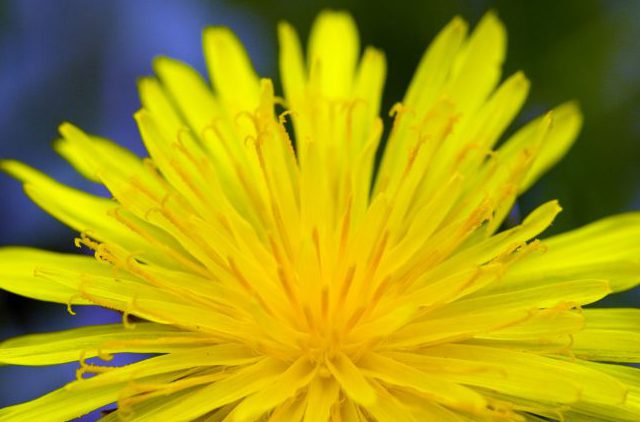 Last time we looked at the word most typically taught for “dandelion” (caisearbhán [kah-SHAR-uh-vawn]) and checked out its interesting etymology (cos, foot, or maybe gas, stem + searbh, bitter + -án).  Today we’ll look at the different ways this word can be used in sentences or phrases, and then we’ll move on to some other names for the same plant.

“Caisearbhán” follows the same pattern as words like “cupán” or “cábán,” and it’s masculine (grammatically):

And since we rarely see just one dandelion growing in our lawn:

na gcaisearbhán, of the dandelions

You might like to compare those forms with, for example, cupán: an cupán, cupáin, an chupáin, and pl: cupáin, na cupáin, cupán, na gcupán.  You might have heard the last in that series in the title of the song, “Amhrán na gCupán” (The Cup Song, lit. the song of the cups), for which I have provided a nasc, thíos.

Having said all of that, there are a few names for dandelions that are based on entirely different concepts:

a) bior na brighde, or in modern spelling, “bior na bríde.” As far as I can tell, this phrase could have two different origins, depending on which “bior” is intended. One set of meanings for “bior” can mean “skewer,” “lance,” “bar,” etc., and the other, a completely different word, means “water,” “well,” or “stream. ”  For the latter, I’d add that “bior” isn’t the most typical word for any of these; the more typical choices would be “uisce,” “tobar,” and ‘sruthán.”

The word “brighde” or “bríde” here looks like it comes from “brighid,” meaning “a maiden” or “a fair lady.”  The possessive form is “brighde” or, in modern spelling, “bríde.”  There’s probably a connection here to St. Bridget (Brighid or Bríd, but the exact nature isn’t clear.  A generalization from the saint’s name?  A saint’s name based on the general term?

In theory, “bior na bríde” could mean the “lance/skewer of the maiden.”  Hmm.  Sounds more like “Brynhildr” than “Bridget” to me!

“Bior,” referring to water, is used in the name of several plants but usually as a prefix and usually with plants clearly connected to water: bior-shlánlus (water plantain) and biorchopóg (water dockleaf), mar shampla.   If this is our origin, then the phrase should mean something like “the water of the maiden” or “the well of the maiden.”  Hmmmm.

I’ve seen a few spellings of this which capitalize the “b” of “brighde / bríde,” making it look as if the word had to do with “Naomh Bríd / Naomh Brighid (St. Bridget), but then why would we have the word “na” in the middle of the phrase (bior na bríde)?  Normally there would never be a “na” in that position in the sentence.

I also wonder if the “brighde” part could somehow be related to “brí,” meaning “a hill” or “a brae.”   That word used to have a “-gh” in the form “breagh” (of a hill, of a brae) and also in its old dative form, “brígh.”  In that case, we might have “the lance of the hill.”  That seems like a good plant name, but where would the “-de” come from?  Níl a fhios agam.  BTW, probably the most familiar use of “brí” today is in the place name “Brí Cualann” (Bray, in Co. Wicklow).

Bhuel, admittedly, that’s not very conclusive, and I don’t find any quick answers online.  But at least we’ve planted the idea as food for thought.  And now for three more, which fortunately aren’t as ambiguous:

d) bearnán brighde, “little gap of … whatever “brighde” means here. Curiously, this phrase can also be used for “juniper.” A luibheolaithe, we really need you here!

Bhuel, sin a lán ainmneacha ar an “dandelion.”  Oh, and I almost forgot, its ainm déthéarmach is “Taraxacum officinale.”  “Taraxacum” may either come from the Arabic “Tharakhchakon” or the Greek “Tarraxos.”  Slán go fóill – Róislín

1) Tá blas searbh ar dhuilleoga an chaisearbháin.  There is a bitter taste on the leaves of the dandelion.

2) Is féidir fíon a dhéanamh as caisearbháin.  It’s possible to make wine from dandelions.

3) Is féidir duilleoga an chaisearbháin a úsáid i sailéad.  It’s possible to use the leaves of the dandelion in a salad.