Bláth Buí Eile — An Caisearbhán (‘Dandelion’ in Irish) Posted by róislín on May 24, 2016 in Irish Language 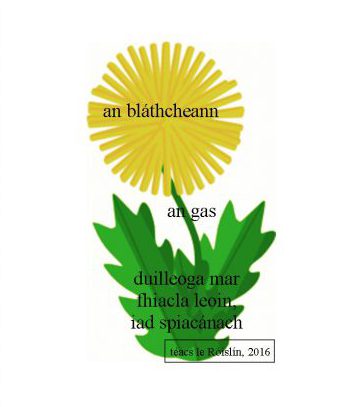 Continuing our break from the flower-themed girls’ names (like Bláithín, Lile, and Nóinín), we’ll look at another actual flower.  Why specifically a “bláth buí” at this particular time?  Well, we did nóiníní, which may be partly or all yellow, and then cama an ime, which are completely yellow (hence the “im” part of the name), so why not one more yellow flower?  Especially since this one seems to grow under almost any conditions, i Meiriceá Thuaidh agus san Eoráise.  In fact, an caisearbhán is often simply considered a widespread nuisance, more of a fiaile than a bláth, although we could consider it a “fiaile bhláthach” (a flowering weed).   And after all, they’re gleoite go leor, in their own over-populous way, agus inite, leis.

So let’s take a look at the Irish for “dandelion.”  There are actually at least five different terms for “dandelion,” several of which have several variations — an gnáthscéal!

This blogpost will probably just deal with the term that’s most widely used (fad m’eolais).  Which means, right off that bat, that we’ll have to save any further discussion of “fiacail leoin” for another blogpost.  Except (;-) to note that that phrase is the closest Irish equivalent to the French original of “dandelion,” which is “dent de lion.”  So no dandies, gaigí, gaigíní, gaigí na maige, or scóitséirí involved here, fun as it is to think of “dandelions” as “dandy lions” as in the historic Grandville print, ca. 1840 (thíos) or Bill Peet’s more recent children’s book, Randy’s Dandy Lions (1964).  Which, I guess, could raise the question, are Peet’s lions dandies ( à la Grandville) or are the lions simply “dandy lions” (i.e. fantastic).  Bhuel sin ceist don Bhéarla!  Ní bhaineann an t-imeartas focal sin leis an nGaeilge!

As for the basic term, it’s “caisearbhán” [kah-SHAR-uh-vawn].  When I first learned this word, I picked out the “searbh” [bitter] part quite readily, but never really thought about why the plant is considered bitter to the taste and why we had “cai-” as a prefix.  “Cai-” isn’t a standard prefix like “in-” or “mí-” or “droch-,” so I always vaguely wondered what it was doing there.  Poking around online for writing this blogpost tells me that it’s the leaves that have the bitter taste and the “cai-” is probably really “cais” (or “cois” or “cos,” meaning foot), so the idea is something like “bitter-footed one.”  Nice to know!  One of these days I’ll finally get around to eating a dandelion leaf salad, and then I guess I’ll have first-hand evidence about the “blas.”

And btw2, although usually all yellow, there is at least one type of white dandelion, found in Japan (Taraxacum albidum).

There’s so much more on dandelions, that I think we’ll have at least one more blogpost on them.  I’m actually champing (chomping, do rogha féin) at the bit to see if there’s an Irish language version of the folk nickname for this plant, variously known as “pissabeds,” “pissenlit,” “pisacan,” and “blodyn pi-pi gwely.” So far I haven’t found any vernacular term which involves “múnadh” (not to be mistaken for “múineadh,” please!).  Eolas ag duine ar bith ar leasainm mar sin?

Hoping you find this topic as suimiúil as I do, SGF  – Róislín 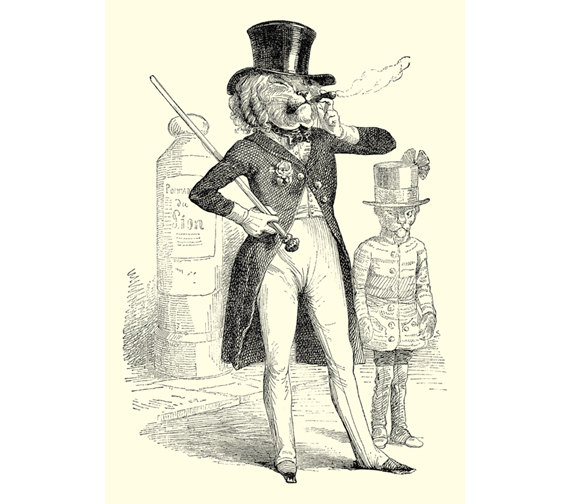