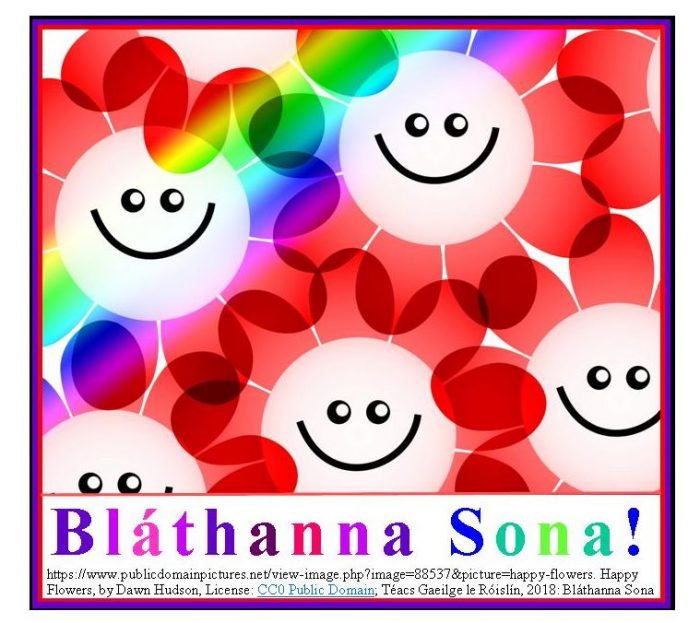 We’ve recently had a request for the phrase “Be happy!” for a tattoo. So seo dhuit, na frásaí is coitianta (mo thuairimse, ar a laghad) le “Be happy” a rá agus ansin súil siar ar dhóigheanna eile le “happy” a rá i nGaeilge.  So, here you are, the most common phrases (my opinion, at least) for “Be happy,” and then a review of other ways to say “happy” in Irish.  As you may remember from a previous blogpost (nasc thíos), I’ve counted at least 20 versions of “happy” so far for Irish.

First, to answer the specific question: How to say “Be happy!”  This is short of translating the entire “Don’t Worry, Be Happy” song by Bobby McFerrin (which I’m now actually inspired to do). Here are the two basic ideas:

1a. Bí sona! — this is quite literal, meaning “Be happy!”  But this is singular, so if you want to make the “command” (as it were) plural, it would be:

1b. Bígí sona! — this is like saying “You all be happy!”  Remember, English is one of the few (maybe the only) European language that doesn’t distinguish between “you – singular” and “you – plural.”  Remember your Sie/du, chi/ti, vous/tu, vos/usted/vosotros/ustedes/tú, and many other parallels?

Of course, English used to have this distinction, using “thee,” “thou,” and “thy/thine” for the singular, and “ye,” “you,” and “your” for the plural.  By now, the original 2nd-person singular forms (i.e. thee, thou, thy, thine) are almost entirely limited to songs, poetry, and quotes from, say, Shakespeare.  In the US, there’s the patriotic song “My Country ‘Tis of Thee” and more generally we have “Drink to Me Only with Thine Eyes” and “Fare thee well,” which shows up, a bit surprisingly, in the song “Polly Wolly Doodle.”  There are also Shakespearean lines like “Get thee to a nunnery” and “How do I love thee?  (Let me count the ways).   Interestingly, the “thee/thou/thy/thine” set, normally the “familiar” form, is also used to show respect when speaking of God in some English hymns and in the King James Bible and translations in a similar register (“How Great Thou Art,” “Love thy neighbor as thyself,” etc. ).

Irish is sort of like most of these other European languages in that it does have a singular and plural form for the pronoun (tú/sibh), for the possessive adjective (do/bhur), and for various verb forms (bí/bígí, déan/déanaigí, goitse/goitsigí, srl.).  However, in most modern Irish usage, the idea of using a plural form to just one person to show extra respect doesn’t apply.  I have been told that it does apply/has applied if speaking to one priest, but I can’t say I’ve ever actually heard that usage in a real-life context.  The person who told me about that usage (RIP, a Ethel) was probably recollecting Irish as spoken in, say, the 1950s.

The second main choice uses a very Irish structure, literally translating to “Let there be happiness on you.”  That may sound a bit convoluted in English but the structure is very typical in Irish.  Once again, we have a singular and a plural form:

2a. Bíodh áthas ort! (Let there be happiness on you!)

2b. Bíodh áthas oraibh! (Let there be happiness on you all!)

As you probably noticed, we’ve done a linguistic leap in vocabulary, using a word (áthas, happiness) not related to “sona” (happy).  “Sona” actually does have its own “noun” form, “sonas.”  So, in theory, we could also say

2c. Bíodh sonas ort! (Let there be happiness on you!)

2d. Bíodh sonas oraibh! (Let there be happiness on you all!)

But, for this structure, using “áthas” seems more familiar.  In fact, “Bíodh sonas ort!” starts to get close to a phrase that’s sometimes used for “Thank you!” in Irish (“Sonas ort!,” which implies an invisible understood verb “bíodh“).  For any total newcomer to Irish here, though, please be advised that the most typical way to say “Thank you!” in Irish is completely different.  It’s “Go raibh maith agat” (to one person) or “Go raibh maith agaibh” (to more than one person).

Those are your basic choices for “Be happy!”  But as I mentioned previously, there are many other choices, depending on how wide you want to cast your vocabulary net.  We don’t have space here to elaborate on the many other ways to say “happy,” but here’s a list of possibilities and you might like to check out the previous blogpost on the topic (nasc thíos, mar a dúradh thuas):

Hopefully this has answered the original question (the tattoo request), and stimulated food for further thought regarding vocabulary and human (i.e. non-machine) translations.  So I’m tempted to close with, “How shall I define thee?  Let me count the ways!”  Slán go fóill — Róislín

PS: I wonder if Bobby McFerrin would like to sing his song in Irish — I’m ready to oblige with a translation!

Nasc: Twenty Ways to Say ‘Happy’ in Irish and Which Ones to Use for ‘Christmas’ and ‘New Year’Posted by róislín on Dec 25, 2017 in Irish Language