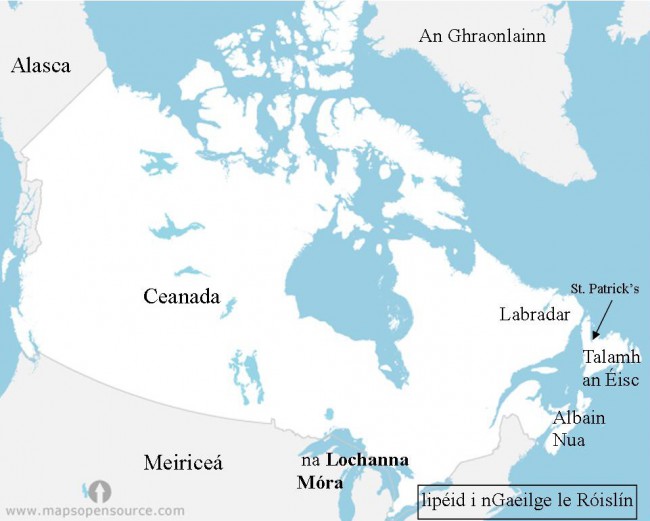 Well, to answer the title question, the St. Patrick connection will primarily be in the first of the four words in the title, “naoimh.”

You might remember that in the most recent blog (nasc thíos), we looked at these five words: naomh, neamh, neamh- (the prefix), Niamh, and nimh, meaning, in order: saint, heaven, in-/un-/non-, Niamh (the girl’s name), and poison.

So today we’ll start looking at another form of these words, known in Irish as “an tuiseal ginideach” (the genitive case).  But we won’t need to look at “neamh-” the prefix, since prefixes don’t have inflections like an tuiseal ginideach — and that’s at least one less thing to worry about.

Let’s start with “naomh” and the form “naoimh,” for this 2-part blog post.

While “naoimh” does mean “of a saint,” we should note that when we’re referring to a specific saint, using “Naomh” as a title, the word “Naomh” typically doesn’t change at all, even when we’re talking about something “of” or “possessed by” that saint.  A classic example is:

I’ve always wondered why it isn’t “San Pól,” but that’s a discussion for another blog.

Getting back to St. Patrick, it’s also interesting to note that, in his case, the title “Naomh” itself is noticeably absent in many phrases that refer to something “of” St. Patrick.  Examples include:

Lá Fhéile Pádraig, the day of the feast of Patrick, i.e. St. Patrick’s Day (the word “saint” isn’t in the phrase in Irish)

pota Phádraig, the pot of Patrick, referring to the St. Patrick’s Day drink

and various place names, such as

As you can see from the anglicizations, these place names don’t have “St.” in the English versions either.  As far as I can tell, there’s no town or village in Ireland that’s actually called “St. Patrick,” the way there is in Newfoundland (St. Patrick’s) and in Missouri (St. Patrick).  In case you haven’t heard of these latter two places, it’s not too surprising considering their population size.  According to Adam Farley’s article, “Irish in the Heartland: St. Patrick, Missouri,” the population of St. Patrick, MO, was about 20 in 2013 (nasc thíos).  For St. Patrick’s, Newfoundland, which is in Green Bay, itself part of Notre Dame Bay, I can’t actually find a population figure online.  The closest I can find are the nearby communities of Little Bay, at 166 (ca. 2015), Little Bay Islands, at 97 (2011), and the nearest large town, Springdale, at 2,764 in 2006 (naisc thíos).  So I assume that St. Patrick’s, Newfoundland, has a population along the lines of Little Bay and Little Bay Islands.  Eolas cruinn ag duine ar bith?

It would probably be of interest for someone to look at why one community is simply called “St. Patrick” and the other is called “St. Patrick’s.”  And I suppose that could have some interesting ramifications for discussing why we have St. David, Arizona, and St. David, Illinois, but St. David’s, Wales (Tyddewi, lit. House of David, in Welsh), and St. Davids [sic], in Pennsylvania.  Presumably the latter was originally “St. David’s,” but apostrophes have been falling like flies lately.  In fact, St. David’s, Wales, sometimes shows up without its apostrophe (as “St. Davids”), also, but the traditional version still seems to be holding its own.

And to think that all of this discussion came from looking at an tuiseal ginideach, when we use it and when we don’t!  Which could be a book-length discussion, but we’ll cut it short here.  Remember, up next: neimhe, Néimhe, and nimhe, a few more examples of an tuiseal ginideach, before we move on to other topics.  Slán go fóill  – Róislín

PS: There is at least one Patrick-related place name in Irish that does get anglicized with the “St.” element though:   St. Patrick’s Purgatory: Purgadóir Phádraig (Dún na nGall).  However, still no “Naomh” in the Irish.  Perhaps it’s because of the greater religious significance of the area?

https://blogs.transparent.com/irish/irish-language-blog/, Naomh, Neamh, Neamh-, Niamh, Nimh — Which One Pertains to St. Patrick and How Do You Pronounce Them? Posted on 17. Mar, 2016 by róislín in Irish Language

https://en.wikipedia.org/wiki/Springdale,_Newfoundland_and_Labrador.  This page was last modified on 12 February 2016, at 16:58