Avid language learner Alex Rawlings believes everyone can master a language, or many languages, like he has. That’s why he’s sharing his advice and answering your questions each month in the Just Ask Alex series. Missed a previous entry? See them all here. Have a question for Alex? Leave a comment or tweet @TLILanguages using #JustAskAlex.

Does it matter if I get the gender of nouns wrong? How can I learn them once and for all?

The idea that nouns can have a gender is a bit baffling for native English speakers at first. Even more confusingly, these genders can drastically vary across different languages. Why is a French table a ‘she’ but a German one a ‘he’?

Well, the truth is that nobody really knows. Gender can make a subtle difference to the meaning of words, as I mentioned in an article on my blog a few months ago, but nothing significant enough to have to worry about yet. Basically, you just have to learn that that’s the way it is.

The good news is that if you mess up and say something’s masculine instead of feminine or vice versa, it doesn’t really matter. 9 times out of 10 you will be perfectly understood based on the context of what you’re saying, and people will just accept that you’re a foreigner and you can’t be expected to know everything. If speaking accurately is not your priority (there’s no reason why it has to be…) then not knowing genders shouldn’t present you with any serious miscommunications.

But if you want to sound like a native speaker, then tightening these grammar bolts is an important step towards that. And actually, learning everything correctly might not be as daunting as it first seems.

When I study German vocabulary, I always learn it with the article: der Tisch, die Bushaltestelle, das Kino and so on. When I need to remember a word, I find I remember the article as well, as though it were a part of the word in the first place. If you’re a visual learner like me, you can also try writing out vocab lists in different coloured pens, and grouping it all by gender. You could also learn little stories to help you along, for example: ‘Der Mann sitzt am Tisch’ (the man is sitting at the table), ‘Die Frau geht zur Bushaltestelle’ (the woman is going to the bus stop) and so on. That way you will remember that Tisch (table) can only be masculine because the man is sitting there. Have a go at using various tactics to try and bring this grammar stuff alive, and work out which works best for you.

But there are other ways to “cheat”, as well. Russian, for example, has a really transparent system of gender for nouns, which you can work out by the last letter of the word. If it ends in ‘a’ or ‘i’ then it’s nearly always feminine, if it’s a consonant then it’s always masculine, and ‘o’ or ‘e’ means it’s neuter. Equally in German, ‘-ung’ and ‘-schaft’ are endings always seen on feminine nouns. There are rules like this in every language, and any reputable grammar book will tell you what these are.

How can you understand the difference between tenses?

When you’re quite new to learning languages, tenses can be quite intimidating. They come with impossibly long names, they might be tricky to learn, and you don’t understand why you keep getting them wrong.

As you learn more languages, the technical names for grammar aspects like tenses become more familiar, and understanding how languages work becomes easier to get your head around.

The past tense in most European languages is generally divided into two parts: the perfect and the imperfect, used for completed and uncompleted actions. The imperfect is used to set the scene, the atmosphere, the tone and generally background information for a story, while the perfect is used for actions that take place within that context. What is expressed in the imperfective is a constant that does not change, while the actions in the perfective are current, changing, but do not necessarily affect the overall context. Here’s a diagram: 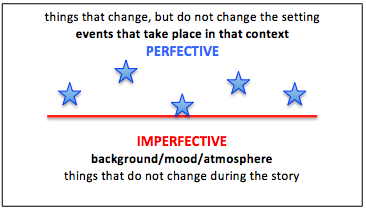 As the question sent in was originally about Spanish, I’ll use that as an example:

This description is used to set the scene for what is about to happen. Because it doesn’t change, all of the verbs are in the imperfective. Everything described – that it was cold, that Mary was walking through the street, that it was raining, and that she couldn’t see the faces of the other people standing in front of the supermarket – is still going on when actions start taking place in the perfective:

The perfective verbs in blue, which in Spanish is called the preterite, are all things that happened in the context of the background – she saw a man, he saw her too, he smiled, he said hello. But it’s still raining, she’s still walking through the street, and she still can’t see who’s standing in front of the supermarket. “Conocía” is in red because it provides more background information, and therefore must be in the imperfective. She knew him from her childhood, and that is something that does not change in this scene, but that provides a context for the perfective actions (in blue) that follow.

Reading simple stories, perhaps even children’s stories, and paying close attention to the way that tenses are used is a good way to get used to them. It will also help you to develop more of an instinctive sense of when to use them.