My Late-Life Language Learning, Part 4: I Learn to Speak – But Not ’Til I Forced Myself To Do It! Posted by Transparent Language on Oct 9, 2013 in Archived Posts

In Part 3, we got down to the brass tacks of learning a language, and I discussed how I began by taking introductory courses. For self-learners, there are perfectly good online resources out there that can teach you what I learned in my classes.

What I still had enormous trouble doing at that stage, though, was speaking and understanding spoken French.  My wife and I were spending time in Paris by then, and with our small vocabulary of words and short phrases we could get by in stores, newspaper kiosks, cafés, and the Métro.  But we were by no means “speaking French.”, though it is surprising how far one can get with the words for “where is…,” “how much is…,” “do you have…,” and so on.

Especially valuable is a wonderful opening:  “Excusez-moi, monsieur (or madame) pour vous déranger…”  This phrase, “Excuse me, sir (or madam), for bothering you…” is, in my experience, an absolutely magical formula that calls forth from anyone you might meet on the street immediate and amazingly patient help with whatever your current problem might be.  One Parisian whom I accosted in this way actually dropped what she was doing and led me several blocks away to the bus stop I was looking for!  So much, by the way, for the supposedly nasty Parisians, who hate all Americans…and I have a bunch more stories to support that, too! 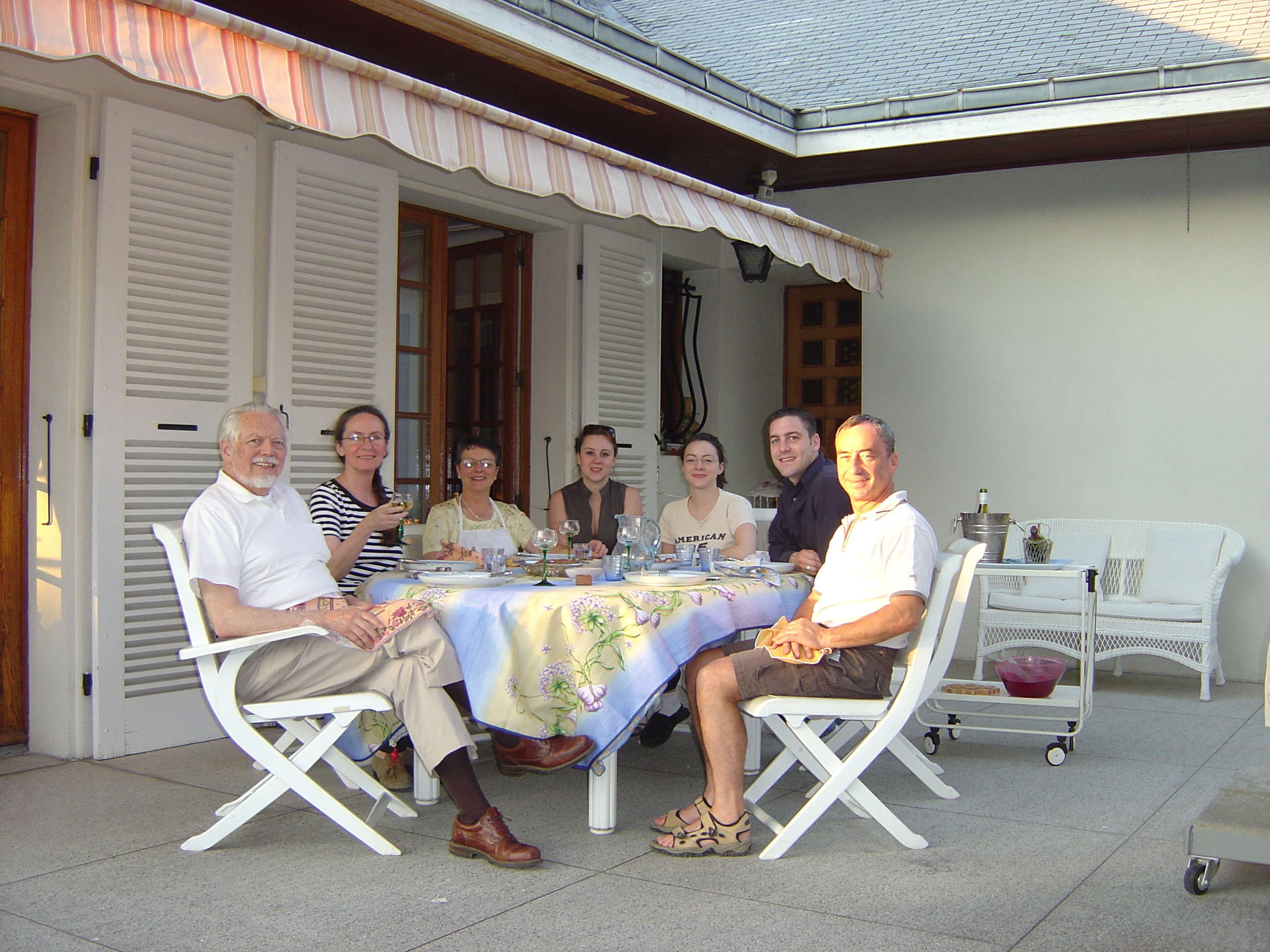 Enjoying a casual dinner with some non-English-speaking friends.

But back to language learning. At this stage, understanding spoken French, delivered at “normal” native-speaker speed, was impossible! We can’t really fault the French for delivering a sentence as if it were one long word, because we do it, too.  Consider “Lesgodalunch.”  Did you get that?  “Let’s go to lunch.”  Americans, I’m sure, picked it up immediately, but I’ll bet a non-native English speaker would have a tough time with it.

So how did I learn to comprehend spoken French well enough to get along in the situations I faced every day in Paris? My answer is going to disappoint you, because for listening and speaking, there’s just no pill you can take, nor a magic bullet; you just have to listen and listen, and speak and speak!

But there is some good news, too.  Because of the variety of spoken French resources that are available out there, this part of the learning effort can provide some of the most fun you will have in the learning process – as it continues to do for me.

My favorite “sources of spoken French” were, and are, my wonderful tutors!  I have had several, the best and longest-standing among whom is “Cécille,” who – lucky me! – is also a good friend and near neighbor.  She is a native-born Francophone and an experienced teacher. Cécille gave me a good start on oral comprehension, and she’s still someone with whom I can speak French “live” – a valuable and rare continuous-learning resource.

My Paris tutors have been three, so far.

First, ‘way back in 2005, came “Pico,” whom I found through a friend who had contacts among the students at the Sorbonne, many of whom are eager to add to their often slender purses.  25 or so years old, Pico was now a TV writer who also happened at the time to be a bit underemployed, and was thus glad to pick up the smallish hourly fee that I paid him to work with us.  I agreed on two, two-hour sessions per week in our apartment during this, our first six-week stay in Paris.

What did I do in my sessions with Pico?  At first, during most of our sessions during that first long stay in Paris I just sat in the apartment and conversed – or tried to – with Pico speaking, and then explaining, the less-than-textbook-formal French that is spoken in Parisian daily life.  Later I made some forays into the real world with Pico as nursemaid – to cafés, the newspaper kiosk, and so on – so that I could try my tentative conversational skills “in combat.”

Those sessions with Pico initiated the mandatory training of the ears that eventually enables one to recognize the messages that, for early learners, are obscured in those rapid-fire street-French sentences.  Again – you have to listen, and listen some more!  Nothing else works. 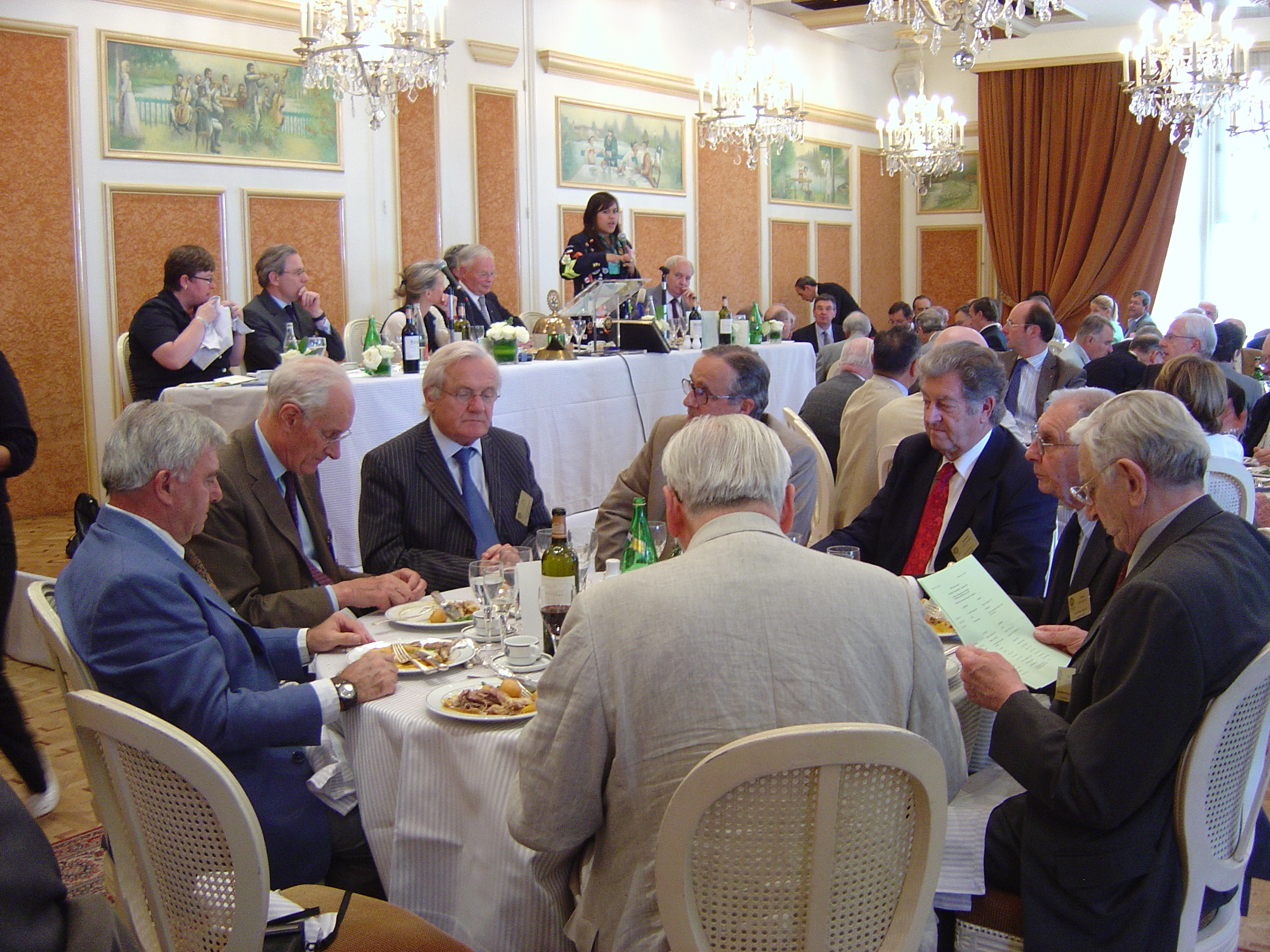 Surviving a formal luncheon with a room full of high-horsepower Parisian business and political leaders.

The following year in Paris I called Pico but found that now he was no longer underemployed (good!), but was thus not available to help us (less good).  He did, however, do us the wonderful favor of finding a second tutor, the beautiful and delightful “Emma,” to take his place.

Work with Emma was different; she was far more demanding.  She would arrive with a prepared lesson – often a dicté, in which she would read a French poem or short story, and I was expected to write what I heard in properly spelled French.  This was an exercise not only for my ears, but also for my vocabulary, including accented spelling.  It was hard at first, and my papers collected many red-ink corrections.  But it was working!  With Emma’s dictés and conversation practice, the flow of red ink began to abate, and I slowly developed more confidence in using the language as we lived our daily lives, eating, shopping, and exploring in Paris.

Our most recent tutor was “Arnie,” a Sorbonne teacher and PhD candidate in medieval poetry.  He was a brilliant tutor, but merciless!  He checked with me first, but upon being given the go-ahead to treat me as he did his Sorbonne students, he pressed very hard – I was reading, writing, speaking, listening to difficult material, and in the process swallowing heavy doses of fascinating French culture.  I had tons of homework, too, and the red ink again flowed like Niagara.  But what an experience!  Arnie was an intellectual and a serious academic, yes, but he was also a warm, personable, charming, and multi-faceted young man.

It took maybe a year, and there was no single moment when I could say, “OK, now I understand spoken French.”  It was a gradual thing that didn’t start happening until my succession of tutors demanded that I listen, and speak, and listen, and speak, until I wanted to run and hide!  But, perversely, it is listening and speaking, incompetently at first, but better and better, that teaches you – or taught me – to listen and speak.

Well, so much for the just-grit-your-teeth-and-do-it nature of the speak/listen part of language learning.  And maybe being old and stubborn, like me, actually helps!  Anyway,  for next time, I will tell you about how I always had in the background, whatever else I might be doing to improve my French, reading, reading, and more reading, in French!  Hugo, Flaubert, Sempé-Goscinny, Verne, Mayle (en français), Simenon, La Figaro, Le Monde…

So be prepared for a switch in emphasis.  Pressing forward with reading in a new language offers something to every learner, late-life and otherwise.

À la prochaine!  (Until next time!)