The 6 Stages of Language Comprehension Posted by Transparent Language on Jan 22, 2014 in Archived Posts 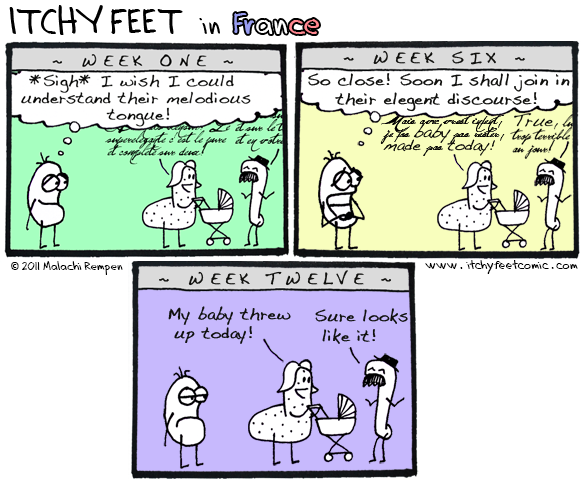 I wrote this comic back in 2011, right around when I began to understand a foreign tongue for the very first time. I had taken Spanish classes all through middle and high school, but the only useful information I remember from those years is how not to ask a girl out. Spanish didn’t stick, and there’s nothing like full-on immersion in an Anglophobic country like France to speed up the process of comprehension. I was amazed: one day I literally woke up and could piece together the conversations of people passing by on the street! And man – they were so boring!

After having gone through the same immersive process now with Italian and German (you may also find this recent comic relevant), I’m starting to notice patterns when it comes to understanding a spoken language. There are certain stages, like checkpoints in a race, that you cannot skip, you cannot miss, and once crossed, you cannot uncross. Here are the ones I’ve come to identify so far (although they do not always appear in this order):

You’ve just started living in a new country and studying a new language. You’re past the tourist bits like “hello” and “where are the bathrooms” (which I don’t include as a stage of language learning because you can definitely completely forget those), and you’re starting to notice something funny when you hear natives converse. You don’t understand necessarily what’s being said, but you can identify where each word stops and starts within the sentence. If you’re lucky, the sentence is built almost completely out of words that you understand – hooray! A rare victory. I call these Jenga Sentences because if you don’t know just one critical word within the sentence, the whole damn thing is lost on you, even if you understand almost everything else. Extremely frustrating!

Now you can keep up. If you concentrate hard and pay close attention to what’s being said, you will pick out the keystones of the sentence, and use them to build up the gist of what’s being communicated. This is an exciting time, because you feel like every conversation is laying another fat brick on the foundation of your language learning. And it is! The trouble is, this takes a lot of effort, and if you relax and let the words just wash over you, you’ll lose your place, and you’ll have to start all over to figure out the context. Conversations move quickly! After a dinner party or evening out with friends, you return home mentally exhausted. Your brain hurts! It’s been running on high gear all evening!

This is kind of a spooky one. You’ve had hundreds of successful conversations. You can go to the supermarket or bar without risking humiliation. One day you’re in a shop or out in the park and you overhear a number of strangers speaking to one another. Why is it that now, after weeks or even months, why now is everyone speaking slowly and clearly? Why couldn’t they have done that at the beginning, when you were just starting out? Before, you had to really concentrate to understand because everyone spoke at breakneck speed and mashed their words together like they were chewing on them. Now they’re all using simple language, at an easy pace, and talking about ordinary topics. Or … could it be that it’s not them speaking like dummies, but you’re actually getting better?

I’d heard before that you truly understand a culture when you can understand their humor. I don’t know if I completely agree with that, but when you can hear the setup and punchline of a joke in a foreign language and laugh along with the locals, you know you’ve taken another step in language comprehension. This one’s a bit dodgy since there are plenty of just unfunny jokes out there (looking at you, Germany), but when it’s a home run, you’ll feel that first spark of camaraderie with your adopted culture.

My mother, an American who speaks fluent German, told me about this one when I was a child frustrated by my Spanish homework, and it wasn’t until I experienced it for myself fairly recently that I believed her. If you’re like me, you watch TV shows, movies, or the radio in your chosen language-of-learning, just to keep your brain active. Well, at some point you’ll look up from whatever you’re doing and realize that you understood the radio ad or sitcom conversation so easily, you couldn’t say which language it was in. Wait, was that English? No, because now they’re speaking in French again. How strange…

Actually I don’t have a #6, because I don’t think I’m truly fluent in any of the languages I’m learning, so I don’t know what comes next! I’m sure some of you readers are fluent, so this is your cue to chime in with what you think the sixth stage of language comprehension is. Understanding dialects? Or poetry, or songs? Or being able to turn your brain off during a conversation and then pop back in at any time? You tell me, so I can have it in my mind to look forward to.

I’d heard this one dozens of times before I even started learning languages. Various people told me, “when you dream in another language, that’s when you know you’re fluent.” I say – balderdash! I don’t know about you, but there’s no one narrating my dreams. There are no subtitles or texts to read along with. My dreams are images, feelings, and the occasional conversation. When I converse in my dreams, I think I’m actually talking to that person, so why would I talk to my mom in French, or my long-lost childhood friend in German? If I speak German in my dreams, it’s probably a supermarket anxiety dream, and I speak at the same level of German I do in real life! If you can speak a language fluently in a dream, then you can speak it fluently in real life, and you don’t need the dream to tell you that.

Are there any stages I missed? Any substitutions? Share your thoughts!