Hello! My name is Malachi Rempen. I run a comic called Itchy Feet: A Travel and Language Comic, and I’ve posted a couple times before here on the Transparent Language Blog. Starting now I’m going to be contributing regularly, so I thought I’d begin with one of my older comics (above), the only one I ever did about the creative process. Which, as it turns out, is an important part of my language learning. 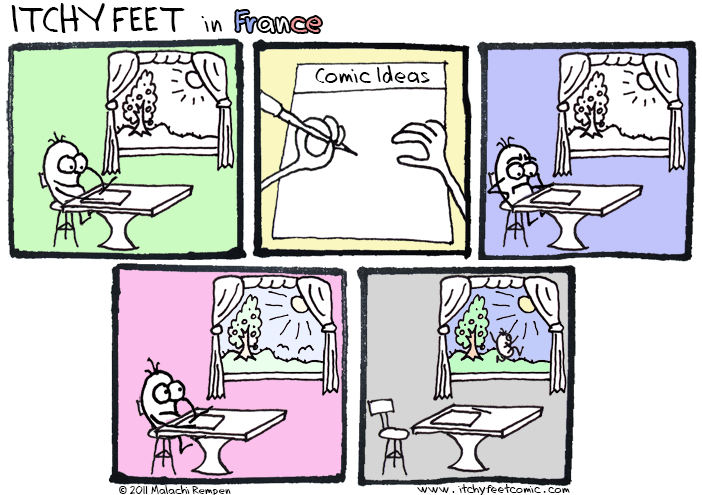 A lot of people come to me with ideas. “Hey Malachi,” they’ll say, “the craziest thing happened to me on my trip to Sweden. My credit card got stuck in the ticket machine, and I missed my train! Ha ha! You should make an ‘Itchy Feet’ about that.” Or, “you know what I hate about the Swiss? They’re such bankers! So organized, it drives me nuts. Make an ‘Itchy Feet’ about that.” Or, “isn’t it weird how English is easy to learn at the beginning, because there are so few verb conjugations and no gendered nouns, but then it gets much harder when you’re dealing with all the idioms and grammatical exceptions?” (Come to think of it, that’s a great idea for an “Itchy Feet” comic.)

See, it’s all about “funny weird” vs. “funny ha ha.” Ironically, a good joke or travel story (funny ha ha) doesn’t make for good comics. Who wants to read a comic about a guy missing the train? What’s the punchline? I usually take an observation like hey, isn’t it funny (weird) how when you drink more alcohol, you get better at speaking a foreign language? And then I turn that into a comic. It forces me to be very observant about everything I’m experiencing relating to travel, life as an expat, or learning a new language.

That last one in particular is key, because learning new languages has checkpoints. It’s easy to track your progress, and there are always more goals to work towards. Succeeded in ordering your first meal in a foreign language without slipping up? Now try ordering for everyone at the table. Successfully fooled a stranger into thinking you’re a local? Try fooling the parents of a friend. Talked your way out of a parking ticket? Now represent yourself in court. See? Checkpoints, which I then exaggerate for humorous purposes.

All this to say that “Itchy Feet” and my language learning go hand in hand for me. One keeps tabs on the other – needing to have a new comic each week forces me to examine my progress as a language learner (or traveler or expat), and learning new languages gives me new ideas for comics. There are hundreds of comedians, musicians, even painters (and writers, obviously – or you wouldn’t be here, would you?) who chronicle their struggles in learning new languages and foreign living with some sort of creative medium.

Mine happens to be comics, and I will accompany each of my following posts with another brightly-colored, expressive comic to start us going off on some idea, and we will explore it from several angles, and a good time will be had by all.

How do you creatively chronicle your progress? A multi-million-dollar world tour? YouTube instructional videos? A diary?