The Secret to Learning French: Avoid the French Posted by Malachi Rempen on Mar 19, 2014 in Language Learning

When I first moved to Morocco back in 2012, I had just spent a year living and working in Lyon, France. Granted, I hadn’t taken any French lessons before arriving (aside from a bit of listen-and-repeat audio training), and in fact French was never originally on my list of languages to learn, nor France on my list of countries to try living in, but still I found learning French to be more of an uphill battle than I was expecting, and it wasn’t until the move to Morocco that I realized why that was. 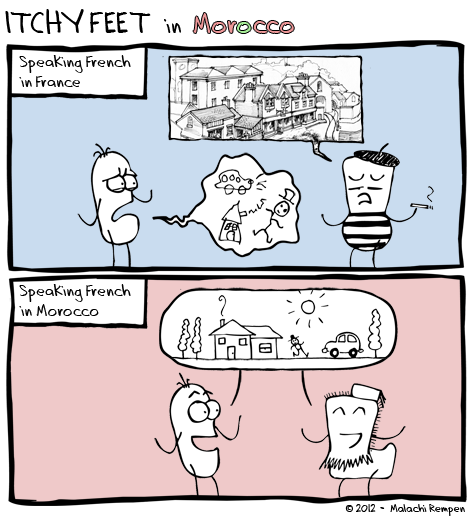 My fiancee is Italian. My Italian is decently conversational, but there’s something so very rewarding about trying out a language and seeing the locals light up with delight at your attempts. It doesn’t matter how badly I botch the word “cappuccino”, or whether I ignore the various articles and genders, or that I can’t seem to pin down the sing-song inflection. I’ve always found Italians in general to be tickled pink that I would even try.

Not so in France.

The French are not tickled pink, red, or any shade of the rainbow that you have decided to take it upon yourself to navigate their tongue-twisting tongue. Not only do they tend to be standoffish towards foreigners (this being a direct quote from a French fellow I met in my first week, who informed me of this fact before abandoning me at the bar), but they would rather soil their mouths with the sickly rounded Rs and twanging As of English than endure listening you hacking their precious language into viande hachée any further.

Now, believe it or not, I sympathize completely.

For centuries, French was the international language of business, diplomacy, and culture, a fact about which the French are understandably proud. Czar Nicholas II of Russia wrote his czarina in French. Frederick the Great of Prussia (German-speaking) declared French “universal.” Even Marco Polo, the Italian explorer, wrote the original chronicles of his adventures in French. Since then, however, French has taken something of a beating. The Treaty of Versailles was written in both French and English, more and more Francophone countries teach English to their businessfolk, and American English computer-related terminology attacks French on all fronts, despite the French nobly clinging to l’ordinateur and numerique (English, of course, has stolen and absorbed hundreds of French words and terms, from répondez s’il vous plaît [RSVP] to déjà vu to à la mode, and nobody makes a fuss…bon, c’est la vie). Nobody likes to be relegated to the #2 spot, least of all the French, and especially not to a language so lumbering and inelegant as English. They want to preserve a beautiful thing. I feel their pain.

But it doesn’t make it any easier to learn the language.

So even after a year in Lyon, my French was pretty poor. I chalked this up to my own thick-headedness and prepared for three months of misery in Morocco, stumbling and stuttering my way around with my inadequate français.

Once in Morocco, however, I discovered something wonderful. Being a Francophone country, most Moroccans of course speak perfect French. But rarely is it their first language – that’s usually Arabic. And so while speaking French on the streets of Lyon or Paris will expose you to all manner of slang, odd expressions, and rapid-fire pronunciation, not to mention unveiled disdain, Moroccans (and other second-language Francophones) speak a refined, clear, textbook version of French. It’s easier to comprehend, you learn much faster from it, and they couldn’t care less if you botched it. It’s not their language to protect!

This is probably true for a lot of languages. Often times, especially as a beginner, it’s far more enjoyable to speak with someone who also speaks that language as a second or third tongue. Sure, you’ll only really get good speaking with a mother-tonguer, but when you speak French with a Moroccan, all the pressure’s off.

What are your experiences? Which cultures have you found reward you for trying out their languages, and which ones punish you for it?