Let’s All Gang Up on the Multilinguals: Three Ways to Combat Language Learner’s Envy Posted by Malachi Rempen on Apr 21, 2014 in Archived Posts 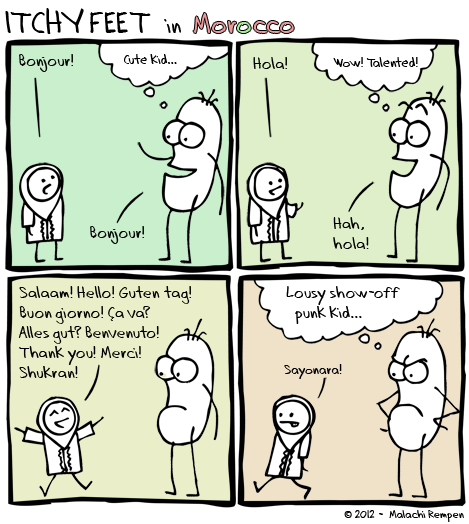 When I lived in Morocco in 2012, it was in Al Hoceima, a seaside town on the Mediterranean coast. Built by the Spanish in the mid-1920s, Al Hoceima became Moroccan in the 1950s after independence, but as such a young city, it retained a lot of its international influence. The majority of locals in Al Hoceima with a basic education grow up speaking fluent Moroccan Arabic, Standard Arabic, French, Spanish, and Tamazight (the regional flavor of Berber).

That’s just where they start.

Many people I met during my time there also spoke another language or two on top of that: English, German, Italian, or Dutch were popular choices due to emigration. In Berlin, where I currently live, I have a friend who speaks Spanish, English, and German as mother languages. Perfectly! He never studied any of them, he just grew up in a multilingual household. His father speaks fluently every single language I’m trying to learn, plus a few more to rub it in. It’s really quite unfair.

Meeting others that can speak 3+ languages as a mother tongue can be a bit frustrating. “Look at the head start they had,” you tell yourself. “I know that learning languages is easier after the second or third language. They’ve already accomplished what I set out to do, three times over! Plus, it’s harder to learn languages the older you get! How am I ever supposed to catch up?” Believe me, I’ve been there. In fact, I’m there right now.

Just stop, breathe deep, and take that noose off from around your neck, my friend. It’s not over until it’s over! Let’s cheer each other up.

First, remember that you already speak a mother language! As you read this, somewhere, someone is trying desperately to learn your language, and probably having a hell of a time of it. All those exceptions to the grammar rules? All those figures of speech and weird verb endings? You don’t even have to think about it. So, pat on the back. You’re the master, they are the pupils.

Secondly, it’s never too late to start. That goes for pretty much everything. Yeah, mastering a language takes a long time, and it helps to start early, if only to have the head start. But it doesn’t take forever. Do you know why kids are so good at learning new languages? Sure, part of it is that their brains are little information sponges. But they also spend most of their time learning! The vast majority of their waking hours are spent struggling with language comprehension, pronunciation, and grammar. How many hours a day do you spend working on your language learning? One? Three? You know, you can always drop everything and move to a small village in the Alps to immerse yourself in German. I guarantee you’ll be fluent after a year. What’s stopping you?

(Very interesting side note: I spoke to a guy once who was in the French Foreign Legion. For those that don’t know, any non-French citizen can join at any time, no questions asked. From day one, however, it’s required you speak French and only French. For those that don’t, you’re paired with a French-speaker whose responsibility it is to get you up to speed. It’s total immersion. This guy claimed that within 3 months under those conditions, everyone is fluent in French.)

Third, it’s not a race. There’s no finish line. To paraphrase a wiser wizard than myself, all you have to worry about is what to do with the time you’ve got. Nobody gets a reward for learning ten languages, or punished for knowing just one. You’re not competing against people who are better than you. Set yourself a goal, then do your best to reach it. What more is there?

Besides, remember that 90% of native multi-language speakers are jerks, and it’s probably harder to be them than it is to be you. Okay, just kidding, I’m not prejudiced. Some of my best friends speak multiple languages fluently, I swear! But seriously, there’s nothing to be done but buckle down and get back to it. Nothing worth doing is easy to do, and there are so many rewarding benchmarks to learning a language. There’s really nothing like your first successful conversation with someone in a language you’re learning. It’s exhilarating.

You might just say it would take all the fun out of learning it if you already grew up speaking it!

What have been your experiences? Did you grow up speaking several languages? I know some people lose their childhood languages. What’s that like? What kind of immersive experiences have you had? How many of you can speak multiple languages as mother tongues? Now, who wants to join me in beating those people up?