Last summer I spent a little over a month in the DRC, or Democratic Republic of Congo, for work. As the DRC is a Francophone country, and my trilingual colleague did not feature French on his résumé of tongues, it was up to me to break out my rusty français. 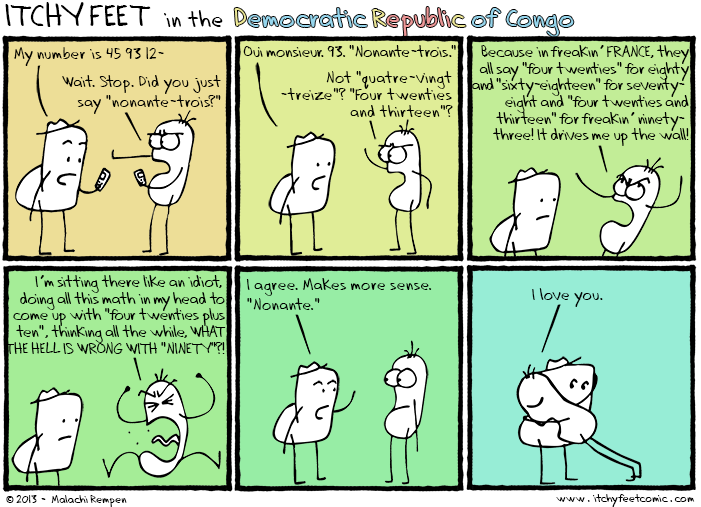 It did not go as well as it could have.

I hadn’t spoken a word of the language of love since I left Morocco almost two years prior, and even then it was teetering between “conversational” and “insulting.” I never studied French a day in my life, and in fact French was never on my to-do list until I moved to Lyon for . . . well, for love. Go figure.

So I wasn’t the best-prepared French speaker in the Congo. We had a driver (it wasn’t a fancy thing—if you don’t want to get stopped by military police looking for bribes, you need a driver and a mean-looking Jeep) and I recall joking to him that my French wasn’t very good. “It’s true,” he said seriously. “Your French is not very good.”

I also had a hard time with the local accent. In Western DRC, the local language is Lingala, which is an extremely simplified vernacular with about 7 words (give or take). As such, they fill in the considerable blanks with French, or French-ish Congolese slang, and these odd figures of speech and idiosyncratic jargon bled into their regular French. Even on a good day, it’s tough to understand a native French speaker going all-out, but add to that a layer of linguistic color Congolese-style, and you might find yourself quite lost.

That said, there were certain quite wonderful aspects. The first, of course, is that since for the locals French is an adopted language, nobody really cared if you butchered it. They did it too (probably on purpose, to spite the former colonies). The second were the fun little phrases you did pick up—for instance, a common greeting in French is the simple ça va? This just means, “going well?” The usual response is ça va again (“yep, going well”) or, if you’re really off your game, ça va mal (“going badly”). In the Congo, they would rarely admit to things going badly. Rather, they said ça va en peu (“going well, a little bit”). It’s such a subtle understatement, it’s almost too French.

But the final specific thing I loved about Congolese French was that they didn’t use the utterly absurd French counting system, as demonstrated in the above comic (essentially, for 70, 80, 90 they literally say “sixty-ten,” “four-twenties,” and “four-twenties-ten.” This can get confusing very fast if you’re not used to it). For you see, the DRC used to be the Belgian Congo, so they’re actually speaking Belgian French. And in Belgium, like in Switzerland, they use the perfectly reasonable and civilized system of saying “seventy, eighty, ninety,” for which I love them.

Funnily enough, I looked into it, and it turns out that nobody really knows why the French still use this bizarre way of counting. We do know that in the Middle Ages, it was even worse—they had vingt et dis (“twenty-and-ten,” for 30), deux vingts (“two twenties,” for 40), trois vingts (“three twenties,” for 60) and even quinze-vingts (“fifteen twenties,” for 300). Maybe they wanted to teach everyone basic arithmetic and this was the only thing they could think of.

But have no fear! Those days, grâce à Dieu, are dead and gone.

So if you’re studying French or living in France, and your daily life is made a little bit more miserable thanks to their silly way of counting, just know that it doesn’t have to be that way. You can always move to Belgium, or Switzerland, or the Democratic Republic of Congo.

What about you? Are you learning a language and struggling with something that isn’t at all difficult in other languages?