How to Determine Your Language Proficiency Level Posted by meaghan on Oct 22, 2014 in For Learners

You’ve heard the mantra: How can you know where you’re going if you don’t know where you’ve been? Cliché as it may be, this concept applies perfectly to learning a language. Knowing where you stand will help you set realistic goals, identify the resources that are best-suited for your level, and measure your progress over time.

So, here comes the obvious question: how do you determine your level in a given language? There are a few different well-known frameworks for assessing language learners by level:

Originally developed by the U.S. State Department’s Foreign Service Institute (FSI), and still known to many as the FSI scale, the ILR scale has been adopted as the standard measure of language proficiency for all U.S. Government agencies. The ILR describes learner proficiency on a rising scale ranging from 0-5, using plus (+) level designations between each base level to indicate that, while a learner has mastered the base level below and is able meet some of the requirements for the base level above, they are not yet able to sustain performance at that higher level.

There is no actual “ILR exam”. The ILR does not actually administer tests. Rather, various government agencies use the ILR proficiency descriptors as a common measure of performance on their own specific language exams. The Foreign Service Institute, for example, administers their own custom language tests developed for Foreign Service officers, while the Defense Language Institute administers a different battery of tests developed for military personnel. I wouldn’t get your hopes up just to dash them like this though! While ILR-based tests are only available to U.S. government employees, the ILR does offer self-assessments, which you can find in the “Self Assessment” section at the bottom of this page. Want something more formal? Check out the next two options!

Developed from the ILR scale, the ACTFL scale has 4 main levels (Novice, Intermediate, Advanced, and Superior), the first 3 of which are divided into 3 sub-levels (Low, Mid, and High). The guidelines for these levels are quite specific, especially at the lower levels. You can read about them on the ACTFL site here. 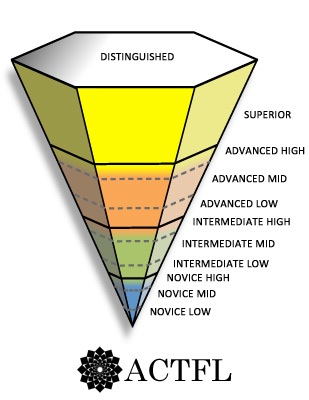 Unlike the ILR, ACTFL does administer proficiency tests—more than 200,000 every year! They offer oral proficiency tests in more than 100 languages, and also administer separate tests for measuring listening, reading, and writing proficiency. You can learn more about these tests  on the ACTFL site here.

Designed by the Council of Europe, the CEFR is widely accepted as the European standard for measuring language proficiency. The framework consists of 6 levels, with fully elaborated descriptors and can-do statements for reading, writing, listening, and speaking. A global scale is also provided to make it easier to communicate the system to non-specialist users and to provide teachers and curriculum planners working in different countries and languages with common orientation points: 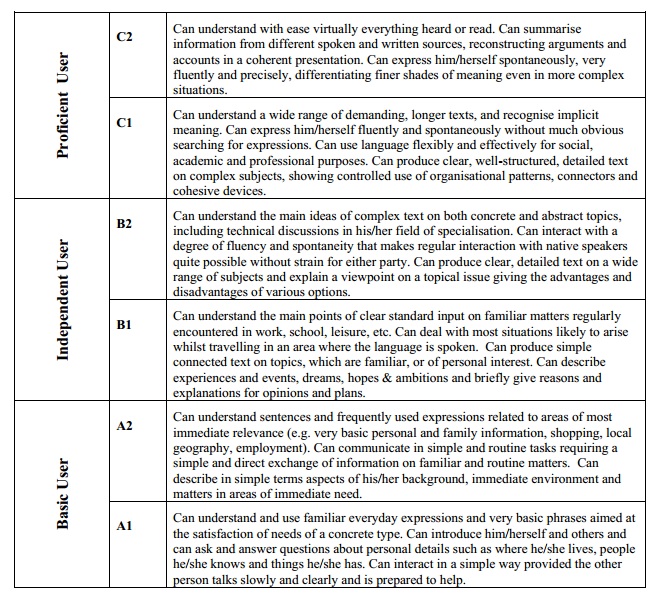 Image from Council of Europe

Similar to the ILR, the Council of Europe does not offer a “CEFR exam”. Various testing centers and universities throughout Europe offer their own exams, aligned with the CEFR scale. If you’re looking to determine your CEFR level in a given language, you’ll want to sign up for one of these exams, such as:

How do these proficiency scales relate?

Language proficiency is a continuum, and any attempt to divide that continuum up into distinct levels of proficiency will be imperfect. The ILR, CEFR and ACTFL proficiency scales each emphasize slightly different aspects of language proficiency and establish boundary markers at different points along that continuum. As such, they are not strictly comparable and one can’t really say that a particular level on one scale is the same as a given level on another scale. But many are interested in how the scales are related, so here’s an approximate comparison chart for receptive skill proficiency that many in the language community would consider imperfect, but not too far off.

To better understand how CEFR corresponds to ACTFL and ILR, we recommend this paper by Erwin Tschirner,