How to Keep Multiple Languages Straight Posted by Malachi Rempen on Nov 19, 2014 in Language Learning 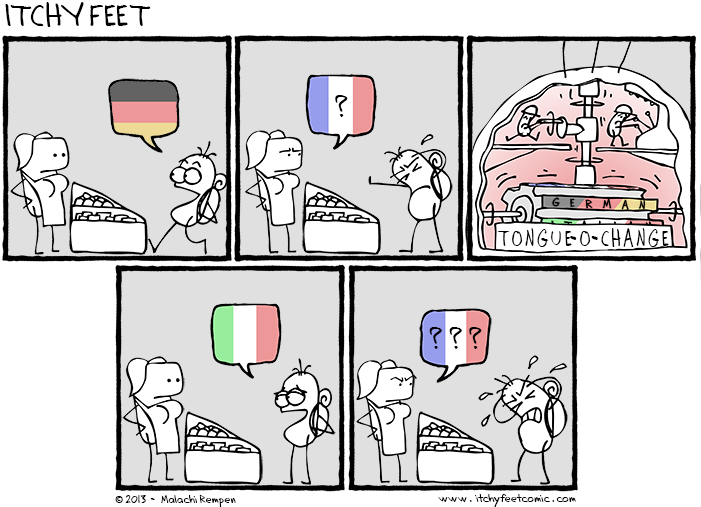 Learning a new language is an immense challenge, what with all the grammar, vocabulary, expressions and idioms, and pronunciation to deal with. If you then toss another language or two (or five or ten) on top of that, the challenges compound themselves into a heap.

For me, vocabulary is the hardest—for every new language I learn, I know I have to learn yet another word for the same things, and I invariably get them mixed up. Even more frustrating is knowing a certain word in three languages, but not the one I’m speaking at that moment.

Then there’s getting the languages confused. For some reason, I find that my brain has a shelf labeled “foreign language”, and I’m allowed to stash one language at a time there. If I need to change to a different one on the fly, I have to will the gears in my brain to change, requiring a fair amount of time and effort (see above comic).

Depending on the language, though, you don’t always have to start at the bottom. Learning romance languages is great because the grammar is basically the same across the board, with a few exceptions and oddities here and there. Plus, since they’re all based on Latin, a great number of words are the same. And the more complicated the word, the more likely it is to be the same in all the romance languages. If you’re reading this article you have a huge head start on Spanish and French, since you already know words like “complicated” and “exception” and “pronunciation” (watch out for false friends like “embarrassed”, though, or you’ll be telling everyone in Madrid you’re pregnant).

I find it helps a lot to be in the country where they speak the language you’re trying to learn. That may sound obvious, but it’s much easier to speak German in Germany, and Italian in Italy. The words and phrases just seem to spring to your tongue in a conversation, quick and easy. Try speaking German in Italy, though, and you’ll feel like you’re dragging it up out of a thick mud. There’s something in the atmosphere that pushes you, like a breeze, to speak the language of the locals.

Since drawing the above comic, I’ve also learned to have a different “voice” for each language I speak. I create a literal cartoon character in my head when I’m speaking, and it comes out through the language. German is a stout, jolly mustachioed man, and Italian is a slickly-dressed charmer. It doesn’t just help to separate the languages mentally, it also helps you get into the proper cadence of speaking, which is usually quite tricky. Just don’t overdo it, or you’ll look and sound like an ass.

Most importantly, keep practicing. Many polyglots recommend at least a few hours a week for each language. The more languages you collect, the more hours a week you’ll have to practice. But it’s worth it.

What about you? What tricks have you polyglots learned to keep your many languages straight?