Singing the Tongue-Song: Accents and Cadence Posted by Malachi Rempen on Feb 16, 2015 in Archived Posts 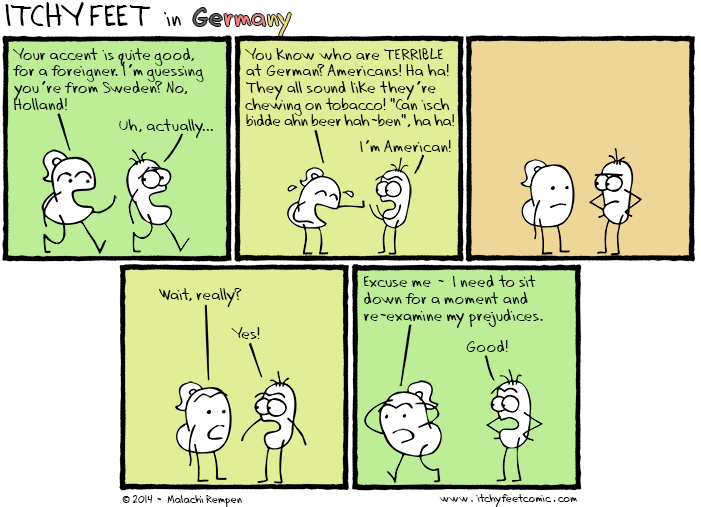 I wonder sometimes whether skill with accents can be learned or if it’s just innate—you have it or you don’t, like the ability to keep a beat. If I were to guess, I’d say it has to do with a totally different part of the brain than grammar or vocabulary. Maybe the same part of the brain that regulates how good you are at doing impressions. I imagine you have to have an ear for it, meaning you’d have to be able to notice and pay attention not just to what people are saying, but also how they’re saying it, and then reproduce it yourself.

After all, an accent is much more than just the pronunciation of words. Accent has a lot to do with the cadence or song of how a language is spoken. In every language (also every regional accent, for those that vary widely within a language), the sentences go up or down in a very specific, unique way. For a long time I’ve wanted to do a comic about this phenomenon, but I just can’t figure out how to represent it visually. Maybe something like this graphical depiction of how my Italian wife would say:

Or that might be even more confusing. Point is, the ability to reproduce this tongue-song is a special skill, and completely independent from having a wide vocabulary or knowing grammar rules.

I know an American fellow who’s lived here in Berlin for 25 years, has a German wife and five bilingual kids, and teaches in German—he’s totally fluent, and yet his accent is so harsh, it sounds like he just picked up the language yesterday. I have another friend who doesn’t speak any languages fluently, but is killer at accents. He can do all the various English regional accents to perfection, and when he tries to speak Italian or French, he can even fool a native speaker, if just for a moment.

As the comic above tries to point out, no one group of people is “good” or “bad” with accents. If you think Americans are bad with accents, you’re probably just remember that one American with a terrible one (maybe we know the same guy…!).

I’m not an accent whiz, but I’d say I’m better than average. To me, it’s important to get that cadence down, as well as proper pronunciation, so I listen very carefully to native speakers and try to reproduce their song when I speak. It’s helped a lot. Native speakers can tell I’m not native, but they don’t know where exactly I’m from, and that helps me build a unique first impression that isn’t founded on some cultural stereotype.

I can also get away with not being fluent. A lot of native speakers give me high marks, even if I know they’re undeserved, just for pronouncing “Volkshochschule” correctly, or for using their patented cadence:

What do you think? How’s your foreign accent? Do you know people who can’t pronounce to save their lives, or others who are accent geniuses? Is it possible to learn it, or are we just born with this skill?