You’re Just Too Polite for Your Own Good Posted by Malachi Rempen on Mar 11, 2015 in Language Learning, Uncategorized

I have a bad habit that I often fall into when I speak a foreign language: I try to please the listener, at my own expense. 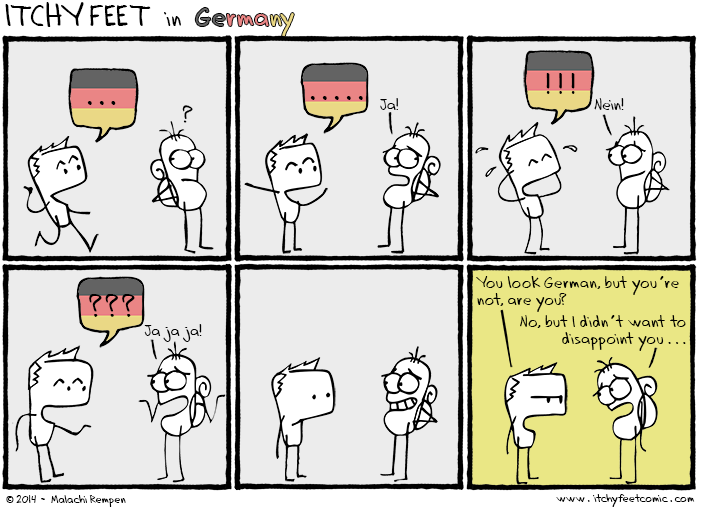 Come to think of it, this might just be a bad habit of mine in general, in any language. Who doesn’t want to be seen a good light by the person they’re speaking to? We test the waters with various jokes or anecdotes, pay attention to what the other person laughs at, doesn’t get, or frowns at, and we adjust accordingly. I do this, anyway. Whoever I’m talking to, I want them to feel comfortable in my presence.

But with foreign languages in particular, I often offer this comfort at my own expense, in various ways. I might, for example, use incorrect English on purpose, if I notice the person I’m talking to is doing it, so they don’t feel bad about the errors. If I’ve been mistaken for a native speaker, I might speak really fast or mumble, slurring my words together to give the impression that I’m a totally fluent local, so as not to break the illusion. Worst of all, I often don’t want to interrupt the flow of conversation by asking what a particular word means, so I’ll just smile and nod and pretend to know exactly what we’re talking about.

These aren’t conscious decisions, of course. They’re just habits I need to break.

Using incorrect English on purpose has obvious consequences—my own wife continues to make certain small, silly mistakes because I’ve started using them too. Muttering and mumbling to try to sound fluent isn’t just making me more incomprehensible, it also inhibits my ability to “proofread” myself while I’m talking, taking note of where I’ve said something I know is incorrect, and how to say it right next time. If I don’t ask what a word means, and I can’t grasp it from the context of the conversation, how am I supposed to learn it without carrying around a dictionary?

In language learning, as in life, you’ve got to allow yourself to be uncomfortable. No two ways about it. For me, that means accepting that I might possibly embarrass, surprise, or irritate the person I’m speaking to—even though the most likely scenario is that they won’t mind at all. Most people are perfectly friendly. I just need to get over it.

What about you? Do you try to gratify others at your own expense, or do you have some other bad habits that need breaking?