Losing Your Mother Tongue? Good! Posted by Malachi Rempen on May 13, 2015 in Archived Posts 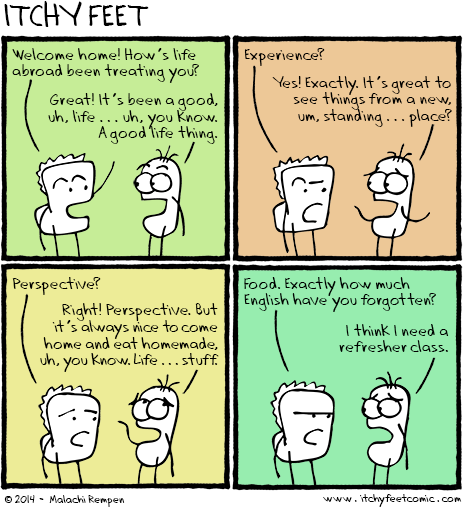 When I first moved abroad, I’d heard the tales, as I’m sure you have: the stories of foreigners or expats so immersed, so integrated in their new home culture, so saturated by the foreign language that they actually began to forget their native tongue. Now that, I thought, is brilliant! Surely, these talented language learners must be operating on a level beyond mere fluency—their adopted language has actually begun to displace their mother tongue, seeping into every corner of their subconscious brain like a glorious multilingual parasite.

Oh, what I would give to play host to such a parasite myself, but alas! It could never happen to me. I’m an English native speaker, after all, and it’s simply not possible to escape English for long enough to start actually losing proficiency in it—certainly not in Europe, and certainly certainly not in Berlin, where some days I hear more English on the streets than German. I’d have to migrate to small Dorf and rent a Zimmer from an elderly Frau and her dachshund before my English began to suffer.

Or so I thought.

I recently took a C1 course in German, but I never took the test, so I’d say I’m at a comfortable B2 / uncomfortable C1-level. By some definitions, that’s fluent, but I’d call it borderline at best. It’s certainly nowhere near mother tongue-level, which I believed it would have to be to displace my English. I speak plenty of English throughout my day, as a good portion of my friends are either English native speakers or I don’t know their native language, so it’s not like I’m out of practice.

And yet, recently, I’ve been finding myself unable to produce certain English words.

It’s not quite as bad as the comic above, but in several conversations recently I’ve been at a loss. I know the word I’m thinking of exists, and I know I used to know how to use it, but there’s simply a glaring black hole in my brain where this word used to be. It’s as though my English vocabulary occasionally puts up a “Gone Fishin’” sign, and I’m left to grapple with rephrasing it.

It’s an experience I have all the time in the languages I’m learning—I learn a word, then don’t use it for a while and forget it, and I have to relearn it, or at least be reminded of it. But in English? That’s never happened before. This is scary, wonderful new territory for me. My only guess as to the cause is the aforementioned C1 course. I gorged myself on new vocabulary during that course, filling my flashcard app to the brim every evening and drilling them into my brain every morning. I guess my brain can only take so much. Or perhaps it’s temporary, and in a few weeks my German and English vocabulary can learn to peacefully coexist. Wouldn’t that be nice?

How about you? Have you lost bits and pieces of your native tongue as you cram more interesting languages into your noggin?