Lost in Translation: Untranslatable Words and Phrases Posted by Malachi Rempen on Jul 6, 2015 in Uncategorized

Let’s face it; there are some things that language simply cannot help us express. Religious experiences, travel experiences, life experiences – really any kind of personal, subjective experience is difficult to put into words that will accurately portray the experience being had. But don’t feel bad, that’s not your job; that’s why we pay poets the big bucks. 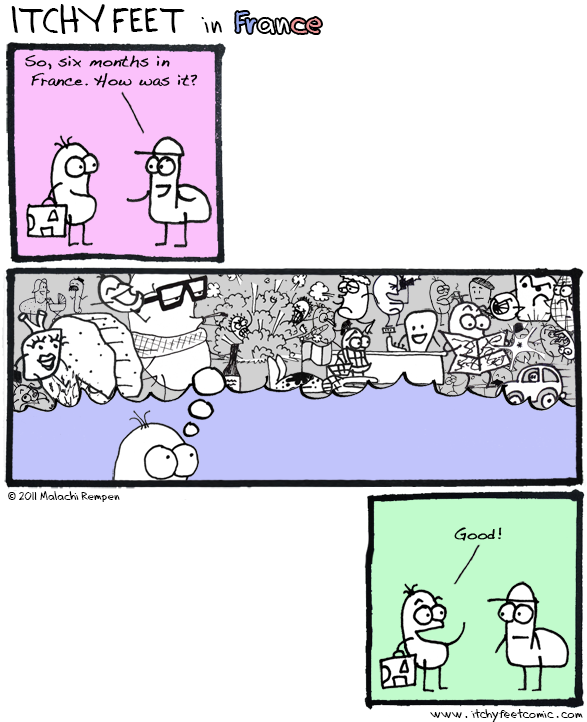 But language isn’t just clumsy to communicate experiences with. Even between languages, there is plenty of mutual unintelligibility to go around. I’m a big fan of these linguistic loopholes: words or phrases that have no clear translation into other languages. I like them because they remind us how incomplete language can be—not just in communicating how your six months in France went, but also ideas that others may take for granted. Language, after all, is a moving, living thing, and it’s never “finished.”

But enough waxing philosophical. Here’s my incomplete List of Untranslateables that Should be English Words:

Jayus (Indonesian): a joke that is told so incompetently told, or that is so unfunny, that you can’t help but laugh

Saudade (Portuguese): an intense desire or longing for something you can’t get back

Schadenfreude (German): taking pleasure from the misfortune of others

Torschlusspanik (German): literally, “door-closing panic”; the panic one feels when realizing that opportunities diminish as one ages

Ya’aburnee (Arabic): literally, “you bury me”; your declared hope that you will die before the person you’re speaking to because you couldn’t bear to lose them

Age-otori (Japanese): a haircut that makes you look worse than before

Luftmensch (Yiddish): literally, “air person” (although it sounds better); a dreamer, someone with their head in the clouds

L’appel du vide (French): (I’m so glad I found this one, because I oddly feel it all the time and have never discovered a term for it) – when you’re up high on a bridge or a tall building, the odd urge you get (literally, “call of the void”) to leap off

Culaccino (Italian): the little ring-shaped stain left on a table by a wet glass or mug

Gufra (Arabic): the quantity of water that can be held in your cupped hands

Iktsuarpok (Inuit): frustration at waiting for someone to show up

Utepils (Norwegian): to sit outside on a sunny day, enjoying a beer

Tartle (Scottish): when introducing someone, the moment of hesitation where you realize you don’t remember their name

Backpfeifengesicht (German): a face which needs a good slapping

Esprit d’escalier (French): literally, “the wit of the staircase”; the perfect comeback you didn’t think of until walking down the stairs fifteen minutes later

Sisu (Finnish): someone who is utterly unconquerable; an indomitable badass of unsurpassed tenacity and doggedness in the face of all odds

Pochemuchka (Russian): someone who asks too many questions

Tingo (Pascuense): to habitually borrow things from a neighbor or friend until they have nothing left

Prozvonit (Czech), dar un toque (Spanish), fare uno squillo (Italian): the act of calling someone but only letting it ring once, so they’ll have to call you back and you won’t have to spend any money (I never heard of this until I moved to Europe, where top-up phones are a thing)

Any good ones that I missed? How about delightful words from English that aren’t translatable in your native language?