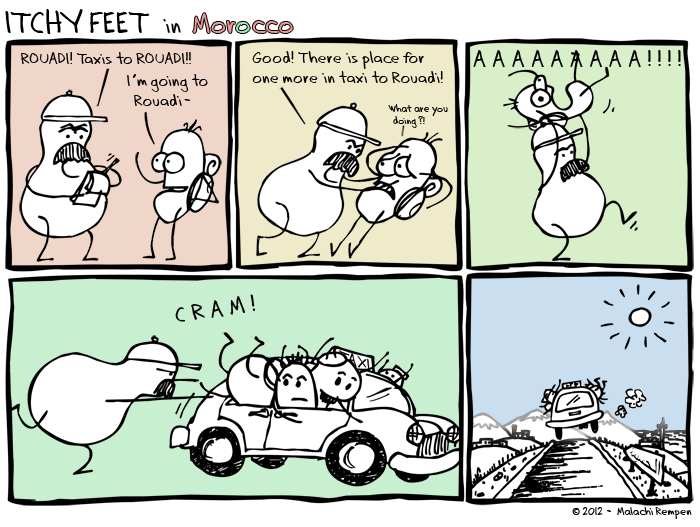 Let’s say you read this previous post of mine, encouraging you to go and not just speak, but learn new languages out in the real world, where those languages are being spoken. Let’s say you decided, “you know what, that guy that does those web comics is right! I’ve got to get out to where this language is spoken by the people!” and you bought a plane ticket right there and then. Let’s say you are now reading this from the comfort of your new home in whatever exotic new foreign land you’ve decided to uproot to, excited to begin your new and improved language-learning experience.

You’re now going to have to do things their way. And that may not be as easy as it sounds.

Like in the comic above, traveling and living in foreign countries involves adopting the local way of doing things. “Do as the Romans do,” and all that. If you haven’t traveled much before (and even if you have), you’re going to go with a set of pre-determined biases, prejudices and a certain worldview – that can’t be helped, of course. It’s not YOUR fault you were raised in a place by people with a culture. But you’re going to find that even if you’re completely open to having that worldview challenged (which you should be), it’s going to be a lot harder than you imagined. And there are aspects of your worldview you didn’t even know could be challenged. You thought they were, well, the truth.

And that’s all part of the fun of travel and life in foreign countries. But what’s it got to do with language learning?

Well, even if you go to a foreign place with the sole intention of improving a language you’re learning, without any particular interest in broadening your cultural horizons or any view to stretching the limits of your comfort zone, you’re going to find that – surprise! – language is culture, and the two are inextricably tangled in unusual ways. You’re going to be culturally broadsided, that’s a simple fact.

Here’s an example. When I moved to Germany in 2012, I had just left Morocco, where I lived for some months previous (during which time I created the comic above, among others). I knew, when I left for Morocco, that it would be a culture-bending experience for me. How could it not? The people, the language, the food, the customs–everything was new and different and interesting. And deeper than the surface differences, there were also unexpected, deep-rooted ethical values that differed between myself and the local population. But really, all that is to some degree to be expected. It’s Morocco, after all.

But when I moved to Germany, I did not go for the culture. I did not go to have any of my horizons expanded. I felt they had just been expanded quite enough, thanks, and I’d like to get back to real life, now, if that’s all right. I went to learn German, and to get a job – in that order. What happened, of course, was that because I wasn’t expecting the cultural differences in Germany to be anything particularly steep, I got broadsided by them all the more, through learning the language.

The German cultural respect for the rules, interest in tidiness and order and sense of humor are all reflected in the language. There are very few exceptions to grammatical rules in the German language, so once you’ve mastered that rule, it’s applicable across the board. German love of rules for their own sake extends to such things as adjective declensions, which I declare are pointless busy work that don’t communicate any useful information, but no one listens to what I have to say about it. The German’s love of function over form is also evident in the way they can string words together into one long compound word, like Siebentausendzweihundertvierundfünfzig, the word for the integer 7,254. It makes practical sense to combine words into one. It’s very efficient, but it isn’t all that pretty (not that you’re any better, French). And, of course, Germans put a lot of value in their beloved certificates and other officially-sanctioned validations, which is why their system of honorifics (“Mr. Dr. Dr. Professor Schmidt, please”) can appear so ridiculous to those from the outside.

In coming to Germany with the sole intention of learning its language, I in fact got a mouthful of its culture and worldview. It’s impossible to separate a language from its culture, and while that may seem obvious to you now, just wait till you’re learning Japanese and bending your mind over their vast webs of societal hierarchies.

I should point out that you don’t have to travel across the globe for this to be the case. Sometimes all it takes is to head a few hours out of town, where you’ll see the countryside people’s laid-back attitudes reflected in their drawl and loose grammar, or the next city over’s love of a particular sports team mirrored in a favored local expression. Stay too long in one place, and you’re not only going to speak like a local, but think like a local – you’re going to be doing things their way.

What about you? What experiences have you had learning languages in foreign countries?