Where to Find Shows in Your Language Online Posted by Jakob Gibbons on Dec 16, 2015 in Archived Posts

We recently told you why using TV to boost your language learning is definitely a good idea. Since so many of you agreed, we wanted to give the rest of you some tips on where to find TV shows in your target language. If your two greatest loves are learning languages and sitting on the couch with a big of chips, then this post is basically the user manual to your soul.

You don’t have to board a flight to the country of your target language, and you don’t have to pay for some expensive streaming service either. There’s plenty of free stuff waiting for you right here on the big beautiful Internet — you just need to know where to find it!

This is a very short introduction to some of the places you can dig up and consume international media, so while there’s something on this list for everyone, don’t hesitate to ask Professor Google for some more resources like these. Keep in mind that a few of these services are only available to IP addresses in certain countries, which means you may want to look into a VPN or other unblocker for some of them.

Based on my own experience spending hours a day “studying languages”, here are six of the basic types of resources you can use to find media in your target language online.

Netflix and language learning are a match made in heaven. If you’re already a subscriber, you may have noticed that there are plenty of shows and movies in Spanish, and others under categories like ‘international documentaries’. Depending on where you live, your language options might be different, but be careful playing with VPNs — Netflix recently started heavily implying that it would cancel users’ accounts if they engage in this kind of “improper use” of the service. Watch at your own risk!

Pro Tip: For Spanish learners, take a look at the detailed post on our Spanish Language and Culture blog about using Netflix for language learning. All the examples are of Spanish-language programs, but the principles apply to all languages! 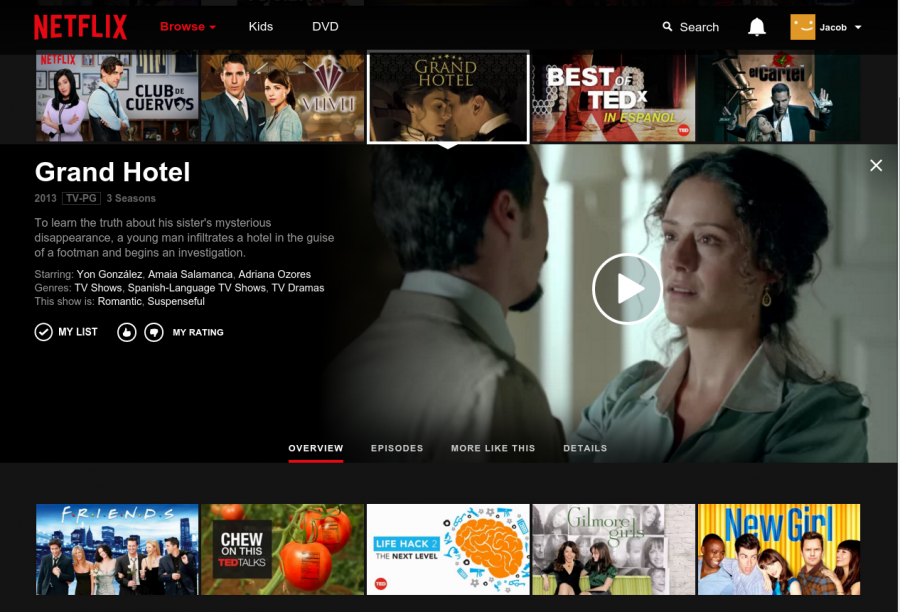 For Spanish learners especially, Netflix has plenty of binge-worthy shows like Gran Hotel.

I’m not sure when or where these little gems came from, but let the world of language learners rejoice that they’ve manifested online. Sites like Streema, Giniko, and SPB TV (which has a mobile app for Android and iPhone) all collect heaps of international TV from across the web and make them available to you for free.

Streema is my favorite of these three, as it seems to have the most languages and channels available, and its layout is pretty user-friendly. It markets itself mostly as an international radio app, and so has plenty of radio stations available as well! Just browse by region or country and click on the channel of your choice. With choices ranging from world languages to Ethiopian broadcasts in Amharic, you’re sure to find something that works for you.

Pro Tip: There are tons of other ‘free TV’ apps and sites out there, but tread carefully: most of them will leave your computer devoured by malware. The three I’ve recommended here are probably not the only safe options out there, but stream at your own risk!

Most countries have some form of public broadcasting that’s made available for free to all citizens, and in 2015 most of them are available online too. Depending on a million different complexities of international copyright law, the video on these websites may or may not be available outside the country that produces them, so if you try some of these examples and get funny error messages, consider trying a VPN before giving up.

TV Brasil, for example, streams sem problema for me in the US, and likewise, most of the programs on the Nederlandse Publieke Omroep stream in beautiful Dutch. But if I want to watch the nightly news program Nieuwsuur, I’ll need to convince my browser that I’m in the Netherlands, due to the frequent footage of football matches that are wrapped up in copyright restrictions.

Pro Tip: Search in your target language for “watch [language/country] public television online”. Websites like these are ultimately intended for the locals, so if you search like a local, you’ll likely get better results.

BBC, CNN, SkyNews, RT, and Al Jazeera all want money from around the whole world, so they kindly produce news and other media in many languages. Al Jazeera Arabic is just a couple clicks away, though you’ll need a VPN to watch it in most countries, but CNN Türk has no such geographic hangups. Euronews is another that (in combination with a European IP address) offers streaming news in over a dozen languages.

Pro Tip: Countries with international reputation problems frequently produce news media in one or more world languages and broadcast it for free online to improve their PR. Iran’s HispanTV is a Spanish broadcast designed to strengthen relations with Latin America, and China Central Television broadcasts a Chinese perspective on current events via CCTV Français for the francophone world.

Speaking of the BBC, their website has a surprising wealth of information and media resources in its Languages section. Large world languages and languages with many learners like Chinese and Italian offer several different news, TV, and radio resources, whereas some of the smaller or less common languages on BBC’s page offer fewer resources. Don’t forget to check out the ‘news in your language’ page, where BBC’s own news (and sometimes streaming broadcasts) are available in languages from Hausa to Tamil and everything in between.

Pro Tip: BBC offers a lot more resources for some languages than others. On the Languages home page in the center under “choose a language”, all of the seven languages displayed except Greek list one or more online TV stations. Those under the “…and 33 more” link mostly list basic phrases, facts about the languages, and a few links to some media resources like Youtube videos.

Youtube is one of the most versatile ways of finding TV shows in a foreign language, but it can be a bit hit-or-miss. It can be done (and I’ve done it many times), but sometimes it’ll take some initial research into specific shows in your target language.

If you’re looking for a particular language or particular show and can’t find it on the corresponding language channel, try googling. Write your search query in the target language to search for, for example, “Canadian TV shows on Youtube” or the name of the particular show.

Like I said, these are just a few of your options for finding foreign language television online. Depending on your budget, how much time you can devote to googling, and the legal details, the Internet is bursting with not only ALL THE TV, but, lucky for us, it’s in ALL THE LANGUAGES.

And what’s better than spending your ‘study time’ sprawled out on the couch?

Do you have another website or method you use for finding TV shows in the language you’re learning? Tell us about it in the comments!