3 Languages With Surprising Origins Posted by Malachi Rempen on Feb 17, 2016 in Archived Posts 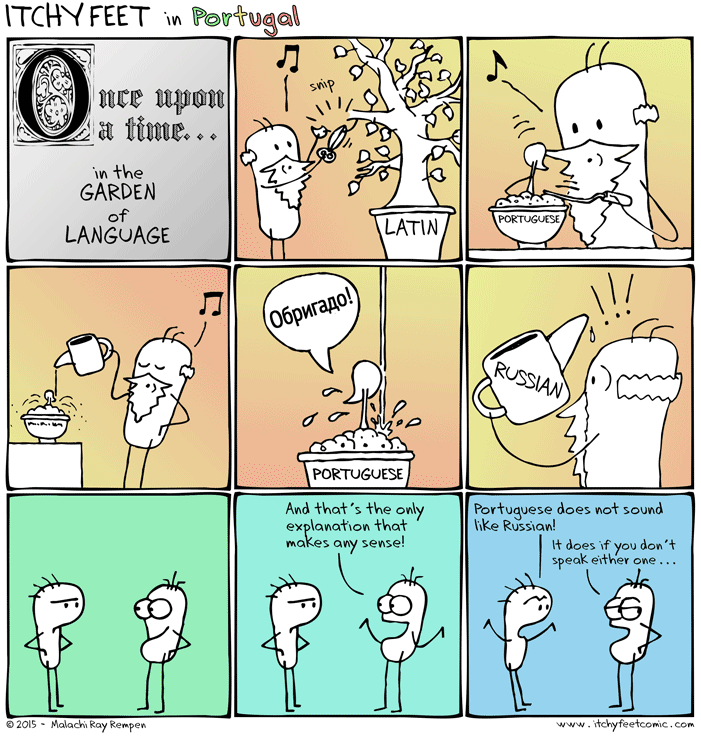 I like to imagine that languages branch off one another like leaves on a tree, growing and growing and then, when the time is right, sprouting new languages of their own. This is an attractive and popular visual metaphor, but we all know that languages don’t evolve along straight paths from singular roots. More accurate would probably be one of those round things that artists hold to mix their paints with; the languages are smushed and squashed and swirled around one another, temporarily coming into their own before being returned to the vortex.

So despite the fact that languages don’t really have distinct origins (or trajectories), I’d like to share my discoveries of the surprising ancestral roots of three particular languages. If you speak these languages or know anything about them (as you’ll soon see, that’s 100% of you), it’s possible you already knew this. Well, allow me to refresh your memory:

No, Portuguese was not watered with the wrong can by the Language God in His Garden, though it did partially derive from Latin, unsurprisingly enough. And it’s also true that Portuguese doesn’t sound much like its Romance cousins Spanish, Italian and French. That’s because while Latin (actually Vulgar Latin, the street-slang version – as opposed to Classical Latin, the stuff you were forced to translate in school) is Portuguese’s mommy, its daddy is the Gallaecian language spoken by natives of the Iberian peninsula before the arrival of those sandaled Romans. Now, Gallaecian – and I do find this surprising and awesome – is actually a Celtic language, brought by those enterprising Celts from England, or Ireland, or France or Germany or wherever it was they came from.

The history of the English language is broken roughly into Old, Middle and Modern periods. During this Middle period of the English language (not the origins, I know, but bear with me), nobody who was anybody spoke it. That is to say, this was the 13th century, and French was the lingua franca of England. All the noblefolk and princely types and well-to-doers spoke French. They wouldn’t dirty their tongues with English, which was the foul, ignoble parlance of the dirty commoners – farmers, peasants, and other riffraff. For this reason, little English influenced French at this time, but plenty of French trickled down into English. That explains why there are so many French words we consider utterly common in English (a lot of military terms, like lieutenant, sergeant, peace, battle, combat and nobility terms like juggler, minstrel, dame, feast, servant, and . . . noble). It also explains why the French are so butt-hurt that English is now the lingua franca; it’s as though our diplomats and businessmen began speaking to one another in Californian surfer slang (“Woah! Totally bodacious treaty, my man”).

(Yes, I’m cheating with another list. I think it’s funny!)

The truth is, we have no idea what the origin of language is, and I find that really surprising. At first glance, I would’ve thought it’d be relatively easy – sure, it’s a vocal mode of communication so it’s hard to trace historically, but surely there’s something in the evolution of our brains that would suggest the time when some sort of “language node” popped up. Apparently not. The date of language’s birth is estimated anywhere between 2 million and 50,000 years ago. That’s such a wide margin, you might as well be playing darts with a hand grenade. Short answer: we have absolutely no clue. It’s been called “the hardest problem in science.”

Now, I looked at the origins of a lot of other languages, like Hindi, Japanese and Arabic, and although I found them totally fascinating, I didn’t find them particularly surprising. But what about you? Do you know of a language with a surprising and interesting history?