Amuse Your Friends: We’ve All Got to Do It Posted by Malachi Rempen on Apr 18, 2016 in Uncategorized

We’ve all been here – we’re learning a language, our casual friends or distant relatives learn about this and are tickled pink to hear us say something in that crazy, weird foreign language. Either it goes like in the comic above, or it goes something like this: 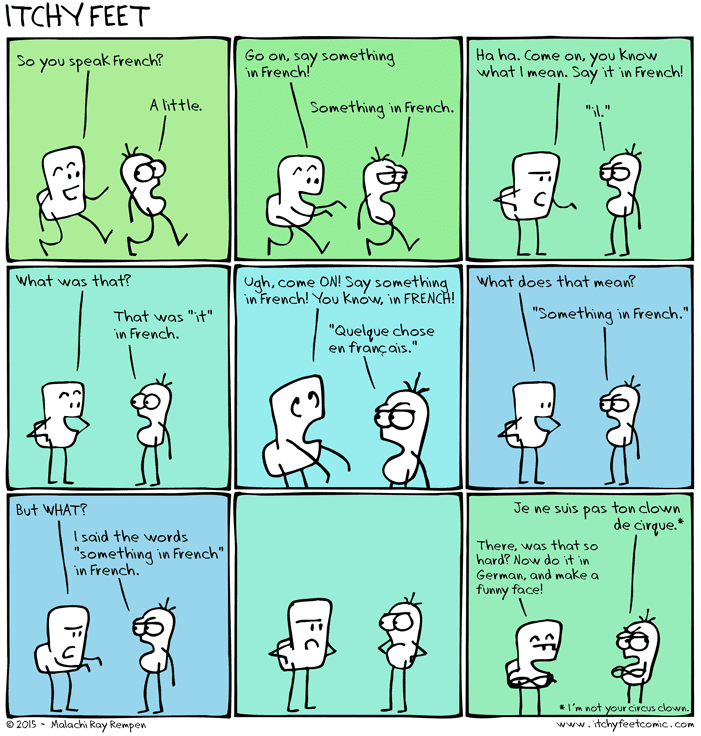 The conversation flatlines, no one is impressed, you’re wondering whether you really do speak that language or you just somehow fooled yourself into believing it.

Don’t feel bad, it’s not your fault. You’ve been put on the spot. I guarantee if you ask your Uncle Calvin to tell you some interesting dentistry fact from his many years in the profession, he’ll stumble and scratch his bald spot and shrug just like you did. Ask your comedian friend to tell your date a funny joke and he’ll probably just sigh and mumble something about a bar and a rabbi. It’s not easy, being put on the spot! We can’t be expected to just conjure up entertainment out of nowhere, just like that! Even circus clowns take smoking breaks.

I’m currently actively learning two languages: German and Italian, and also reluctantly watching a third language, French, gather cobwebs and fall to pieces under the floorboards of my brain. Since I’m the “wacky” friend or relative that lives overseas, going home is generally a parade of people asking me to amuse them with my foreign tongue “know-how,” such as it is. Rather than just stall and falter and end up saying something boring like “hello, my name is Mal” or “today is a Thursday”, I’ve collected a few more interesting, language-specific phrases to surprise and delight, and I’d like to share three of them with you.

German: Dampfschifffahrtsgesellschaftskapitän (translation: “captain of the steamship company”)
Believe it or not, I learned this infamous bizarro German word before I even learned German itself! My dad, a native Deutscher, taught it to me when I was a kid, and I’ve loved it ever since. It’s the perfect word to bust out on the unsuspecting, and watch their eyes grow wider with every syllable. It’s a great segue into how German can compound words, so the conversation can keep going, and you’ll probably make them laugh. There are also lots of hilarious variations on this classic word, so you can add some of your own flavor to it.

Italian: Chi che no gà testa, gà gambe (translation: “a forgetful head makes for weary legs”)
This is sort of cheating, because it’s not strictly Italian – it’s an expression from the dialect of the Veneto region. But I love it, and non-Italian speakers can’t tell the difference anyway. Like English, Italian is as full of useful metaphorical idioms, but this one I’ve never heard an equivalent for in English. I’m constantly forgetting where I put things, or to take things with me, and my legs certainly do tire of carrying me around pointlessly. Sometimes I’ll also showcase the Italian language’s ability to make anything sound utterly delightful: take brufolo (zit) or pipistrello (bat), for example.

French: (TBD)
Actually, I lied. I don’t have one for French! This is why the above comic was written about my “abilities” with the French language – so this is where I need your help! What surprising, conversation-starting French phrase or word can I say that I can keep at the back of my mind, ready to pop on someone who asks? Something unusual, entertaining, which ideally encourages the listener to want to pick up French themselves?

And what about other languages? What are your fallback phrases or words in languages you’re learning which you use to amuse and delight?