Of Polyglots and Multilinguals Posted by Malachi Rempen on Jun 29, 2016 in Archived Posts

You’ve heard this word “polyglot,” no doubt, being thrown around a lot. What the heck does it mean? And what’s the difference between polyglots and multilinguals? And is a “dodecalingual” really a thing? 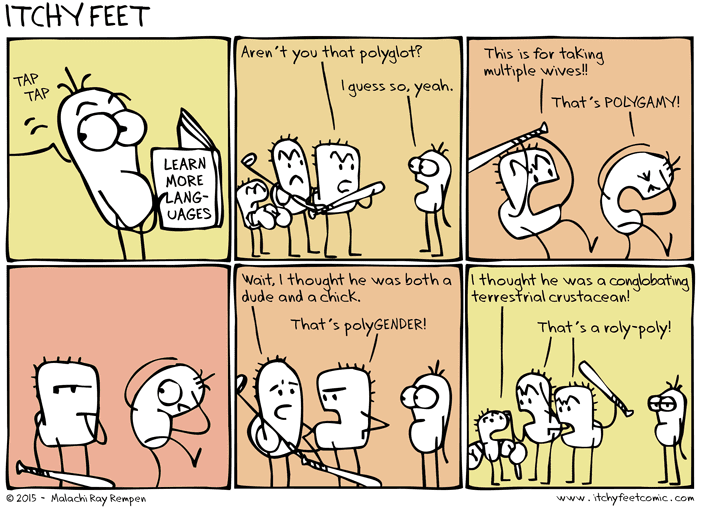 “Polyglot” is kind of a funny word. It sounds more like some kind of insect larva (“after metamorphosis, the squirming polyglot will transform into the majestic glotted spiderfly!“) or a forensic term for blood splatter (“we’ve got a body in the living room, detective, and polyglot all over the curtains“). But it’s nothing quite so entertaining. If you don’t already know, being the language learner that you are, a polyglot is simply the word for someone who speaks several languages. “Poly” of course being the Greek for “many” and “glot” being Greek for “insect larva.” Sorry, I mean “speaking, reading or writing a language.”

Now, “someone who speaks multiple languages” is a pretty vague definition. Wikipedia defines a polyglot as someone who has “mastered” multiple languages, then goes on to ruminate without citation on what “speaking” a language might actually mean. The dictionary offers nothing more concrete with “knowing or using several languages.” What if I have one mother language that I’m fluent in, and I’m a beginner in ten other languages? What if I’m fluent in two languages, but one of them is a dialect? What if I’m fluent in C++ and BASIC? Am I a polyglot?

All the polyglots I’ve ever spoken with, at the Polyglot Gathering or on my Itchy Feet site, maintain a very loose definition of what “speaking a language” means. As a group, polyglots are extremely inclusive. After all, their hobby is learning new languages to gain new cultural perspectives and speak to new groups of people – they’re by definition a very open-minded bunch. Being a “polyglot” is not a rank or mark of status. It just means you enjoy learning new languages. So if you want to call yourself a polyglot or not, that’s fine by the polyglot community. The more the merrier!

What a shame! Here are two perfectly good words that sound completely different, and yet they’re used interchangeably. I think this is a waste, and I want to propose that we language learning enthusiasts popularize a distinction between the two. What distinction? Well, I’m glad you asked! I have just the one (I can’t take credit for it, as I heard it from someone else, but since I can’t remember who that is, we’ll just pretend we are all inventing this right now):

I propose that a polyglot is someone who has actively, consciously learned more than one language, where a multilingual person is someone who grew up speaking more than one language. Get it? So if you grew up in northern Morocco and since childhood speak Moroccan Arabic, French, Spanish and Tamazight, you’re multilingual. If as an adult you then moved to Asia and picked up Chinese, Korean and Thai, you’d also be a polyglot. Obviously, there’s a lot of wiggle room here as well (what if you learned a language in school as a teenager?), but I think the distinction between those that were raised with multiple languages and those that learned them on their own is an important and interesting one. We have two words, let’s use ’em!

What do you think?

P.S. – a “dodecalingual” is apparently someone who speaks twelve languages. They do exist!