Danish Numbers: Out-Frenching the French Posted by Malachi Rempen on Aug 29, 2016 in Uncategorized

If you think French’s “four-twenties-and-thirteen” is a confusing way of saying “ninety-three,” just wait until you see Danish’s terrifying “three-and-fifth-½-times-twenty.” 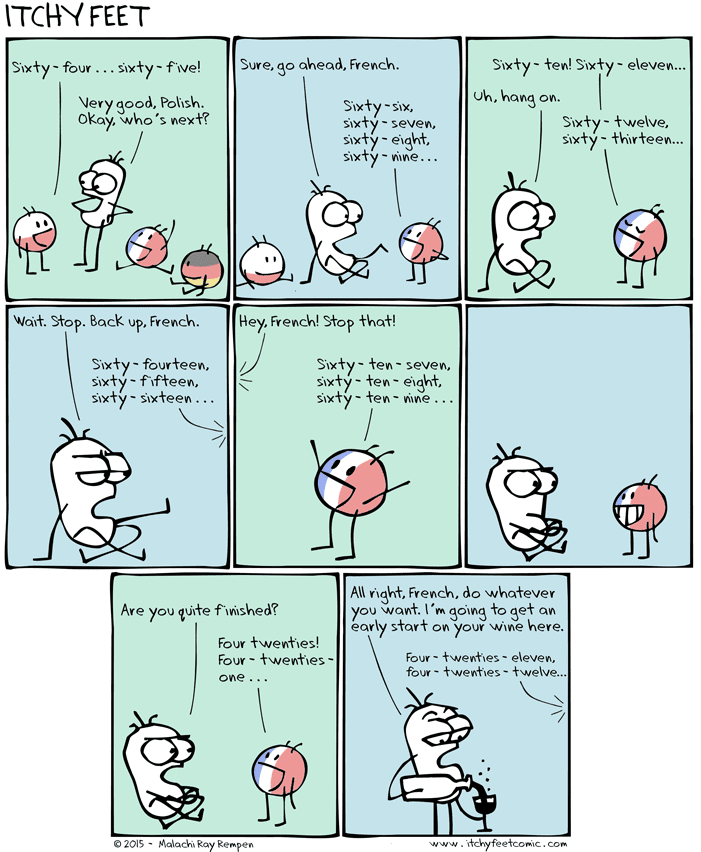 One of my favorite hobbies is complaining about the French system of counting. I’ve done it before, and I’ll do it again. I think perhaps it’s because French numbers are a perfect representation of what my personal experience with French culture is all about: form over function. Quatrevingt-treize is a beautiful, melodious number that rolls off the back of the tongue and delights the ear. It also makes no sense. “Four twenties and thirteen?” Seriously? What’s wrong with “ninety-three”? Yes, the Swiss and the Belgians have it figured out – they say nonante-trois. But when’s the last time you heard anyone wax poetic about Belgian culture?

Just kidding. But seriously, thanks to knowledgable internet commenters, I’ve learned that although one of the more well-known, French is far from the most baffling numerical system.

That award has to go to Danish.

Now, we at Transparent have you covered when it comes to numbers in Danish from 1-20. And that’s a great start, as long as you never have to count much higher than that. But if ever that dark day ever arrives when you need to order or add up or keep track of more than forty-nine of something, may the lord have mercy on your soul. That’s because starting from fifty, Danish numbers enter a hellish Scandinavian maelstrom of linguistic nightmare. Just look at the word for “fiftieth”: halvtredsindstyvende. If that doesn’t make you want to cower at home with the curtains drawn and drown your sorrows in akvavit, I don’t know what will.

Basically, Danish numbers after fifty combine both a base-20 system of counting (unlike the common base-10) and an abbreviation of old-fashioned expressions for fractions. That’s right, fractions: get excited.

So: “fifty” is halvtreds, which is short for halvtredsindstyve. The -indstyve is left off because the Danes appreciate that a day only has so many hours in it to say numbers, but the full halvtredsindstyve literally translates to “half-thrice-times-twenty.”

Well, you see, the “half-thrice” bit actually refers to halvtredje, an old and no-longer-used way of expressing 2½. For some reason I have yet to understand after researching all around the internet, 2½ is somehow the “third ½.” The “first ½” is simply ½. The “second ½” is 1½, and the “third ½,” halvtredje, is 2½. You figure that one out.

If we accept that little peculiarity, we see that 2.5 x 20 = 50. So “the ‘third half’ times twenty” is fifty: halvtredsindstyve, truncated in everyday speech to halvtreds.

Obviously, I’m exaggerating here. Most Danes themselves probably don’t know the internal “logic” (or lack thereof) behind their numbering, and once you learn Danish, I’m sure it’s not a big deal.

Or is it, Danish language learners? You tell me, I’m dying to know!