The Curse of the Englitalianeutsch Posted by Malachi Rempen on Sep 14, 2016 in Uncategorized

When you live in a multicultural context, you start to cultivate curious habits, like speaking a mishmash of languages. And what happens if you raise a kid in that context? 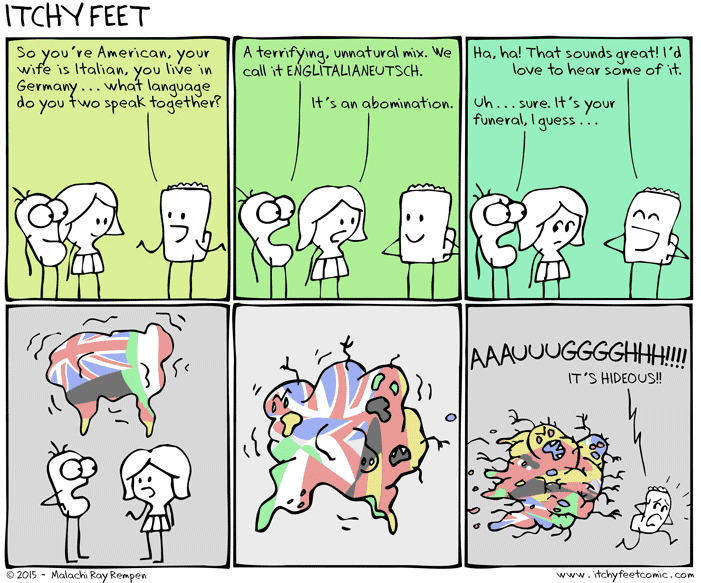 The other day my wife and I were with my mom in an airbnb up somewhere in the middle of nowhere, Germany. My mom is American but speaks perfect German, having studied it in college and later marrying an actual, living German for over twenty years. She’s an even more voracious language learner than I am – she also speaks fluent Spanish and French, and her Italian’s pretty dang good as well. But she’s a proper, do-it-right language learner, and doesn’t like to mix them up. So when I was in the kitchen preparing a salad with my wife and I asked her, “so the formaggio, should I schneid it?” You can imagine the look my mother gave me.

Il formaggio is of course Italian for “cheese,” and schneiden is the German verb to cut (and the Englitalianeutsch was so convoluted I didn’t even conjugate properly – in German you’d say soll ich es schneiden since, as you may know, an infinitive verb follows a conditional clause – so I should have said “should I schneiden it?”).

We’re expecting a son in December, and we wonder about this a lot. What language will be his “mother” tongue? The language his literal mother speaks, Italian? The language of the household, which will probably be English? Or the language of the country where he’ll grow up, German? Or – god forbid – will the accursed Englitalianeutsch be his mother tongue?

What does “mother tongue” mean, anyway – is it the language you’re most comfortable speaking? That could be a lot of things; my German dad, for example, has lived in the USA for so long that he’s more comfortable speaking English than German. Is it the language your mother speaks? I’m sure there are plenty of examples of mothers speaking languages that don’t get passed on to their kids. Or is it more a “cultural” mother tongue, the language you feel you “belong” to? In that case, I’m guessing our son will check all three languages off for that one, if we do our jobs raising him to be familiar with our respective cultures.

But I’m not sure. I just don’t want him to feel like a foreigner in all three languages. Shouldn’t we all have one language that we can comfortably rely on, no matter what?

What’s been your experience? What’s your mother tongue, and is it different than what people might think? Do you raise bi/tri/multi-lingual kids, or were you one yourself? What’s your equivalent of the Englitalianeutsch?