When is a Language “Done”? Posted by Malachi Rempen on May 1, 2017 in Archived Posts

How much of a language do you need to learn before you can “finish” it? Or is that an absurd idea altogether? 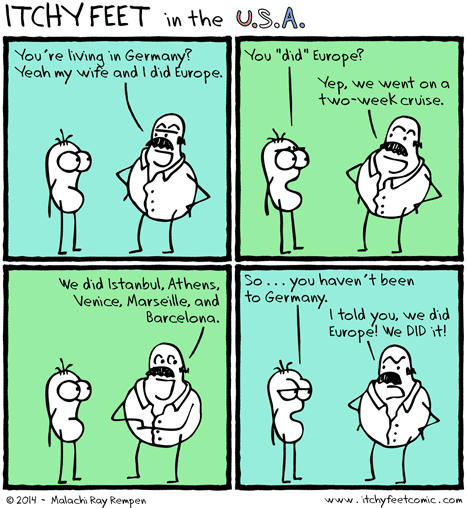 It’s ridiculous, sure, to say that you “did” a country. That somehow implies that a country is one single object, like a roller coaster or a fruity cocktail or a Snuggie. Yes, you went on the France ride, and it was great. You tried out China, and it wasn’t for you. You put on Peru for size, and it was a great fit. As we all know, a country is far more than the sum of its parts, even assuming that its parts could somehow be packaged up and delivered as an identical experience to each and every person. You could personally set foot on every square inch of a country and still it wouldn’t be “done.” You could spend your whole life, from birth to death, in a country and still it wouldn’t be “done.” Even if you could somehow transplant your brain into the heads of everyone living in that country at any given time, you would never have “done” the country.

Travel is an experience, and by definition experiences are unique to each person who has it. Even conjoined twins don’t have the same experience of life – or, presumably, of travel. The other reason you can’t “do” a country is that countries don’t just exist in three dimensions. They’re not just longitude and latitude. They’re also traveling and changing and adapting through time, the fourth dimension. You could retrace your steps on the same hike every year and your experience would probably be vastly different. The value of a country’s “revisitability” lies in its ability to provide you with new experiences, even if you come back to the exact same spot during the exact same time of year with the exact same people.

The same goes for language learning.

There are lots of polyglots out there who can speak a lot of languages fluently. Then there are those who say they can speak a language but might just be conversational. And at the end of the day, who’s to say that doesn’t count? Whether you can “speak” a language is kind of the same as whether you’ve “done” a country. It’s up to you to decide what that metric is, there’s no scientific definition. I myself am conversational in German and Italian, less so in French and Spanish, and I can say exactly one silly phrase each in Hungarian, Greek, Chinese, Hebrew, Russian and Turkish. Does that mean I can “speak” all those languages? Have I “done” them? Or do I have to be fully versed in a language’s history, speak it not just as a local but as an intellectual in that language might, with complete mastery of the various accents and regional variations before I can claim I “speak” it?

It’s nonsense, of course. But what makes people keep coming back to certain languages, like that same hike taken again year after year?

I think it comes down to a language’s “revisitability.” Certain languages provide fresh challenges and new ways of seeing things the more you speak them. That feeling is addictive to anyone who’s learned a new language – that feeling that by speaking or understanding a new language, your brain is literally shifting. It’s understanding the world in a new way. And some languages give you that feeling over and over and over again, in different ways. For me, German is that way. I’m always reminded by the language’s unique grammar structure and word combinations that there’s a different way to define the world around us. It’s thrilling. Spanish, on the other hand, is so familiar that I don’t feel I’m getting that same revisitability.

That’s just me, though – everyone has their own favorite hiking trail. What’s yours?