Advocating for Language—Online and on Capitol Hill! Posted by Transparent Language on Mar 3, 2020 in Company News

A few weeks ago, Lorie Roule, our Senior Executive for Intelligence at Transparent Language, participated in the Joint National Committee for Languages and the National Council for Languages and International Studies (JNCL-NCLIS)-sponsored annual Language Advocacy Day on Capitol Hill.

Language Advocacy Day is a gathering of language educators, researchers, translators, interpreters, business owners, and other language industry leaders who advocate to the Congress for increased support for language programs across the country. 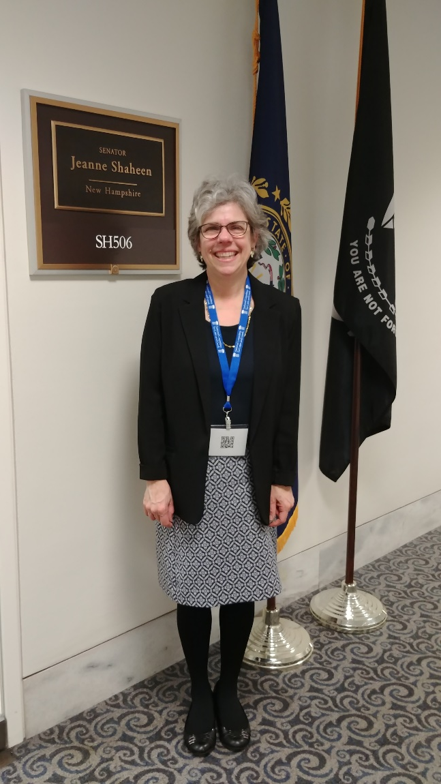 Lorie shared with us a little bit about her experience visiting the Senate offices of New Hampshire (the state in which our company is headquartered) at the 2020 Language Advocacy Day:

“It’s pretty exhilarating to be able to add one’s voice to those of like-minded colleagues to advocate for an important cause.  That’s what happened on February 6, when I spent the day with dozens of fellow language educators, administrators, and industry leaders on Capitol Hill advocating for the importance of foreign language for our nation.  We collectively met with Senate and House offices from nearly every state and Washington, D.C. and Puerto Rico.  The reception was overwhelmingly positive, including from the two offices I personally visited—those of New Hampshire Senators Jeanne Shaheen and Maggie Hassan – the home state of Transparent Language, Inc.  We thanked our representatives for passing the Ester Martinez Native American Languages Programs Reauthorization Act, which, in part, authorizes grant programs for the preservation of Native American Languages.  This bill was passed unanimously by both Houses, which is exciting!  We also asked those who were not already members of the newly formed America’s Languages Caucus to join this bipartisan and hopefully soon-to-be bicameral caucus dedicated to ensuring adequate resources to the study of languages.  The annual Language Advocacy Day, organized by Joint National Committee for Languages and the National Council for Languages and International Studies (JNCL-NCLIS) kicks off a new year advocating for languages and we will all look for other ways to engage with our representatives throughout the year.  All in all, a day well spent in Washington, despite the rainy weather!”

Of course, language advocacy is an ongoing effort, and one we work towards continuously. At Transparent Language, we champion language learning at all levels, working with government language programs, corporate training programs, schools and universities, public libraries, and of course individual learners. We also believe in the value of all languages—it’s the reason you’ll find more than 110 languages available in Transparent Language Online and more than 130 in the CL-150 Platform.

Our belief in non-commercial and underrepresented languages also inspired 7000 Languages, a former department at Transparent Language that has evolved into an independent non-profit organization. The organization works with language advocates and educators to create online language courses for indigenous and endangered languages. We donate our technology, and in return anyone learning with our platforms has access to the courses they create, including Ojibwe, Dakota, Behdini Kurdish, and Balinese.

In an increasingly globalized world, our economy, security, public health, and beyond all depend on our ability to learn, maintain, and use foreign languages. Fortunately, we have good news: this year’s Language Advocacy Day was JNCL-NCIS’s largest turnout, with 46 states, Washington DC, and Puerto Rico represented by 185+ attendees who attended 220+ meetings!

We look forward to more events like this one—and to working with more language programs of all levels and sizes to continue enhancing America’s language capabilities.