Souvenir Hunting in Norway Posted by Bjørn A. Bojesen on Jul 18, 2016 in Holidays 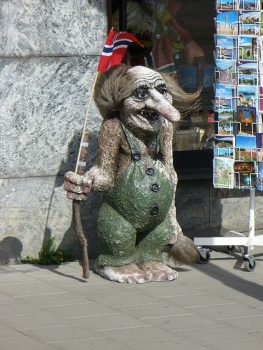 Hei! Hvordan går det? Hopefully, your answer is bra (well)! 🙂 To many people, sommeren ([the] Summer) is a time for reiser (travels). Maybe you even found your way to Norge, to enjoy the land of fjorder og fjell? Here are some suvenirer you may consider bringing home:

• norsk melkesjokolade (Norwegian chocolate). While some people find it too søt (sweet),  I know I’m not the only one who finds Freia milk chocolate really delicious. The good thing: You can get them in big, 200g packages…

• norsk strikkegenser (Norwegian knitted sweater). Norwegian knitwear is famous, as the products are both sturdy and good-looking. A really popular model is the Mariusgenser.

• ostehøvel og brunost (cheese slice and Norwegian brown cheese). In Norway, the caramelly brown cheese is made from myse (whey) from the milk of geiter (goats) as well as kuer (cows). Of course you should bring an ostehøvel – a Norwegian invention – to slice it. 🙂 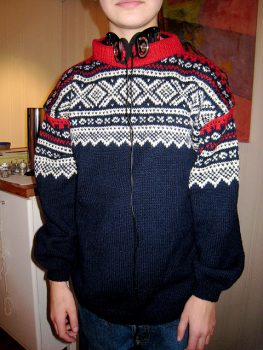 The Marius sweater. (Photo courtesy of Kirsti I. at Flickr, CC License.)

• troll (trolls). Don’t leave the country without a troll or ten! They come in every form imaginable, from figurines to postcards and t-shirts. Fun fact: The guy behind most of the postcards and books is actually a Swede, Rolf Lidberg…

• norsk flagg (Norwegian flag). If you’ve ever been to a 17. mai national day celebration, you know that Norwegians are crazy about their beuatiful flags… Small handheld versions are available – everywhere. 🙂

• an elgskilt [ELGsheelt] (moose warning sign) for your wall. DON’T imitate those tourists that remove the actual signs from the roads! 🙂

• norske bøker, blader og filmer (Norwegian books, magazines and movies). As a devout language-learner, you should of course bring home a couple of cultural gems. Even with streaming taking over, CDs and DVDs are still widely available in stores such as Platekompaniet. 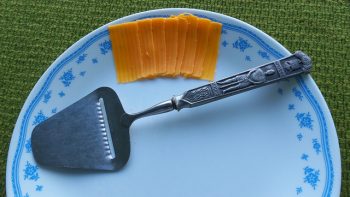 • steiner og mineraler (stones and minerals). The best memories are often free. Do some mountain trekking and you’ll be surprised at all the nice stuff you’ll find.

Have you bought some interesting souvenirs in Norway? Or is anything missing from the list? Please share in the comments section.