Bom dia, amigos leitores! Good morning, dear readers! Já estão recuperados do carnaval? Have you already recovered from the carnival? Well, we are still in the party mood, so in this text from our series on the Brazilian states, it’s time to talk about Pernambuco. Forget about Rio de Janeiro for now, as this state located in the nordeste (northeast) of Brazil has one of the most unique and traditional carnivals, mainly in its capital Recife and in the historic city of Olinda. Curious to learn a little more about Pernambuco? Então abre-alas!

Bordered by the Atlantic Ocean, Pernambuco is slightly maior (larger) in extent than Portugal. You can expect a lot of calor (hot weather) in this state, as its climate is tropical damp in the regions closest to the litoral (coast) and semiarid in the continental part, with lowest temperatures of 24˚C in mid-July, when it is inverno (winter). 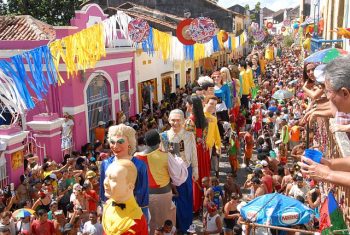 Among the traditional festivals, it is hard to overlook the world’s largest junina party, which takes place in the city of Caruaru. Just over 100 kilometers from the capital Recife, the city of Caruaru celebrates every year with several concerts, forró dancing, pratos típicos (typical dishes), balloons and fogos de artifício (fireworks). This celebration entered the Guinness book as the largest regional ao ar livre (outdoor) country party in the world, welcoming over 1.5 million visitantes (visitors)!

Over the carnival period, what stands out are the Recife and Olinda festivities. As neighboring cities, they form a festive cord from which no folião (reveler) will ever want to leave. The streets brim with blocos (groups), music, bebidas (drinks) and dances. While Recife looks more like a metropolis, Olinda is a historic site founded in 1535 off the Atlantic Ocean coast, so get ready for breathtaking vistas (sights) and architecture, in addition to its famous bonecos gigantes (giant dolls) that desfilam (parade) during the party. And as if that were not enough, what truly draws the most attention in these festivals is the ‘frevo’. 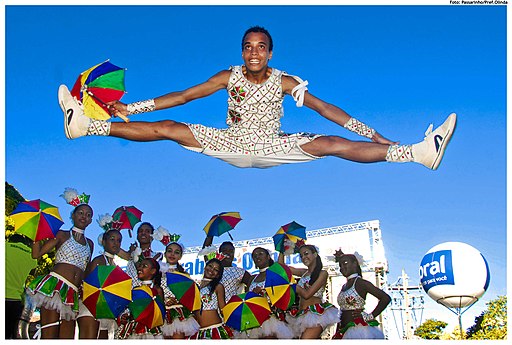 A musical rhythm and traditional dance from Pernambuco that merges different genres and has a strong influence of capoeira, the typical Afro-Brazilian martial art. With dançarinos (dancers) wearing trajes coloridos (colorful costumes) and wielding um guarda-chuva (an umbrella) that resembles um arco-íris (a rainbow), the frevo is declared by UNESCO as Intangible Cultural Heritage of Humanity. The fast pace of the music and dance is so catchy that it is exactly where the name comes from: frevo derives from the word ‘fervo’ (to boil), which means agitation and excitement. And whoever has been to a Brazilian carnival knows that nothing defines it better than this, right?

Have you ever been to Pernambuco and enjoyed any of the festas (parties) we mentioned above? Be sure to let us know in the comment box and tells us about your experiences in this beautiful estado (state). Até a próxima! See you next time!