A Guide to the Internet in China – Online Dating Posted by sasha on Nov 12, 2014 in Uncategorized

It’s been a while since our last post about the Internet in China, so here are links to previous posts in case you missed out and are interested:

For our final post, we’ll look at the wonderful world of online dating in China. How fitting, seeing as how Single’s Day (光棍节 – guāng gùn jié) was just a few days ago.

A Brief History of Dating

Dating, as with just about everything else, is complicated in China. One need only look at China’s history to understand this – being able to select your own mate is something quite new here. For hundreds of years, couples were paired up by village matchmakers, parents, and factory bosses. Things got slightly better when Mao unified the country as the PRC, as he banned arranged marriages and gave women the right to divorce. Dating was still meant to quickly lead to marriage, though, and anything else was deemed “hooliganism” by the Chairman. Fast forward a few decades to the 1980s, and most women were finally truly able to select their partner. Without many social outlets in which to meet other single people, this made the new process of finding love difficult and awkward. For most Chinese, dating in high school is absolutely unheard of. There are no homecoming dances or football games for young people to mingle at. In university, many students finally begin dating in what resembles American middle-school kids awkwardly flirting with each other. Once they enter the workforce, millions of young people flock to big cities. Here, they know no one, have no money, and still have few venues in which to be social and meet people. Add to that the explosion of the Internet in China as well as the use of social media and mobile devices, and it should come as no surprise that online dating is now huge here. 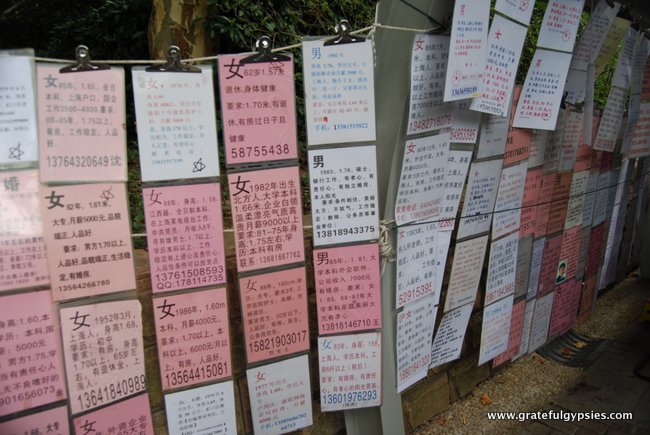 In China today, you can still find “marriage markets” – places where aging parents come to browse hundreds of personal ads, chat with matchmakers, and hopefully find the perfect partner for their child. Simple ads hang on a line listing important factors: height, income, and home ownership are on almost every one. While the old folks may prefer this more traditional method, their children are busy browsing ads of their own – on a computer. The online dating industry is growing at break-neck speed here, with an estimated 2 billion RMB ($318 million) in revenue for the year 2014. Having moved away from their major social network (their hometown or village) to a big city, possessing little social skills from years of nothing but studying, and being incredibly busy trying to make it in the tough world of a metropolis like Beijing or Shanghai, searching for love online seems like a much better option to millions of young Chinese people. There is a conundrum at work here – these young people are expected to pour their time and energy into developing themselves and their career, but at the same time they’re expected to find a suitable mate and get married before too long. For busy professionals trying to focus primarily on work, browsing a few personal ads on their mobile phone seems much more efficient than trying to go out and meet people in their very little free time. Attitudes towards online dating are changing as well. While a mere 5% of people found it acceptable back in 2006, that number is now over 40%.

The king (or should we say queen?) of online dating in China has got to be Jiayuan (世纪佳缘 – shì jì jiā yuán). Started by Gong Haiyan from her dorm room back in 2003, the site now boasts nearly 100 million users and a listing on the Nasdaq. Gong even found her husband on the site, and they’ve been married for ten years. Jiayuan not only helps people find potential mates, but it can also help plan weddings.

Another big name in the online dating business is Zhenai (珍爱 – zhēn’ài – lit. “cherished love”). Originally a free site, it was acquired by investment banker turned online entrepreneur Dr. Song Li in 2005. It has been wildly successful, attracting millions of users and plenty of investors. Popular American site match.com even purchased a 20% share in Zhenai back in 2011.

In the US (and I’m assuming many other Western countries), people enjoy online dating because it allows them to browse from a larger pool of potential mates than say their local watering hole. In China, a country of 1.3 billion, online dating serves exactly the opposite purpose. People want to narrow their search results as much as possible, an easy thing to do on Chinese dating sites thanks to search criteria such as zodiac sign and blood type. Whereas the primary focus of personal ads on American sites such as E-Harmony or Match tend to focus on people’s life stories, interests, dreams, and that sort of thing, Chinese ads are much more practical – hometown, income, and height reign supreme. Many people in the States use online dating sites casually and may go out with quite a few people they find, while in China most people are searching for a husband or wife from day one. In Chinese culture, girls are considered “leftover women” (剩女 – shèng nǚ) if they have not married by 28. As for men, if they are without a car, house, or savings, they are considered “triple without” (三无 – sān wú). It’s harsh out there in the world of Chinese dating, so who can blame people for wanting to do the bulk of it behind a computer screen?

A music video called “No Car, No House” – with English subtitles.