With Euro 2020 being hosted all over Europe, many countries tried to find ways to get some games hosted in their country – including Belgium. The Eurostadion (Eurostadium) was supposed to be Belgium’s point of pride in the European Cup. But yeah, it was supposed to be… What happened, and how did it go from a prestigeproject (prestige project) to a blamage (embarrassment)?

The Plans for a Eurostadion

In Brussel’s quest to become gaststad (host city) of the Euro 2020, many things went wrong. And thanks to a great timeline by HLN, the entire fiasco can be told right from the start. It all started almost 9 years ago, in December 2012. The UEFA decides that the Euro 2020 was to be held in 13 cities all over Europe, to celebrate its 60th anniversary. Immediately, Belgium’s voetbalbond (football association) wanted to get in on the action: “Dit is een realistische opportuniteit om een groot voetbalevenement naar Brussel te halen” (This is a realistic opportunity to bring a large football event to Brussels), said then secretary-general Steven Martens.

And so, the story of the Eurostadion begins. A location is quickly found: Parking C of the Heizel. It is part of the city of Brussels, but on grondgebied (territory) of the city of Grimbergen. So that already complicates things. The plan is to start building in 2016 and finishing in 2019.

With this plan, the city submits their bid to host games at the Euro 2020. And lo and behold, a year later, UEFA officially makes Brussels one of the 13 gaststeden of the Euro 2020.

Over the following years, there is some progress. A bouwheer (builder) is found in the company consortium BAM-Ghelamco. RSC Anderlecht, one of Belgium’s most prestigious clubs, signs up to use the stadium for their club. And the city of Brussels is excited for the new stadion too, so that the old Koning Boudewijnstadion (King Baudouin Stadium) can be torn down.

Of course, there are some disagreements and bumps in the road. Literally. One of the complaints from Grimbergen is that the new stadion would lead to the removal of buurtweg nr 3 (regional road no 3). At first, the bouwheer is given positive signs that the buurtweg can be removed. But then gemeente (municipality) Wemmel dient bezwaar in (lodges in an objection). Then Vilvoorde. And the issue of the buurtweg becomes a real doorn in het oog (“thorn in the eye”). In January 2017, the gemeenteraad (municipal council) of Grimbergen can’t find a meerderheid (majority) for removal of the buurtweg. So we’re already a year later than the initial plan to begin construction.

But can construction even begin? 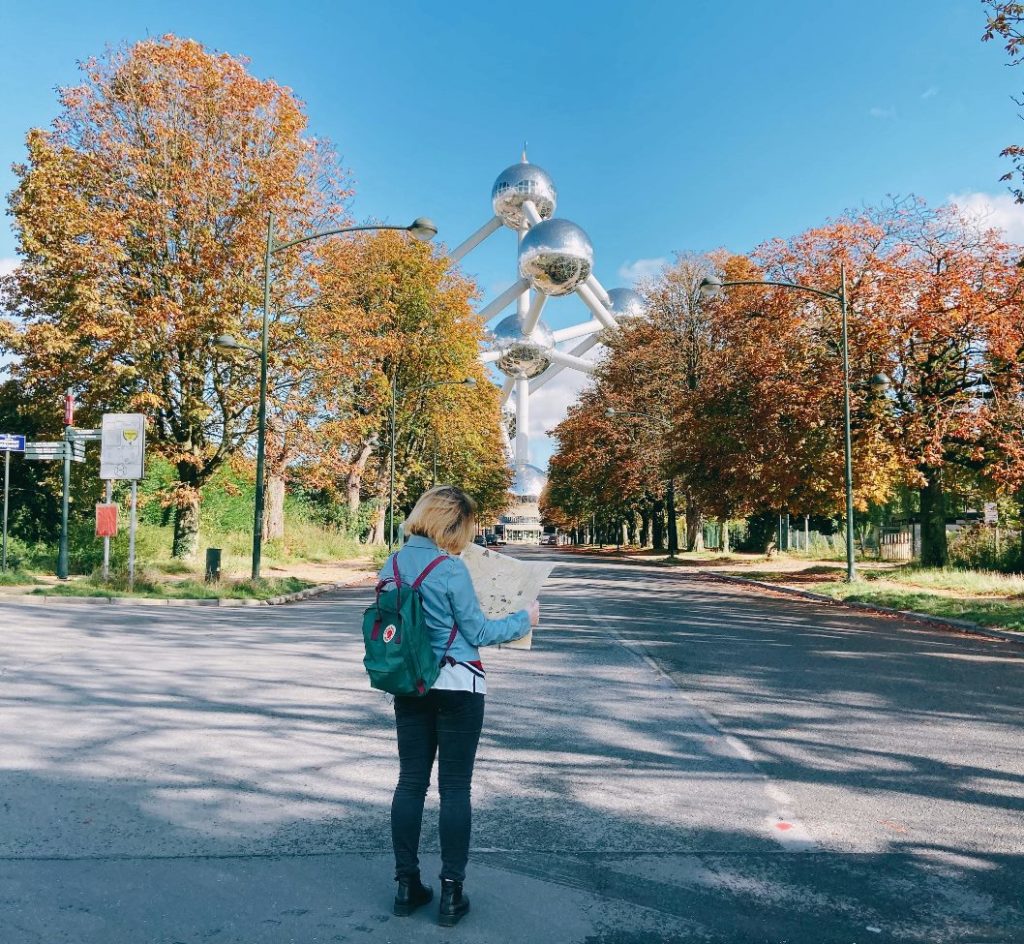 De weg kwijt! The Eurostadion was to be built close to the Atomium in Brussels (Photo by Tamar Gogua on Unsplash)

The dilemma with the buurtweg in turn led denial of a vergunning (permit) to build the stadion at all. The milieuvergunningsaanvraag (environmental permit application) is denied.

RSC Anderlecht steps out of the project, because it is not happy with the plans of bouwheer Ghelamco. In March, Ben Weyts, the Vlaams minister van Openbare Werken en Mobiliteit (Flemish minister of Public Works and Mobility) refuses to sell the gronden (areas) where the stadion is to be built. He says there is little left of the original plans.

And yet, on March 31, 2017, UEFA bevestigt nogmaals (reaffirms) their vertrouwen (confidence) in Brussels and the Eurostadion. However, the battle over vergunningen keeps going. Ghelamco gaat in beroep (appeals) against the besluit (decision) to deny the vergunningen, and hands in new ones. In September of the same year, UEFA tells Brussels that they have until November before they will look for replacements that can host the toernooi (tournament). On December 7, it will decides whether to keep Brussels or not.

Even though it is vijf voor twaalf (“five before twelve”), nothing really happens, except more negatieve adviezen (negative opinions) from overheidsinstanties (government institutions). The vergunningen don’t come. And on December 7, the decision comes in from UEFA: Brussels is out. The Eurostadion is dead. A real blamage!

The games that were meant to be played in Brussels were assigned to the Wembley Stadium in London.

Some say this whole blamage was simply caused by the difficult political situation in Belgium. After all, Brussels, a mostly Wallonian city, wanted to build their stadion on grondgebied of a Flemish gemeente, Grimbergen. But perhaps it is not that easy. Many parties were involved in this project, and different obstacles came up, not just political ones. And sometimes, big projects like this simply go down this road, just like the BER Airport in Berlin!