Guten Tag! I’m bringing you this post today in light of a special day tomorrow, October 6th 2016. Tomorrow is German-American Day in the USA! This is a day to celebrate the German heritage in America. Specifically, it commemorates the date in 1683 when 13 German families settled in Philadelphia and subsequently founded Germantown, Pennsylvania.

German-American Day is now a yearly celebration of the German heritage in America. It was originally celebrated in the 19th century, died out for a while during World War I (unsurprisingly due to the anti-German attitude of the time), and then was revived in 1983 to mark the 300th anniversary of German immigration to the USA.

German-American Day is now a public holiday in the USA. Various celebrations for it are organised by the German-American Heritage Foundation of the USA.

In German, it is called Deutsch-Amerikanischer Tag.

You might be surprised to hear it, but there is a rich German heritage in both north and south America. In fact, there are approx. 50 million German Americans in the United States alone.

Some other examples of German culture in the USA include:

Von Steuben Day is a celebration for German immigrant Baron Friedrich von Steuben, who came to the USA in the 18th century to offer his services to George Washington. Von Steuben Day is traditionally celebrated in September in various cities across the USA, the biggest one being the German-American Steuben Parade, held in New York City. Amongst other things, it features marching bands playing traditional German music. 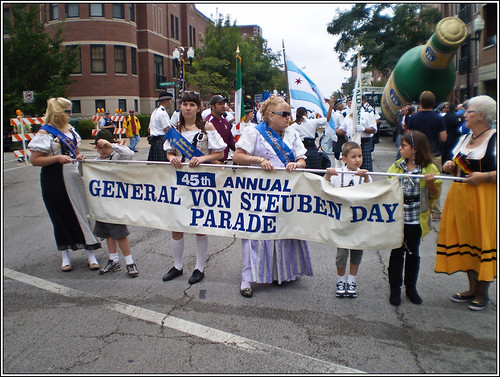 People dressed in German clothing for the Von Steuben Day Parade in USA. Photo by gas_station_sushi on flickr.com under a CC license (CC BY-ND 2.0)

If you find this topic interesting, I’d love to cover it some more by looking in closer detail at some of the towns and cities from around the world with German heritage. 🙂

But for now, wherever you are, enjoy Deutsch-Amerikanischer Tag!