Germany almost has a new chancellor. But who is Olaf Scholz? Posted by Sten on Nov 25, 2021 in Language, News, Politics

Last month, I wrote about the Ampel (traffic light) that was likely coming to Germany. This isn’t an actual traffic light, but rather a coalition of three political parties: the SPD, Greens and FDP. They now concluded their coalition talks and presented their coalition – including a new Bundeskanzler (m, federal chancellor) – Angela Merkel‘s successor. After 16 years, Germany is seeing a change at the helm of government. All that’s left now is for the coalition parties and parliament to confirm this new coalition. So it’s time to look at Olaf Scholz and ask: Who is this guy, and what will he mean for Germany? 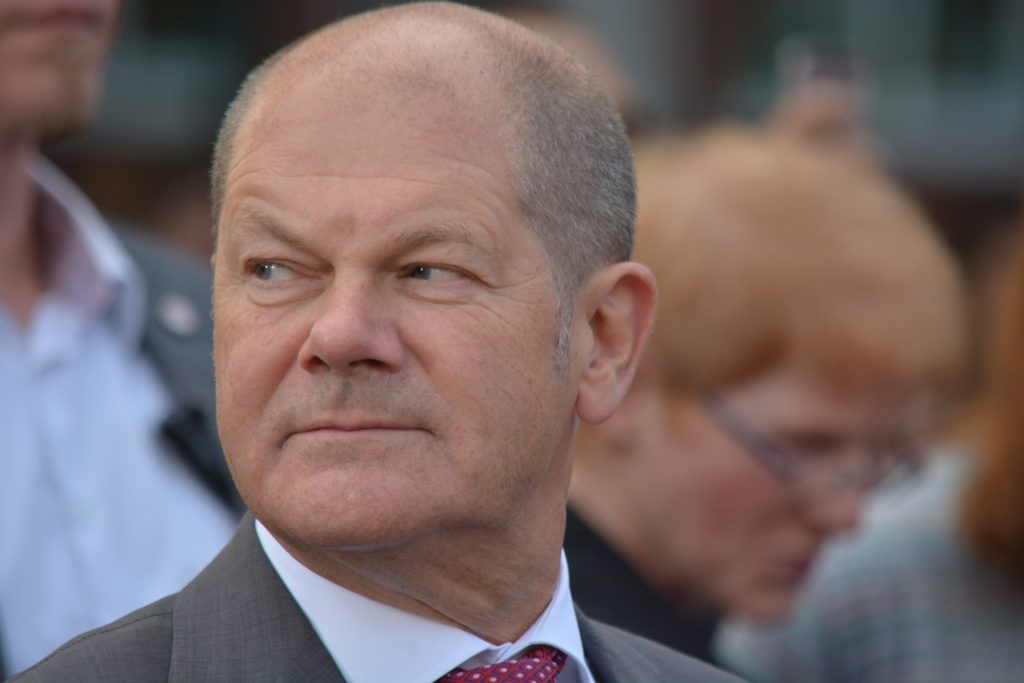 Image by fsHH at Pixabay.com

Born on June 14, 1958 in Osnabrück, Scholz moved to Hamburg as a child, and that’s where he grew up. His parents worked in the Textilbranche (textile industry). After finishing high school, he continued with legal studies and went on to become a Partner (partner) in die Anwaltskanzlei (law firm). While he was getauft (baptized), he later left the evangelical church.

His political career starts in 1975, when he joins the youth organization of the SPD, the Junge Sozialisten or Jusos (Young Socialists). In his time, he visited socialist East Germany on multiple occasions, meeting with the SED, the party governing the GDR.

Since 1994, Scholz has held a number of politische Ämter (n, political offices). From Kreisvorsitzender (district chairman) to Parteivorsitzender (party chairman) of the SPD, he’s done a lot in those 25 years. From 2007 to 2009, he served as Bundesminister für Arbeit und Soziales (Federal Minister of Labor and Social Affairs). He then moved on to become Erster Bürgermeister (First Mayor) of Hamburg from 2011 to 2018, only to return to the federal stage in 2018 as the Bundesfinanzminister (Federal Finance Minister, Secretary of the Treasury).

So he’s been a politician for more than two decades now, with experience in a variety of public Ämter. In 2020, he was elected by his party as the Kanzlerkandidat for the 2021 elections. And that was a good move – after disappointing election results in the past, the SPD became the biggest party, paving the way to the Kanzleramt (Office of the Chancellery) for Olaf Scholz.

What is Scholz known for?

Scholz made a good showing in the run up to the election mostly because he stayed under the radar. While the other candidates had multiple scandals they had to deal with, Scholz managed to not attract much negative attention. Whenever he gives speeches or answers, he tends to give a matter-of-fact answer, a refined political balance that doesn’t allow many attacks – a behavior that has given him der Spitzname (nickname) “Scholzomat” (m, Scholzomaton). Like a robot, Scholz can throw out these refined answers! No wonder after two dozen years of political experience, where every word can get you in a world of trouble.

Beyond that, he is known for being involved in a scandal with Cum-Ex-Geschäfte (cum-ex trades) while he was Bürgermeister in Hamburg. His finance ministry did not require the Warburg Bank, based in Hamburg, to pay back money it obtained through such Cum-Ex-Geschäfte. Scholz allegedly met with the head of the Warburg Bank in those times, raising suspicions that this was a deal between him and the bank.

Another scandal is the Wirecard story, a massive German banking company that turned out to be massively fraudulent. The German financial authority missed important clues to investigate the company. And since the authority works under the Finanzamt (n, ministry of finance), Scholz was implicated.

On a positive note, he is known also for pushing for the massive Finanzhilfen (financial aids) during the COVID-19 crisis. Furthermore, Scholz managed to convince US president Biden of the worldwide Mindestbesteuerung (minimum taxation) of at least 15 percent of multinational corporations. The G7 then agreed on this Mindestbesteuerung as a whole.

For the new government, Scholz wants to push for more social policies as well as the legalization of Marihuana. Environmental policies should also be more in the foreground.