I hope you’re all having a lovely Wochenende so far. Today’s topic is the ever-evolving German language. A few months ago I did a couple of blog posts on the phenomenon that is Denglisch (or ‘Denglish’, if you’re spelling it the English way). What is Denglisch, I hear you ask? It is the hybrid language of German and English that is spoken in Germany, especially by the German youth. Denglisch exists in various different forms. So you can see what I mean, here are all of the existing posts on Denglisch on this blog so far:

Denglisch on Social Media and Websites

One of the comments I received on one of these posts was that it is really interesting to learn new German words that you wouldn’t necessarily hear unless you spoke to young people in Germany. I think this is a very good point. Just like English, German is constantly evolving, with new words being added to it all the time.

I recalled this comment when I read an article on the newest addition to the German language: merkeln.

Merkeln is a verb which could be translated to ‘to merkel’ in English. And if you hadn’t guessed already, it is inspired by the one and only German chancellor Angela Merkel! 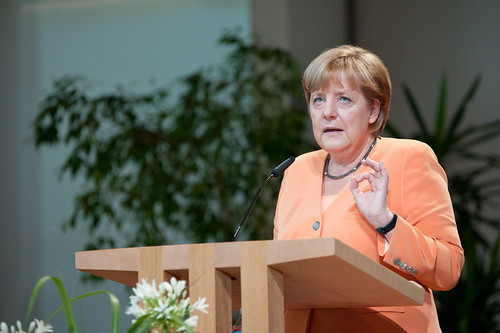 The Langenscheidt dictionary (who name the Jugendwort des Jahres, or the Youth Word of The Year each year) defines the verb merkeln as follows:

Merkeln: Nichts tun, keine Entscheidungen treffen, keine Äußerungen von sich geben, Bezug auf Angela Merkel.
Merkeln: To do nothing, not making any decisions, not give any opinions on anything. With reference to Angela Merkel.

What does this have to do with Angela Merkel?

Angela Merkel has been heavily criticised for taking her time to make decisions about important political issues, including the Greek crisis, and ‘reacting’ to events rather than following any specific ideology. Although it has negative connotations, the fact that this word exists amongst young people in Germany is testament to Merkel’s power, and provides positive reassurance that young Germans are conscious of the country’s politics.

So, just for fun, I thought I’d conjugate the verb merkeln in the present tense, to show you how it might be used. 🙂

Merkeln: to dither or do nothing

Currently, the word merkeln looks to win the title of the Jugendwort des Jahres 2015. But there are many more in the running. You can vote for your favourite online, and the deadline for voting is 31st October. The top 10 words will be revealed in mid-November.

Do you think it would be a worthy winner?

Leave me a comment with your thoughts – and don’t merkel over it! 😉