When to Say ‘Pádraig,’ When to Say ‘Phádraig,’ and When to say ‘Saxifraga spathularis’ Posted by róislín on Mar 11, 2014 in Irish Language 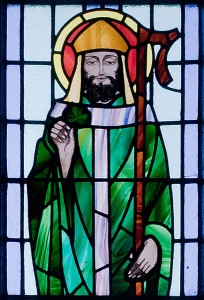 With Lá Fhéile Pádraig just around the corner, let’s take a closer look at the name “Pádraig” itself.  It has two main forms, “Pádraig” being the basic form, and “Phádraig,” used in certain types of phrases.  Less frequently, we may also encounter “bPádraig.”  Of course, there are also nicknames, like Páidín, Páid, Padhra, Pat, Paudeen, and Paddy (but not ‘Patty’!).  And there are also some variant spellings, like “Pádhraig,” “Pádhraic,” and “Pádraic.”

Whether to say ‘Pádraig‘ or ‘Phádraig‘ depends on the phrase involved.  Here are some sample sentences (translations below, so new learners get a bit of a work-out):

Phádraig: And now some examples with the “Phádraig” form:

bPádraig: And now the occasional use of “bPádraig,” most typically used in certain sentences that say what kind of person Pádraig is/was:

In those last two cases, áfach, I think one would be more likely to say, “Tá péist ribíneach i bputóga Phádraig,” or “Tá boiteog i gcraiceann Phádraig.”  In either case, I’d add, “Feo!”

The first group has “Pádraig” as the subject, object, or object of certain prepositions.  The second group, showing lenition (séimhiú), includes direct address (Hello, Patrick!), possession (the coat of Patrick), and certain prepositional phrases (here, ‘on Patrick’ and ‘to Patrick’).  The third group, with eclipsis (urú) means “in Patrick,” here used with the idiom where “i” links two nouns (as in the pattern “Fear atá i Sean Connery ach bean atá i Sean Colvin).  I should add “an t-amhránaí,” in case there are any fir reading this who are also named Sean Colvin.

And how about with the name “St. Patrick”?  Well, for starters, in the phrase “Lá Fhéile Pádraig,” his name is generally left as is, not lenited (to “Phádraig“, which would normally be used for “Patrick’s”).  I’ve always been told that this is a sign of special respect.  If we were talking about an ordinary boy named Patrick, we’d say “breithlá Phádraig” (no”féile” possible since our hypothetical ordinary Patrick isn’t a saint).  Other usages of “Pádraig” the saint, though, often do show lenition (séimhiú), as in “Cruach Phádraig” (Croagh Patrick) and “Purgadóir Phádraig” (St. Patrick’s Purgatory).  But there are exceptions, such as the various schools named “Scoil Pádraig Naofa.” 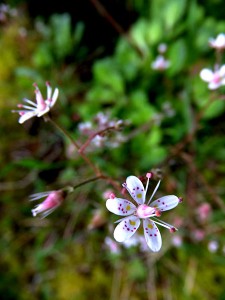 As for “Saxifraga spathularis,” it’s the Latin name for a plant called ‘St. Patrick’s Cabbage.”  But lo, and behold, the Irish name for this plant isn’t based on the name ‘Patrick’ at all.  It’s “cabáiste an mhadra rua.”  And lo (faoi dhó) agus behold (faoi dhó), this plant has (at least) two other names in English, “London Pride” and “fox cabbage.”  The latter is not surprising, since “madra rua” means “fox,” or more literally “coppery red-furred dog” (that “coppery” bit is so you don’t think we’re talking “Clifford red”).  A literal translation as “red dog” could lead us merrily up a garden path where we might end up among the dog roses, dog fennel, dog bane, or dogwoods. So we’ll stop with “fox cabbage,” and with me brushing up on my Noel Coward and Mary Elizabeth Braddon.  Erm, why Noel Coward?  1941 — “London Pride” is a flower that’s free.”  Why Mary Elizabeth Braddon?  Her 1896 novel, London Pride.  And why don’t we have a song or novel called “Fox Cabbage.”  Maybe that title just doesn’t have that special panache!

And actually, these plant names, as with other plant name in other blogs in this series, create a complex web of species, sub-species, and vernacular terms, but I’ll simply accept that “London Pride” is another name for “St. Patrick’s Cabbage,” at least for present purposes.  I wonder if it’s edible, but the accounts I’ve found of it online give no indication of edibility.

Speaking of edibility, and always harboring in the back of my mind a recollection of Leopold Bloom’s breakfast in Joyce’s Ulysses, I was struck by the name of another member of the Saxifraga genus, the “Kidney Saxifrage,” with “Saxifraga hirsuta” as its Latin moniker (“hirsuta” – hairy, wow!).  Hmm, curiouser and curiouser but no evidence that “Kidney Saxifrage” is edible either.  All the more “curiouser” when one considers that “saxifrage” itself means “rock-breaker.”  Useful for kidney stones, I wonder?  Actually I doubt it.  I believe the plant grows a lot on stone walls and finds cracks and crevices in which to root, ultimately, perhaps, compromising the stone walls’ durability.  In Irish, this one is “mórán giobach,” lit. “shaggy saxifrage,” with no reference to kidneys.  Most types of saxifrage are referred to in Irish as “mórán,” which appears to have no relationship to the more well known word “mórán” meaning “much” or “many.”

A little online research tells me that Pliny the Elder believed that Kidney Saxifrage could cure gallstones (why not kidney stones?).  So I guess I’m jumping into the saxifrage applications game about 2000 years after the fact, but, bhuel, “Is fearr déanach ná riamh.”  And even if we can’t consume “St. Patrick’s Cabbage,” with the “mairteoil shaillte,” at least in the US, it adds a new dimension to St. Patrick-related vocabulary.  Bain sult as an bhféile – Róislín

b) Phádraig: “Dia dhuit, a Phádraig!”, “Hello, Patrick!”; Seo cóta Phádraig.  This is Patrick’s coat; Tá caipín ar Phádraig. Patrick is wearing a cap, lit. there is a cap on Patrick; Tabhair do Phádraig é. Give it to Patrick.