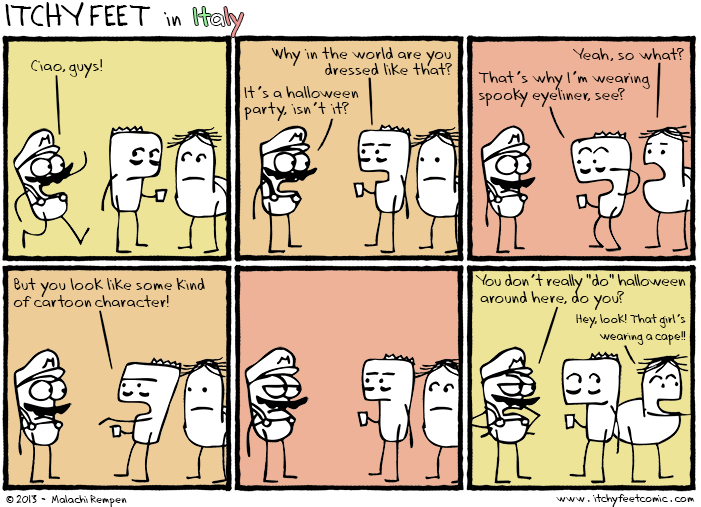 It’s that time of year – the days are shorter, the evenings are chillier, and the leaves are dying in droves of yellow and brown, their shriveled, bone-dry corpses falling unceremoniously to the ground where they will wither and decay, shattering into a gory, crunchy mess under the feet of children everywhere. Yes, it’s a ghoulish time. If you’re in the USA, it’s time to start thinking about what wacky costume you’ll be wearing to the staff party this year. For the rest of the world, it’s time again to wonder what the big deal is with this whole halloween thing anyway (see: comic above) and bemoan the global advance of yet another over-commercialized American holiday.

But it’s also time to get scared.

Fans of the dark, the macabre and the downright spooky are rubbing their skeletony hands in anticipation of this year’s bout of scary stories. Well, I for one won’t deprive you of the joys of this season of horror – allow me to switch on the flashlight under my chin, bare my fangs, and regale you with the three things that terrify me most about language learning. BOO!

Ah yes, public embarrassment. If you haven’t noticed, I’ve written about this particular fear of mine quite a few times already, which should tip you off that it still haunts me to this day. Now, speaking in public is scary even when armed with your comfortable native language, but when forced to walk the creaking floors of conversation with a stranger with only your learned language to comfort you, you suddenly feel the hair raise on the back of your neck.

Why, only recently I found myself at a book signing put on at a local Italian bookstore, and as the author explained his ideas to the crowd gathered there, I realized with cold dread that I had a question. I knew I could not just keep silent, for this was an opportunity to practice my Italian, yet here was a large group of people who natively spoke this language, and did not yet know that I did not. By speaking up, I would reveal myself to them, an imposter in their midst. Who knows what terrifying turns the evening would take from there? Would they point? Would they laugh? Would they feast upon my flesh? The horror!

As it turned out, it went just fine. But perhaps next time I’ll be devoured alive!!

I sometimes feel my brain has the storage capability of a rusty, haunted old sieve. Perhaps it was owned previously by a brainless zombie robot, or perhaps it was forged by the hand of some absent-minded skeleton werewolf, but it sure doesn’t seem to want to keep much that it learns, and that’s a truly terrifying prospect. All that time, all that work, all that energy put into learning something, and it just falls out of my head like the brain matter of some sort of undead ghoul? Auuuuughhhhh!

Over the summer I spent a few days with my wife in Bordeaux, a ghostly land of spookily fine wine and blood-chillingly tasty cheese, where we spoke with the suspiciously friendly locals in their voluptuous tongue. It had been some time since we had opened the rusted gates of the tomb-like wing in our brains titled “French”, and so our attempts at civilized conversation were more a gruesome display of villainous butchery. We dismembered sentences, disemboweled pronunciation and decapitated figures of speech, leaving a grisly trail of linguistic viscera behind us.

After a while, like riding a bicycle, it all started to come back to us, and in fact we realized we hadn’t lost that much at all. But I assure you, for a while there our “French” better resembled serpentine incantations from HELL!

Look at a table of German declensions. You’ve been warned.

What about you? What scares you most about language learning?