Americans Speaking to Americans in French Posted by Malachi Rempen on Aug 15, 2016 in Archived Posts

What happens when you’re in a foreign country, trying out the language you’re learning, and you discover that the person you’re talking to is from the same country you are? Do you keep speaking the language, together but probably incorrectly? Or do you bashfully lapse into your native tongue? 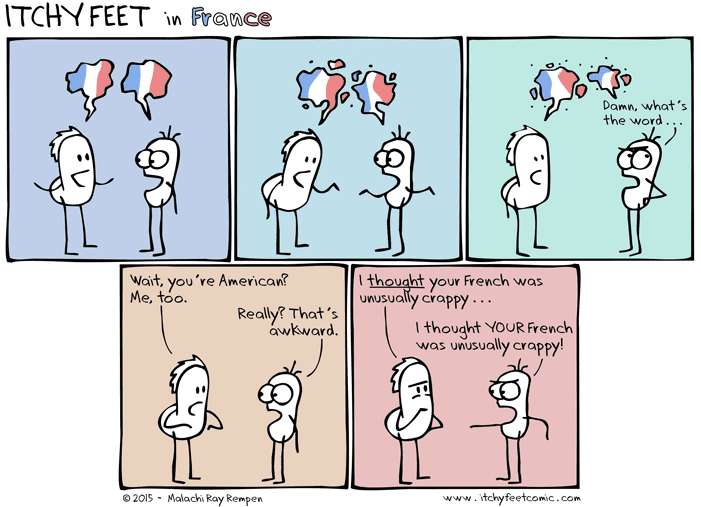 I have a pet peeve. I hate when you’re watching a film or television program and two people speak English to each other, but only for the benefit of the audience. For instance, I literally had to stop watching The Man in the High Castle after the Japanese guys spoke to each other in English – even when they were just by themselves! Why wouldn’t they just speak Japanese to each other?! It’s just lazy writing. They couldn’t be bothered to translate it. It takes me completely out of the story – because usually, when two native speakers meet in a foreign country, they switch to their shared native tongue. They don’t just speak the local language for the benefit of a non-existent “audience.”

But ironically, as much as I dislike this trope on the big screen, I try to follow it in real life.

My French is fairly mediocre, which is why I know I’ve got a lot of practicing to do. So if I’m in France, having a chat, and I discover that the person I’m speaking to is also an American, I’m going to die a little inside. Chances are, we’ll switch to English, particularly if we’re both struggling with French. After all, language is like water: always looking to be level. In a group setting, we try to find the language that’s easiest for everyone to speak – that’s the point of learning a language, isn’t it? To communicate as fluidly as possible. But sometimes that means reverting back to your native tongue.

So why does that bother me so much? It shouldn’t be a big deal. Another American probably isn’t my ideal language partner anyway, right? Better to learn straight from an actual Frenchperson, right?

Actually, no. As I’ve said before, I believe learning from other language learners is the best, especially when you’re still at a lower-intermediate level. If the learner is better than you, they’ll be able to correct you and answer any questions. Native speakers often feel awkward pointing out mistakes and usually have no idea how to teach the peculiarities of their language to you. And if you’re better than the learner, you can do the same for them, which is great – teaching is the best way to learn anything.

And yet, as much as I would like, and as much as I try, I almost always fall back to English in these situations. The fact is, I’m just happy I don’t have to struggle to communicate, for once!

What’s been your experience? Do you fall back to your native language with your fellow countryfolk, or do you insist on keeping up practice?