Tis the season! Every year as the holiday season draws nearer and our social media feed fill with traditions and lore from antiquity – I am sure that you all see Winter Solstice or Saturnalia meme or posts pop up. Over the years, I have done posts on these topics. I have also done Christmasy types of posts such as the Grinch who Stole Christmas in Latin or Christmas Carols in Latin.

However, this year I wanted to do something a little different. Sometimes during Christmas, my family would watch Monty Python’s The Life of Brian.

The Monty Python is a British surreal comedy group that created the sketch comedy television show Monty Python’s Flying Circus, which first aired on the BBC in 1969. The Python fandom developed from the television series into something larger in the scope of influence, including touring stage shows, films (The Meaning of Life, The Life of Brian, Monty Python and the Holy Grail), albums, books, and musicals (Spamalot!).

The Life of Brian

Monty Python’s Life of Brian sometimes referred to as Life of Brian, is a 1979 comedy film starring and written by the group Monty Python. The film tells the story of Brian Cohen, a young Jewish-Roman man who is born on the same day as and next door to Jesus, and is subsequently mistaken for the Messiah through his life and the film.

It has received a 95% “Certified Fresh” rating on Rotten Tomatoes with the consensus, “One of the more cutting-edge films of the 1970s, this religious farce from the classic comedy troupe is as poignant as it is funny and satirical.”

However, during the time it was not popular with everyone. The film’s themes of religious satire were very controversial, drawing accusations of blasphemy and protests from some religious groups. Supposedly, thirty-nine local authorities in the United Kingdom either imposed an outright ban or imposed an X (18 years) certificate. 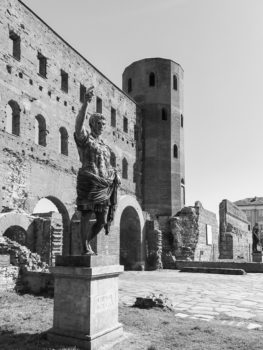 Photo by antonio filigno on Unsplash

I would recommend watching the 4-minute scene and then we can get to the business of breaking down what is happening in this very humorous Latin teacher vs. student type of scene.

Romanes is not a word. The ending looks like that of a 3rd declension ending, but Romanus is the nominative and Romani (2nd declension) is the plural form of this adjective being used as a noun.

So eunt is3rd person plural present indicative (as Brian says) – meaning “they go.” However, commands are given in Latin by using the imperative mood.

Thus, we are looking for ite!

The last word is domus which is the nominative singular form (use when the subject of the sentence) and does not comply with the idea that sentence is giving this place a “motion towards.” So Brian needs a different inflected form. However, domus is a difficult noun as it can be a 2nd or 4th declension depending on the meaning. The dative case is often used for the idea of “to/for” something which Brian offers as a solution and you see how the Centurion reacts. The dative case would be used more like an indirect object such as giving something to the house or home.  Then we have the answer that it is the accusative case for “motion towards”

Brian offers the answer ad domum which is not proper Latin. Domum takes the locative. Just like we say in English “I go home” instead of “I go to the home.” Home is a locative where we don’t always use a preposition or even an article. This is true in Latin as well.

is the correct sentence.

This scene is so funny to many people I think because it reminds us of our loving and yet humiliating Latin teachers of yore. We have all been there Brian. It gets better.