In previous months, we have already explored a large part of the geschützte Schönheit (protected beauty) of German nature. We went to the windige Küsten (windy shores) of the Wattenmeer, the eindrucksvolle Felsen (impressive rocks) of the Sächsische Schweiz, the Jahrhunderte alten Wälder  (centuries old forests) of the Bayerischer Wald, the Erzminen (ore mines) in the Harz, the Tiger (tigers) roaming around in the Eifel, the Tausend Seen (thousand lakes) of Müritz, the hohe Gebirge (high mountain ranges) of Berchtesgaden, and the atemberaubende Natur (stunning nature) of the Schwarzwald.

Today, we will discuss another wonderful park, with its own beautiful features – Nationalpark Jasmund, in the north east, right at the Ostsee (Baltic Sea).

The Nationalpark was established on September 12, 1990. It is the smallest German national park, with only 3003 hectares (ca. 7400 acres), and is located on the Halbinsel (peninsula) Jasmund on the Insel (island) Rügen.

In the 19th and in the first half of the 20th century, huge Findlinge (boulders) were removed to expand docks. This allowed the Ostsee to crash into the Kreidefelsen (chalk cliffs) with full force, as the Findlinge could not break the waves anymore. With every storm, even today, the Kreidefelsen are reduced, because the water always tears some of the Kreide (chalk) into the sea. This also means that the landmass of the Nationalpark is shrinking every time…

What is special about the Nationalpark Jasmund?

The obvious specialty of Nationalpark Jasmund are the Kreidefelsen (Chalk Rocks). The most impressive is the Königsstuhl (King’s Chair), with an height of 118 m (ca. 360 ft)! As I said above, through storms these Kreidefelsen are eroded bit by bit, and that is a shame for such a rare sight. A good example of this are the Wissower Klinken, which were washed away a lot in a storm in 2005.

Before the storm in 2004 (Image by Lapplaender at Commons.wikimedia.org under license CC BY SA 3.0 de) 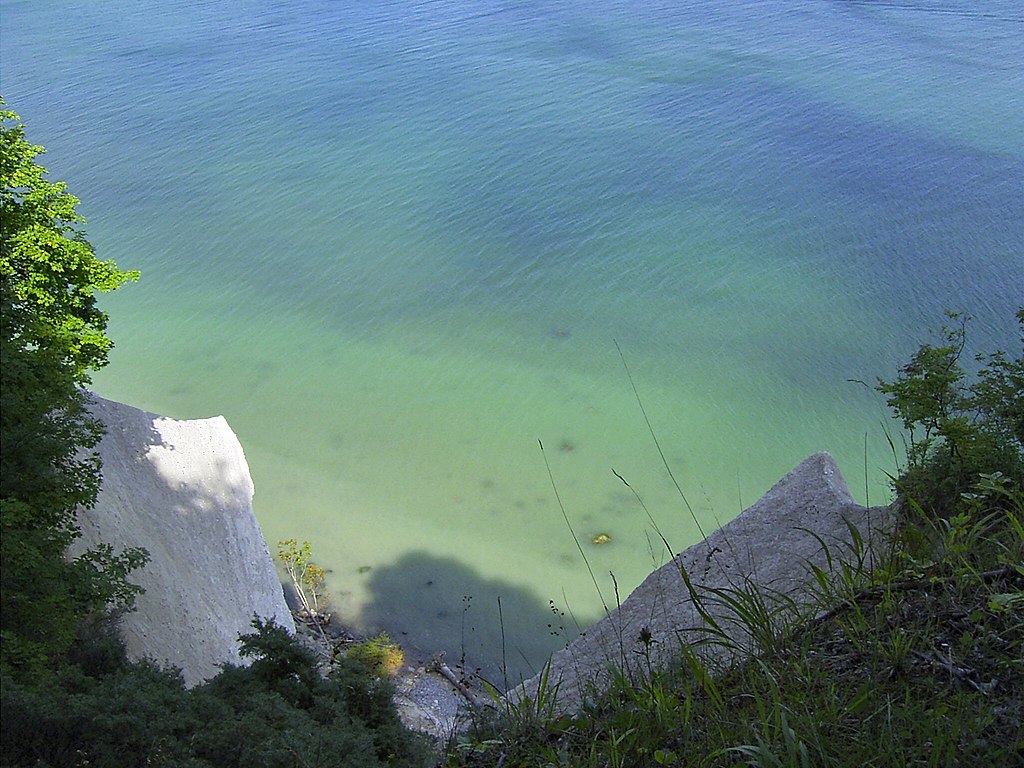 After the storm in 2005 (Image by Lapplaender at Commons.wikimedia.org under license CC BY SA 3.0 de)

Another important feature of the forest is the old Buchenwald (beech forest), which is one of the few protected ones in Germany.

The Beech Forest on Rügen we’re hiking through today is very extraordinary. Unique, even. That’s why it enjoys special protection, and that’s why the United Nations have declared it as World Heritage.

If you want to the whole movie (with English subtitles!) click here!

So, the Buchenwald is even on the list of World Heritage sites!

What else is special? Sein Name (Its name)! The park is called Jasmund, after the peninsula it is located on. It is one of the most unknown parks of Germany, even though it attracts more than a million visitors every year! How is this possible? The Nationalparkverwaltung (national park administration) does not have a lot of money for advertising to tourists. And the Touristikbranche (tourist industry) mostly advertises with Kreidefelsen and Königsstuhl, the main attractions of the park. The main task of the park is to make sure that all these Besucher (visitors) do not destroy the nature it is supposed to protect!

I will leave you with a wonderful video of the park, that highlights all of its beauty!