From ‘Multilingual Madness’ to the ‘Siege Perilous’ via a Discussion of ‘Ord na bhFocal’ in Irish Posted by róislín on Apr 14, 2014 in Irish Language

Lately we’ve looked at the possibilities for saying “multilingual” and “madness” in Irish (ilteangach, buile, among other choices).  The next question is how do we put the two words together.   We’ll follow the typical word order in Irish, first noun, then adjective.   This is the reverse of the normal word order in English (“big boy”), although English has a few exceptions, with the adjective second, like “Attorney General” and “knight-errant,” and for that matter, though well off the beaten track, “the Siege Perilous.”

First, let’s wrap up the phrase “multilingual madness.”  It seems that “buile ilteangach” is the best choice.  None of the other combinations I looked at offered the mellifluous “m-ishness” (is that a word?) of the alliterative “multilingual madness,” but c’est la vie, or as one might say in Irish, “Sin mar atá an saol.”

This year’s winner of the Transparent Language “Multilingual Madness” challenge was Italian (Iodáilis) although Irish put in a good showing (Go raibh maith agaibh!).  No “silíní searbha” here and kudos to “an buaiteoir.”  As a tribute, in an upcoming blog we’ll work on words pertaining to Italian and/or Roman culture.  An Colasaem?   Na Gardaí Eilvéiseacha?  And the foolproof “pasta.”  But is “pasta” in Irish masculine or feminine — there’s always that question with nouns imported from another language.  And I see from a couple of foclóirí Iodáilise that the Italian word “pasta” is grammatically feminine.  So does that have any bearing on its “inscne” in Irish?  Well, that’s the cliffhanger for now.  Imagine, “inscne ghramadúil” as a cliffhanger!

Getting back to the question of word order, let’s look at a few situations in Irish where the adjective doesn’t follow the noun.  And for good measure, we’ll also check out those phrases cited above as exceptions in English: Attorney General, knight-errant, and Siege Perilous.

As noted above, the usual pattern for noun phrases in Irish is “noun-adjective,” as in “bád mór,” “bean ard,” and “léamar bandearrach.”  But there are a few adjectives that either can only be used as a prefix, a few that are typically used as a prefix, and a few which just come before their noun without being a prefix as such.  Here are some examples:

1) Adjectives Used Only As Prefixes

drochaimsir, bad weather (“droch-” is only used as a prefix)

2) Adjectives That May Be Used As Prefixes

seanfhear, old man (“sean” may be used as a prefix although it can also be used is a separate phrase from the noun, as in “Tá sé sean.”)  “Sean” is somewhat unique in that it must be a prefix to be attributive.

Many adjectives, like “fuar” in the example below, can be used as prefixes to create compound words, even though they’re normally used in separate slots within the sentence (after the noun for attributive, outside the noun phrase for predicate)

fuaraigeantacht, coolness, imperturbability (“fuar” used here as a prefix although it  can also be used attributively in phrases like “seomra fuar” or as a predicate in”Tá sé fuar.”)

In fact, when you get into poetry and song, you’ll find many words created by taking adjectives and making prefixes of them, in combinations that wouldn’t typically be part of everyday speech, as in the following description of a young woman from the poem “Cúirt an Mheán Oíche“(written ca. 1780)

Very effective in poetry, but probably a little much for the average “sweet nothing.”

3) Adjectives That Can Only Precede Their Noun

By way of contrast, in English, the adjective usually precedes the noun (big boy, transcendental meditation).  A few exceptions were mentioned above: Attorney General, knight-errant, and Siege Perilous.  Here’s how they turn out in Irish:

a) Ard-Aighne, Attorney General.  The adjective “ard” is used as a prefix, indicating that this is a specific title.  If we just said “aighne ard,” it would most likely be translated as simply “a tall pleader” (not a particularly useful phrase!).  As part of the job title, “ard” conveys the sense of “high” or “of elevated status” (as in “ardrí“).  Related phrases include:

an tArd-Aighne, the Attorney General 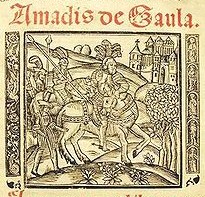 b) The phrase “knight errant” in Irish doesn’t exactly use an adjective “errant.” Instead , it uses the noun for “wandering” to describe the knight:

Interestingly, though, the word order is quite standard, unlike the archaic-seeming English “knight-errant.”  And this follows through for “knight-errantry”: 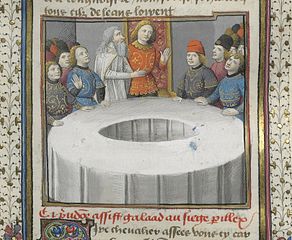 c) And finally, for “Siege Perilous,” with its romantic connotations of Arthurian legend plus its modern-day connections to Andromeda, Exalted, and Marvel Comics, I don’t see any exact equivalent in any Irish source.  I’d suggest “suíochán” (seat) followed by any of various words for “dangerous.”  These would most typically include “contúirteach,” “baolach,” “dainséarach,” and “guaiseach,” but I’m inclined toward “priaclach,” since it would have the same root as “perilous,” as in the French “Siège Périlloux,” the Spanish “Asiento Peligroso,” and even the Galego, “Asento Perigroso.”   But none of these combinations would have the archaic feel of “Siege Perilous.”  Arís, c’est la vie.  At any rate, we wouldn’t use “léigear” (beleaguerment), “forbhais” (act of beleaguering, however that parses differently from “beleaguerment”!), or “imshuí” (encompassment) since these all mean “siege” in the military sense.

So we’ve gone from exploring multilingualism and madness to Irish word order for nouns and adjectives in general in the last few blogs.  The takeaways?  The prefix “il-” with just a few examples of its usage (ilteangach, ilbhéarlach, ilghuthach, ilstórach). Teanga vs. (lower-case) béarla.  Buile vs. mire, máine, báiní, et al.  And, finally, the possible implications when word order is changed (Ard-Aighne vs. aighne ard.  And hmm, what happens in English if we say “Perilous Seat” instead of “Siege Perilous.”  Somehow that makes me think more of Séamas de Bond than An Rí Artúr! SGF – Róislín