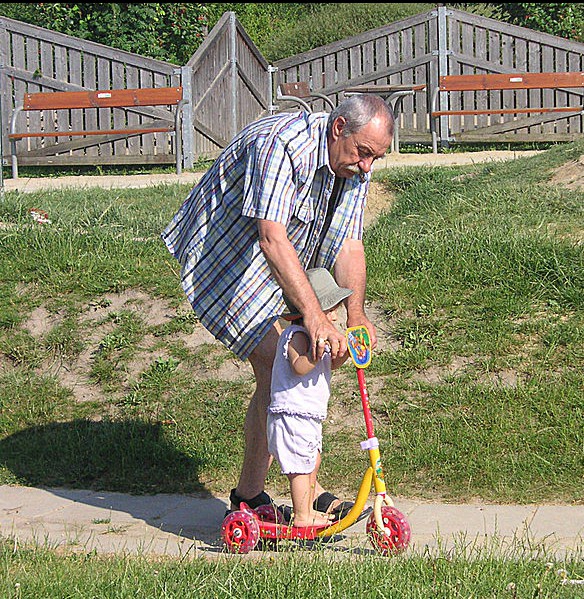 Over five years a-blogging and now it’s time to look back over the blianta (we started in 2009) and see what the most popular topics were.

So what’s the more familiar way for young children to talk to their seanaithreacha and seanmháithreacha, since those words are rather tongue-bogglingly long?  And what to do if the in-law grandparents have already claimed “Grandma” (or Nana or Granny) and “Grandpa” (or Gramps or Granddad or Papa)?  Irish to the rescue!

Irish Diaspora families will still have to decide whether to go the whole nine yards or not, by teaching their child to say “A Mhamó!” or “A Mhóraí!” for “Grandmother!” in direct address.  Or “A Dhaideo!” for “Grandfather!” in direct address.  The pronunciations for those are “uh WAH-moh,” “un WOR-ee,” and “uh ƔADJ-yoh!”  The symbol /Ɣ/ stands for a sound not found in English, similar to the “ch” of “chutzpah,” but lower down in the throat and gentler.  Irish-speaking children would naturally use the direct address form, just as they would with the names of their friends and family members (a Shinéad, a Shéamais, srl.).

blogs.transparent.com/irish/deirtusaslandeirimsehalosayinghelloandgoodbyeinirishcuidadogoodbye/ Posted on 24. May, 2013 by róislín in Irish Language

A baker’s dozen of greetings in Irish, ranging from the traditional blessings to ‘Haigh!‘ (sounds like “Hi!”) and “Haló” or “Heileo.”  And some musings on whether we can get away with saying “*Bhádap?” Or would it be “*Mhádap?”  Or is there a way to “whaddupize” the Irish colloquial greeting, “Aon scéal?” (lit. any story, i.e. any news).

And part two introduces six ways to use the word “slán” to say “goodbye” and when to use it for actually talking about health (“sláinte“).  The continuation is Deir Tusa ‘Slán,’ Deirimse ‘Haló’ (Saying ‘Hello’ and ‘Goodbye’ in Irish, Cuid a Dó: Goodbye), https://blogs.transparent.com/irish/deir-tusa-slan-deirimse-halo-saying-hello-and-goodbye-in-irish-cuid-a-do-goodbye/ (Posted on 27. May, 2013 by róislín in Irish Language)

Christmas gives us an interesting way to practice the different ways to say “woman” in Irish:

blogs.transparent.com/irish/beanorbanormnaormbanhowtosaywomanwomeninirishjustintimefornollaignambanon6january/, Posted on 05. Jan, 2014 by róislín in Irish Language

How does talking about Christmas in Irish help us practice Irish grammar?  With the phrase “Nollaig na mBan” (lit. Christmas of the Women), we see how “bean” (woman) changes to “na mban” (“na” for “of the” and “ban” for “of women” and eclipsis, which means we add the “m” and stop pronouncing the “b.”  Huh?  Just think of Slievenamon (Sliabh na mBan) in Co. Tipperary.  Its name means “the Mountain of (the) Women,” referring back to a Fionn Mac Cumhaill legend.  We don’t say “Slieve-nam-bon” in English and we don’t pronounce the “b” of “mban” in Irish, which after all, is the source of the current anglicized place name.  As for “mná,” léigh leat!

Everyone loves to talk about the weather, so we have …

7. Na Séasúir (The Seasons, in Irish) 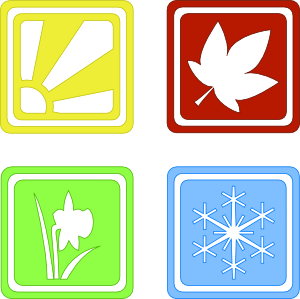 https://blogs.transparent.com/irish/na-seasuir-the-seasons-in-irish/ Posted on 21. Sep, 2011 by róislín in Irish Language

The phrase “the four seasons” doesn’t just refer to the luxury hotel chain or the American pop/rock band.  The term also refers to the changing temperatures as we proceed through the calendar year.  Winter, spring, summer and fall (autumn) – na ceithre shéasúr.  The word for one of the seasons actually means “harvest,” logically enough.  An cuimhin leat é?  Or the other three?

Some day I’ll do a little survey — are Irish language learners or speakers more likely to have dogs or cats as peataí.  But meanwhile, I lot of people seemed to enjoy this:

https://blogs.transparent.com/irish/catsgaloreinirishcaitcaitinipiscinipisinisrl/, Posted on 04. Dec, 2013 by róislín in Irish Language

We’ve checked off our alliteration with “grandparents” and “greetings,” so how about “grá” now?  It’s actually used in Irish English, as well as in Irish itself.  One recent example was Lorna Siggins’ article “Humpback with grá for Irish waters may have found a mate / ‘Boomerang’ observed feeding off southern Irish coast over ten seasons since 2001′ (http://www.irishtimes.com/news/ireland/irish-news/humpback-with-gr%C3%A1-for-irish-waters-may-have-found-a-mate-1.2407231, Tue, Oct 27, 2015, 08:30).  But assuming we’re talking person to person, not whale to whale, we might use some phrases from the next blog:

5. Saying “I love you” in Irish and Minding Your Velar Fricatives

https://blogs.transparent.com/irish/sayingiloveyouinirish/, Posted on 09. Oct, 2011 by róislín in Irish Language

Irish rarely actually uses the verb “to love” in Irish but it has many ways of expressing love and affection, mostly with nouns, like saying, “You are my love” (Mo ghrá thú), based on the word “grá” (love).  Check this blog post out if you’re going to be doing wedding cakes, tattoos, or jewelry inscriptions anytime soon.  Or if you’ll simply be whispering baothbhriathra mealltacha into someone’s ear.

From love to counting (Let me count the ways!), we segue to

Numbers are always a popular topic and here we have them up to 100 with the pronunciation.  The forms given here can be used for telling time, giving phone numbers and addresses, reading lottery tickets, saying bus or train route numbers, or if you’re so inclined, reciting strings of mystery numbers, as in ABC’s Lost (4, 8, 15, 16, etc.).  Why is that such a big deal?  Well, for example, Irish has three different ways of saying “four” — a ceathair a chlog (for time), ceithre chlog (four clocks, using “ceithre” for counting things), and ceathrar castóirí cloig (four clockwinders, if anyone still has that occupation, using “ceathrar” for counting people.  As for clockwinders, they got a dubious, well downright lascivious, rap in the traditional folksong, “The German Clockwinder,” ach sin scéal eile.   Anyway, you can’t wind a digital clock!

Speaking of counting people, we could also add ceathrar clogairí (four bell-ringers) and ceathrar clogadán (four dunces) and ceathrar cloigeog (four silly people, when you’re not simply saying “ceathrar amadán,” four fools), but I think the applications for those are even more limited.  Come to think of it, we could also add “ceithre chloigín” (four little bells or clocks, note that we’re back to the “ceithre” form, because we’re back to counting things not people), and for good measure, we could also, in another context, count “ceithre chloigín” for “four clots of dung hanging from the hind quarters of a sheep.”

All those numbers probably mean that someone graduated this year, so let’s congratulate them in the next blog:

So what do you say to the céimí?  Léigh leat le fáil amach!  And then there’s the world of sports or other arenas in which one may receive an award, like Katie Taylor, the Irish Gold Medal Olympian, who was featured in this blog post.  Many congratulations to go around!

Often the person graduating is someone we love — a family member or do stócach nó do chailín.  So the next blog might be helpful:

https://blogs.transparent.com/irish/deichndoigh10waysleiloveyouaraingaeilge/, Posted on 08. Feb, 2013 by róislín in Irish Language

Earlier in this top ten list, we already had love as a theme, but of course, it could inspire, dozens or hundreds of blogs even.  So this post gives us 10 ways to say “I love you.”  Probably the most widely used is “Mo ghrá thú,” which, as discussed in the blog, doesn’t use the verb “to love.”  How does that work?  Léigh leat le fáil amach! 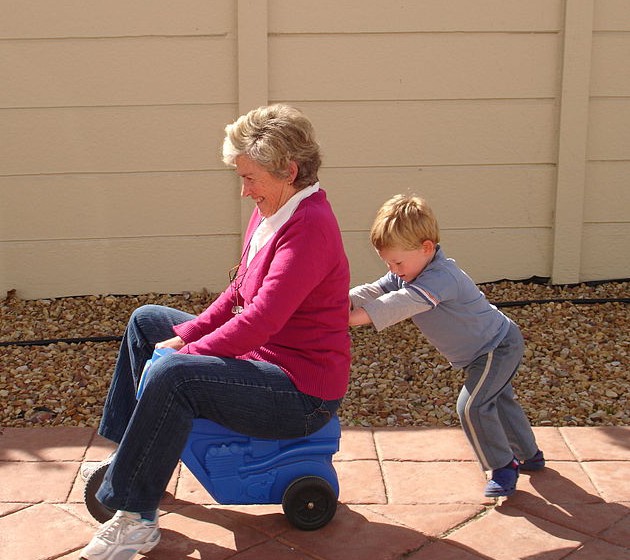 So, if “love” showed up twice as a favorite blog theme, so did “grandparents,” with the following blog the most viewed of all:

As promised then, grandparents, greetings, and grá, and many more other topics for learning or refreshing your Irish.  These were the top topics for 2015.  Let’s see what the bliain nua brings.  Bí linn!  — Slán go fóill agus Athbhliain faoi shéan agus faoi mhaise duit! – Róislín