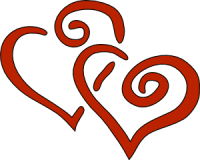 So, Irish has lots of ways to say “I love you,” but most of them don’t involve the verb “to love.”  How is that supposed to work?  Bhuel, with lots of téarmaí ceana (terms of endearment)!  In other words, you mostly use nouns to say that someone is your sweetheart, your darling, your pulse (yes, it gets rather anatomical), your heart, your snookums.  Um, let’s backtrack.  Quit while we’re ahead.  I don’t think there’s really an Irish equivalent to “Snookums.”  Sweetheart, darling, dear, love, love of my heart — that’s more the Irish style.

In case you’re wondering about the verb that would mean “to love” (I love, I loved, I will love, etc.), it does exist and was discussed in a previous blog in this series, “An Briathar “Gráigh!” (Love!) i nGaeilge,” posted 14 Feabhra 2011 (https://blogs.transparent.com/irish/an-briathar-%E2%80%9Cgraigh%E2%80%9D-love-i-ngaeilge/).   But as you’ll see from that blog, the verb “to love,” as such, is almost exclusively limited to Biblical or very formal usages, such as: “Óir ghráigh Dia an domhan chomh mór sin gur thug sé a Aonghin Mic uaidh i dtreo  …”.  You might recognize that as coming from Eoin 3:16.  (Aistriúchán-1 thíos / translation-1 below).   And, of course, there will always be some Google search results with the verb “gráigh” (gráim, gránn, ghráigh, gráfaidh, srl.) from people using machine translation, or just translating word for word from a dictionary and then posting the result.  But that doesn’t mean such phrases are really used in everyday life.

Anyway, getting back to what people actually do say as an equivalent to “I love you,” here are some possibilities.  We’ve seen some of these terms in previous blogs, but mostly in direct address (a stór, a chroí, a chuisle, a thaisce, srl.).   Here, we’ll put them into short sentences, with the basic structure of “You are my darling” or “…sweetheart,” etc.  In most cases, words like “darling” and “sweetheart” are interchangeable as translations.

2. Is tú mo stóirín.  You are my (little) sweetheart (the “-ín” element is diminutive, but if anything, it just makes the term even more affectionate; it’s not demeaning or “babeifying”)

4. Is tú mo chuisle.  You are my pulse (remember, “cuisle” which literally means “pulse,” is a term of endearment, as also seen in the anglicized forms “acushla” and “macushla“)

6. Is tú grá geal mo chroí. You are the bright love of my heart.

Another approach to saying “I love you” involves leaving out the verb altogether.   So we have a verb-less phrase functioning just fine as a complete sentence (no “is,” no “love” verbs).  The following example is actually probably the most widely used in Irish and is recommended for inscriptions  (on jewelry, for example) or tattoos:

Of course, saying that one aloud involves the voiced velar fricative sound, represented phonetically by the gamma sign /ɣ/.  This throaty sound is not in English but it is found in Scottish Gaelic, Aleut, Yemenite Hebrew, Arabic, and Klingon, where I think it exemplifies the gutturality of that invented tongue.   You can hear the sound at http://en.wikipedia.org/wiki/Voiced_velar_fricative (cliceáil ar an gcomhad fuaime).   For that matter, you can also hear it at http://www.omniglot.com/language/phrases/klingon.php if you click on lupDujHomwIj luteb gharghmey.  In Klingon, as in Irish, the sound is written with “gh,” so the last word is where you’ll want to focus your attention.  As for what that phrase means, here’s the Irish, “Tá m’árthach foluaineach lán d’eascanna” (as listed by http://www.omniglot.com/language/phrases/irish.php).  I give the English below (aistriúchán-2) but not right here, just to avoid the temptation for readers to use the translation instead of working it out.  Eyeball-motion tracking and all that.  For even more on velar fricatives and saying “I love you,” you might want to check out this previous blog: https://blogs.transparent.com/irish/saying-i-love-you-in-irish/

I suppose, come to think of it, for a tattoo, at least for one that’s visible to the public, you might want to add the loved one’s name, as in “I love you, Mary” or “I love you, John.”  So you’d add the name in direct address (Mo ghrá thú, a Mháire! or Mo ghrá thú, a Sheáin!).  For the inside of a wedding ring, presumably, only the intended would see the inscription, so adding the name would be optional — but a nice touch!

And finally, here are three more options, bringing us up to deich (10) ndóigh le “I love you” a rá:

9. Táim i ngrá leat OR Tá mé i ngrá leat (I’m in love with you); pronunciation tip: for “i ngrá,” let the two words run together, like “ingraw,” with the softish “ng” sound of English “singing” (not like “finger”).  Since this phrase refers to being “in love” (i ngrá), it’s meant for one’s significant other, spouse, etc.

10. Tá mo chroí istigh ionat (My heart is within you), or more literally, “inside in you.”  In Irish, the “in” element gets repeated with phrases for “inside” something (istigh sa teach, inside the house, lit. inside in the house; istigh sa siopa, inside the shop, lit. inside in the shop).  The word “ionat‘ comes from the preposition “i” and literally means “in you,” the “-t” ending signifying 2nd-person singular.

[Nóta breise, 10 Márta 2019: an additional phrase: Mo chuach thú! (lit. you are my tress/curl/ ball/ bundle/hug/embrace — admittedly none of the literal translations really seem to match the sentiment exactly).

As for “snookums,” and its cohorts “diddums,” “huggums,” and “sweetums,” I really don’t know of any Irish terms that convey that certain endearing but sometimes infantilizing je ne sais quoi!

If you’re looking for even more phrases to talk about love and related, um, functions, you might enjoy the recently published book, Cliúsaíocht as Gaeilge, by Rossa Ó Snodaigh (of the band Kila)   I’ll let you figure out the most relevant meaning of “cliúsaíocht” and its “agent” term, “cliúsaí,” (the person who does be “ag cliúsaíocht“).  Suffice it to say, it’s apropos to a téama Vailintín.  For a quick answer, you can also find the English subtitle by checking the link: http://www.coisceim.ie/cliusaiocht.html  The book has general information about the Irish language, including greetings.  The basic ones (Dia duit, Aon scéal, etc.) are a good first step if you want to eventually move on to the more advanced topics, like discussing círíní cluaise (aka maotháin chluaise) and loig bhoilg (aka imleacáin).  Not to mention ranna eile an choirp.

The text of Cliúsaíocht does get pretty explicit and the illustrations keep pace, so it’s definitely meant for the mature reader.  In keeping with its subject matter, anything goes.  So, forewarned is “four-armed.”  Which is probably all the more useful since the couple depicted on the cover not only sport four arms, reasonably enough (and very sporting arms they are!) but they also have six legs between them.  Well, not “between” as such, there’s not much “between” them at all at all!  As intertwined bodies, I think we can also safely say that the couple have created the “two-backed” beast.  All nicely incorporated into some clever Celtic knotwork-style artwork, provided by Frantisek Valouch.  Food for thought for new ways to count, séimhiú, and all, in Irish (dhá dhroim, ceithre lámh, sé chos)!  Bhuel, sin é don bhlag inniu.  SGF, Róislín

Nóta faoi na focail “log boilg” agus “imleacán”: First, pronunciation: “log” is with the Irish short “o,” as in “pota,” not like the English lookalike, “log” as in “tree.”  Also, “boilg,” like “bolg,” has two syllables, with the “uh” sound between the “l” and the “g.”  As for the literal meaning, “log boilg” is “hollow place of belly.”  It does have a friendlier sound, at least do mo chluas féin, a little more “bellybutton-ish” rather than “navel-ish.” “Imleacán” (navel) is a more formal term and it’s actually a cousin of the Latin word “umbilicus,” which in turn is related to “omphalos (ὀμφαλός)” as in all that world-navel Delphi and Joycean Martello Tower stuff.  “Imleacán” is used for various medical terms, such as “bindealán imleacáin” (umbilical bandage).

Aistriúchán 1 (Eoin 3:16, Óir ghráigh Dia an domhan chomh mór sin gur thug sé a Aonghin Mic uaidh i dtreo  …): And God loved the world so much that He gave from Him His only begotten son so that ….  Gluaisín don aistriúchán sin: domhan [DOH-wun], world; chomh [khoh], so; thug [huhg, silent “t”], gave; aonghin [ayn-yin], only-begotten (re: child); uaidh, from him; i dtreo, so that, lit. “in direction”

As for the Klingon, níl mórán Tliongáinise agam (yet!), but I can tell you that “gharghmey” is used here for “eels,” with “-mey” being the plural suffix.  So if you want to practice the voiced velar fricative some more, you can also try the singular, “ghargh.”  As I understand it, “ghargh” is actually “sea worm,” but it appears to be close enough for this catchphrase.  Practicing Klingon is actually a good way to master the velar fricatives you need for Irish!  Comments welcome from any saineolaithe Tliongáinise.