Jokes You Only Get If You’ve Studied Latin Posted by Brittany Britanniae on Mar 31, 2015 in Latin Language

In honor of tomorrow being April Fool’s Day, (Last year I wrote a very popular post on April Fools if you are interested), I wanted to impart some jokes and humor for those Latin lovers, Latin users, and Latinists! 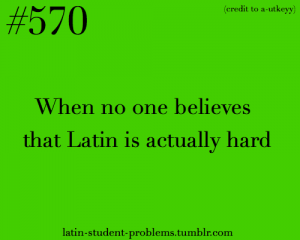 Many people think when you say you study Latin that it is easy or simple, but this is not the case!  Latin is complex and difficult. Luckily, there is a great post that will help any newbie with learning Latin: ” So You Want to Learn Latin: Stay Calm & Read On” here. 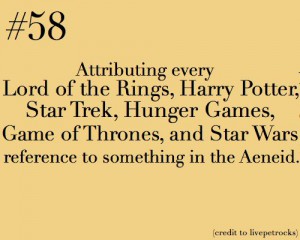 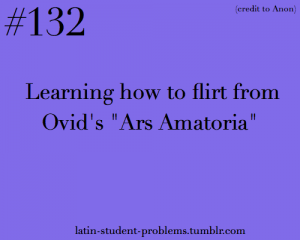 Ovid, the Roman poet, give love advice freely (perhaps too freely from some emperor’s tastes).  Here are “5 Dating Tips from Ovid” which show how the ancient poet’s advice isn’t that different from the trends of today. 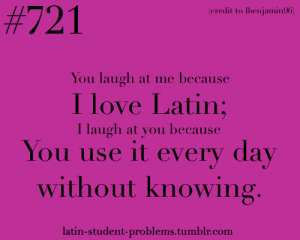 This can be seen with “Abbreviations that are Latin” post here. 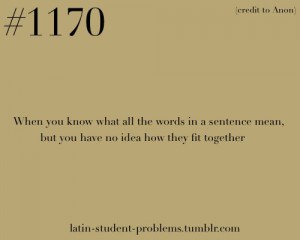 I find this to be a common problem among students who translate sentence by sentence and do not pay attention to form or grammar. Commonly, this happens only in the first year or two- but more advanced students rarely have this problem. However, here is a great post on how to address each sentence in regard to verbs, nouns, adjectives, and adverb, “How One Sentence Can Teach You So Much.” 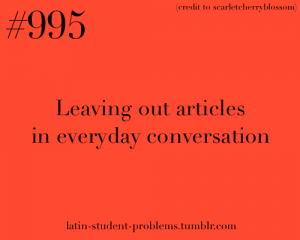 I saw this one affecting me and all my peers after a while in our native language and even writing. 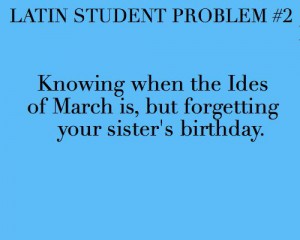 Well, most people know the basic information of the Ides of March, but did you know these factoids about Julius Caesar? 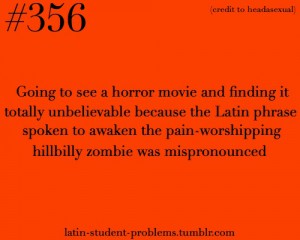 This idea is a bit of a pet peeve of mine. If I am watching some (Witches of Eastwick on Lifetime) and the Latin is incorrect or everything is in the nominative form and 1st person singular verbs-when it shouldn’t be. I go a little crazy and refuse to watch anymore. However, here is a post on “Latin in TV shows” that tend to get the Latin right.

#9. Students Dropping Out Between Classes 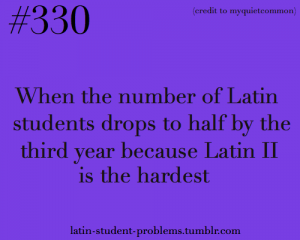 It is trend between quarter, semesters, or sessions that students seem to drop out of Latin course and the class get smaller and smaller until there are only a handful of people. However, fear not those who stuck with it! You have joined an elite group of individuals who have dedicated part of their lives to Latin. Check out this post on Famous People who Studied Latin!

#10. The Uses of the Ablative are Endless 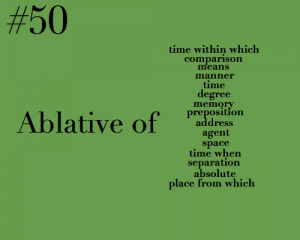 If you are interested in the some of the basic or more popular ablative uses; check out our blog on “How to Survive the Ablative Case” here.

I hope these were fun to read through and made you feel a bit more “at home” with being part of community of Latin lovers!