A verb determiner is a marker or a suffix that comes at the end of a verb to distinguish it from other parts of speech. Any word that accepts one or more of these markers or determiners is no doubt a verb. 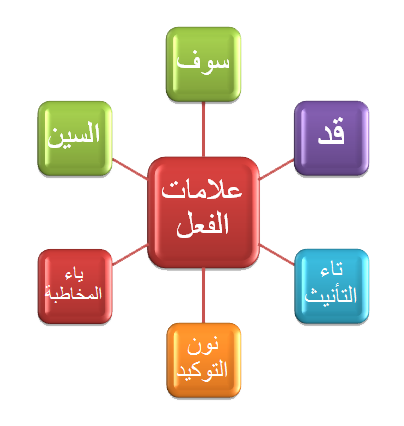 There are four determiners or markers to distinguish Arabic verbs. If a word accepts one or more of these determiners, then the word is a verb:

In the above Arabic examples, we do not need to mention the subject pronouns I أنا or You (male) أنتَ or You (female) أنتِ because we replaced it with the Taa of the Subject that is attached to the end of the verb…etc. This Taa pronoun has a Haraka (Fat’ha, Damma or Kas’rah) on it; Arabic Diacritics.

2- The Consonant Feminine Taa (تــاءُ الــتــأنــيــثِ الــســَّــاكـِـــنــَــة): This Taa (تْ) is different. It has a Su’koun on it and refers to a feminine subject. It comes at the end of the feminine past tense verbs, too.

In Arabic sentence analysis, we just say that the Taa is the Feminine Taa and the subject is (often) the invisible (implicit) pronoun (she).

3- The Yaa of Address (يــَــاءُ الــمــُــخــَــاطــَــبــَــة): In imperatives, we have no problem addressing males. However, to address a female with an imperative, you must use this Yaa suffix at the end of the verb and it is called the Yaa (ى) of Address. This Yaa is also used with present tense verbs; (Revise Arabic Pronouns II).

4- The Affirmative Nuun (نــونُ الــتــوكــيــد): This suffix is a Nuun (نّ) with a Shaddah on it and that comes at the end of future tense verbs or verbs used to give an oath for the purpose of affirmation or confirmation and shows that you are serious. It can be used by either males or females.

To sum up, if a word accepts one or more of the above determiners, then this word is a verb.