For the past few months, we’ve been going all across China and getting to know this massive country better. So far, we have covered two municipalities and six provinces. In case you’ve missed any of it, here’s a quick rundown:

Today, we’re going to switch it up a bit and move on to cover one of China’s autonomous regions (自治区 – zì zhì qū), as we head to Inner Mongolia (内蒙古 – nèi méng gǔ).  If you’re confused about the name, Inner Mongolia is actually a part of China, while Outer Mongolia is the actual country, which most people just simply call Mongolia.

An introduction to Inner Mongolia from “Beautiful China.”

As you can imagine, this area has a complicated and interesting history.  Back in the Zhou Dynasty (1046–256 BC), the area that is now known as Inner Mongolia was split up between the western/central section, where various nomadic peoples called home, and the eastern section, which was home to a Mongolic people called the Donghu (东胡 – dōng hú – lit. “Eastern Barbarians”). In 221 BC, Qin Shihuang unified China and he incorporated an existing structure in this area into his Qin Dynasty Great Wall.  Worried about the threat posed by various tribes such as the Xiongnu (匈奴 – xiōng nú), the Emperor sent one of his top generals to defeat them and expand the empire. Over the coming centuries, this struggle between dynasties and tribes would continue, going up and down in balance of power.  That is, until Genghis Khan came along.

In 1206, Genghis Khan finally managed to unite all of the Mongolian tribes and begin his Mongol Empire.  He managed to conquer both the Xia and Jin Dynasties with his new found power.  Fast forward to 1271, and his grandson Kublai Khan established the Yuan Dynasty, and his summer capital was called Xanadu in the area that is now Inner Mongolia. Eventually, the Han Chinese led Ming Dynasty defeated the Yuan, and they rebuilt the Great Wall of China where it stands today, with much of it running along the southern border of Inner Mongolia.

During the Manchu led Qing Dynasty, Mongolia was split into Outer and Inner regions, and increasing numbers of Han Chinese were illegally settling in the area.  Mongolia gained its independence from the Qing in 1911.  With the fall of imperial China at the end of the Qing, the Republic of China managed to quell Mongolian rebellions and have the princes of Mongolia officially recognize Inner Mongolia as part of China. 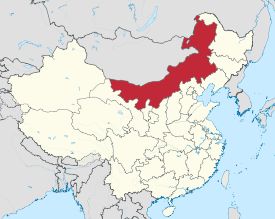 Inner Mongolia on the map. 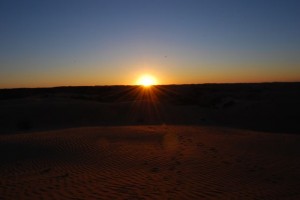 Sunset on the Inner Mongolian desert.

Thanks to Mongolia’s strange shape on the map, the area features a wide variety of climates.  That being said, most of it does see four distinct seasons.  Winters here are long and bitter cold and often feature blizzards.  Spring is nice and warm, but dangerous sandstorms that whip through make it not so pleasant.  Summer here is short and hot, and most of the rainfall comes around this time.  Fall is brief as well, and temperatures start to plummet early, dropping below zero in the north as early as October.

As of the 2010 census, Inner Mongolia has a population of over 24 million, meaning it accounts for just 1.84% of Mainland China.  Not surprisingly, a majority of the population are Han Chinese, at about 79%.  That being said, there are a substantial number of Mongols living there, as they account for about 17% of the population.  All in all, it’s said that forty-nine ethnic groups call Inner Mongolia home.

With such a diverse population coupled with the fact that Inner Mongolia stretches across such a vast area of China, it should come as no surprise that a variety of languages are spoken here.  You’ll find different dialects of Chinese as well as Mongol, making it so that people from one part of Inner Mongolia can’t even understand people from another.  By law, street signs come in both languages. 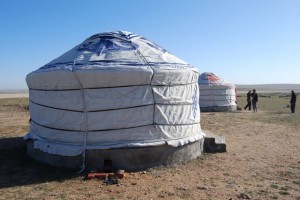 Yurts out in the grasslands.

The grasslands are a symbolic part of the culture of Inner Mongolia, and they are often mentioned in songs and depicted in paintings.  Mongols here still practice their traditional arts, and many of these can be enjoyed during the traditional festival of Nadam.  This features the three traditional Mongolia sports – wrestling, horse-racing, and archery.  Other aspects of the culture here include living in traditional yurts (蒙古包 – méng gǔ bāo) and eating plenty of lamb (羊肉 – yáng ròu).  Music is also very important here, such as traditional Mongol throat-singing and the interesting horse head violin (马头琴 – mǎ tóu qín). 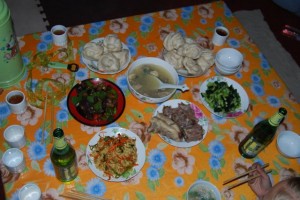 A traditional feast in the yurt.

A cultural clash between Mongolians and Chinese about throat singing. 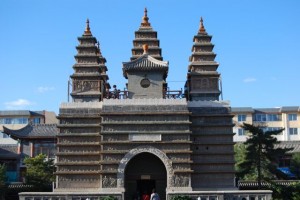 One of Hohhot's many temples.

Of course, the most famous place to visit in Inner Mongolia are the aforementioned grasslands.  Staying in a yurt, horseback riding, and singing songs around a fire fueled by cow’s dung is very popular amongst visitors, as is a a visit to the desert (沙漠 – shā mò), where you can partake in sand-sledding or ride a camel.  The capital city of Hohhot is also worth a visit, with its many temples and museums.  In Ordos city, you’ll also find the Mausoleum of Genghis Khan.

A video from my 2010 trip to the grasslands and desert around Hohhot.

With its fascinating history, mix of cultures, charming grasslands, delicious food, and unique traditions, Inner Mongolia is definitely one of the most interesting places to visit in China.  To be honest, the only reason we ended up on a trip there back in 2010 was because train tickets for our first eight choices were sold out.  However, we had a great time wandering around Hohhot and exploring the desert and grasslands.  It may not have been at the top of my travel itinerary back then, but after having gone, I’d advise you to move it to the top of yours.