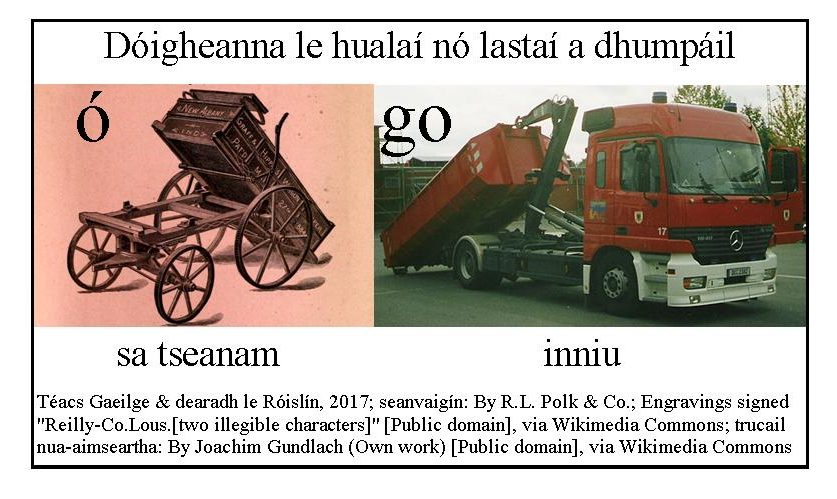 Bhuel, I thought I was finished with dump trucks and the like when I came across one more related term in Irish, with a very interesting structure to boot  — trucail chrochta, a tip-truck, which apparently is an Australian English word for a tipper or tipper lorry.  A Astrálacha ar an liosta seo — can you confirm?   And even more to the point, is the phrase “trucail chrochta” used much in the Irish-speaking community there?  Literally, “trucail chrochta” means “hanging truck,” or even more literally, “truck of hanging,” referring to the hinged mechanism, I presume.

So why do we have “trucail dumpála” without lenition and “trucail chrochta” with lenition (C becoming CH)?  Remember our old friend the D-N-T-L-S rule?  That’s the rule that tells us that mutations are usually blocked when any of those five letters are adjacent.  This is especially common after “an” (the), with many examples in phrases like “ag an doras” (not “dhoras” or “ndoras,” although the latter is possible in dialect) and after the prefix “sean-” as in “seansaighdiúir” (old soldier, veteran).  In contrast, we would have “ag an mbord” and “seanfhear,” both showing mutations in a non-D-N-T-L-S situation.

“Dumpála” does not become “dhumpála” after “trucail” because we have a “D” following an “L.” But “crochta” does become “chrochta” because the letter “C” is not affected by the D-N-T-L-S rule.

Since we ended up revisiting “dumpairí” anyway, I figured it would be interesting to take a peak at the history of the concept, hence the graphic above.  Although I find no precedent for the phrase, I suppose we could call a “wagon dumper” a “vaigín dumpála” in Irish.  In adapting the word “wagon” to Irish, remember that the letter “W” is very rare in Irish.  Offhand, the only word that comes to mind including “W” is “wigwam,” listed in various Irish dictionaries as the word for <drumroll> … “wigwam.”  It’s certainly not a traditional Irish word, ní gá le rá, and hasn’t been modified for vowel harmony the way “móideim” and “íoglú” have.  Further investigation for “w-words” yields … bhuel, not much: “watt” directly from English, but this can also be “vata.”  The abbreviation apparently stays “W,” much the same, I suppose, as “km” remains the abbreviation for “kilometer” although the Irish alphabet traditionally doesn’t include the letter “K,” most “K-words” being spelled with a “C” in Irish, like the place names An Chóiré (Korea) and  An Chéinia (Kenya).  This may also apply to surnames, like Mac Dhiarmada for “Kermode” or “Kermit,” with the “C” of “mac” giving us the K sound).  “Kermit,” of course, can also be a first (given) name, as in Kermit the Frog.  Or wait, is that simply a mononym?    And what’s the Irish for a mononym?  So far, I can’t find anything, but I suppose it’d be “*monainm.”  Barúlacha ar bith agaibhse?

Anyway, also remember that in “vaigín” there is a hard “g” sound, and it’s slender, as in Irish “creig” or “ceaig” or “naigín” (a noggin), not as in Irish “muga” or “ruga” or “fágaim.”  It’s a slight difference, but audible.

So that’s one more phrase for a type of truck.  No doubt there are more (and how about the “honey wagon,” which is really a type of truck?) but that’ll have to wait for “am éigin eile.” – SGF — Róislín