Ahlan أهــْــلاً , Arabic lovers! Today’s post will be the first of a series to explore the beauty of the Arabic language through the study of some special phrases and sentences. I will explain the sentence or phrase, translate it and compare it to a similar one. We will also explore the importance of diacritics (word endings) in determining the correct meaning of a word. We will do a full sentence grammatical analysis, too. Happy learning! 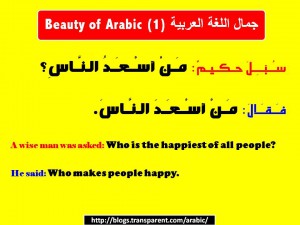 A wise man was asked: Who is the happiest of all people?

So he said: Who makes people happy.

The photo and the dialogue above tell a small story of a wise man being asked a small question. When the wise man replied, he used the very same words. He just changed the endings. His reply was both short and eloquent. Let’s analyze in further detail.

The short answer to the question should translate as follows:

The happiest of all people is the one who makes people happy.

He who makes people happy is the happiest of all people.