Cúig Ghuta Dhifriúla (a, e, i, o, u) i bhFocal Amháin–faoi dheireadh! Posted by róislín on Aug 8, 2013 in Irish Language 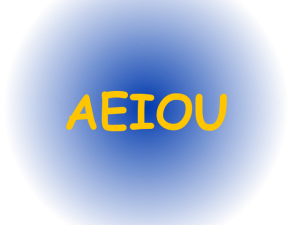 For the same reason that people compile lists of English words that have all five vowels, write novellas with just one vowel  in them, and seek desperately for the rhyme to “porringer,” I’ve always been on the lookout for an Irish word that has all five vowels.  Agus faoi dheireadh thiar thall, tháinig mé ar cheann!  That’s not to say there aren’t more, and perhaps I’ve seen them before but just never made a note of it.  And I may as well mention that in our discussion here, we have the five gutaí gairide, not the gutaí fada, but I would have been happy with a word that combined both.

And the question now is … can you figure out the “quintovocalic” word from just the consonants?  Seo na consain:

Another hint is that the first vowel will be “o.”

Another hint is that, yes, it’s a “comhfhocal” ([KOH-OK-ul, with the “mh” and “fh” essentially silent], compound word), so it has two separate elements that come together to form a new meaning.  Otherwise, even for Irish, “-rshr-” would be a very unusual combination.

And now, chun leid amháin eile a thabhairt daoibh, the guta deireanach is “u.”

An bhfuil sé agat anois?  Do you have it now?

And the word is “oighearshruth” (glacier).

btw, I was deliberately stretching out my sentences and paragraphs there to create as much distance as possible between na leideanna and an freagra.

So, let’s take a closer look at ár gcomhfhocal, “oighearshruth.”

Its other forms are:

an oighir [un OY-irzh], of the ice (dath an oighir, the color of the ice)

Its other forms are:

an sruth (no change), the stream, current, flow

srutha, of a stream, current, or flow

an tsrutha, of the stream, current, or flow

And, just in case you were wondering, an “ice floe” (as opposed to a “flow of ice”!) is either an “oighearshlaod” [OY-ur-HLAYD] or a “grúm,” a short but intriguing-looking word, which to me sounds more like the name of an Icelandic dwarf (channeling Tolkien?) than an Irish word for “ice floe.”  How can a word for an “ice floe” not be a compound word?  Ceist do na hIonúitigh, is dócha.  And, btw, there is also a completely different word “grúm,” meaning “bridegroom.”

So there we have it, cúig ghuta, or to be even more precise, cúig ghuta ghairide.  Focal leis na gutaí fada go léir–I don’t think so.  But one never knows!

Curiously, it seems that just because a word is exceptionally long doesn’t necessarily mean it will have all five vowels.  In Irish, we have the place name Muiceanach idir Dhá Sháile, which is anglicized as “Muckanaghederdauhaulia.”  But there’s no “o” in either the Irish or the English version, so, for our purposes, no “o,” no go!

In case you’re wondering what this logainm means, it’s “piggery between two briny places.” “Muiceanach” is based on “muc” (pig).  “Muc” rhymes with American English “look” and “book,” but not with “luck” or “buck,” so it’s not pronounced the same as English “muck,” even though we might somehow associate “muck” with a “muc,” as we muck out barns or muckrake (muckraking the “pork barrel” is the tenuous connection there!).  The English word “muck” in the sense of farmyard dung, filth, dirt, or general useless trash is cognate to the Icelandic word “myki,” which means <torrrrrmáil drrrrruma> < torrrrrmáil drrrrruma ar leanúint, for extra effect, and hopefully to build the suspense> “cow dung.”

Come to think of it, it’s similar in English, where one of the more widely used really long words doesn’t grace us with all five vowels: antidisestablishmentarianism (4 a’s, 2 e’s, 5 i’s, but no o’s or u’s).  And one relatively short, 6-letter word does have all five: eunoia. In rhetoric, it means “goodwill” in the relationship between a speaker and an audience and, in psychology, it means “normal good mental health,” as opposed to, say, “paranóia” (paranoia) or an obsolete word which may well rest in peace, “morinoia”  (last use I found being ca. 1912; no Irish equivalent, fad m’eolais).

And now, of course, to ponder the question in Irish.  Long words, all five vowels?  Not always.  The Irish for “antidisestablishmentarianism” is “frith-dhíbhunaíochas” (níl ann ach ceithre ghuta dhifriúla) and for “eunoia,” I find nothing.  Even my next closest example, the Biblical name, Eudoia (now also a place in Queensland, Australia), has five vowels in English but only “a,” “e,” “i,” and “o” in Irish: “Eoidia” with only ceithre ghuta dhifriúla, thus knocking it out of the running. Due to vowel harmony, no doubt.

Why should anyone care whether a word has all five vowels.  Níl a fhios agam.  I guess it’s contagious, though.  If you know that other people are interested in a topic, you might be also.  I can’t help but wonder what the paleontologist M.W. de Laubenfels was thinking when he created the genus name IOUEA for a group of Cretaceous fossil sponges (for an explanation, see: http://digitalcommons.butler.edu/cgi/viewcontent.cgi?article=4843&context=wordways)

As for the topics introduced in the first paragraph of this blog, I can at least say the following.  Google currently shows over 8 million hits for the search “words with all five vowels,” so it seems a good few people share my interest.  There are many varieties of lipogrammatic writing (texts deliberately constrained or restricted to the use of certain vowels or consonants), of which George Perec’s 1972 Les Revenentes [sic], with only the vowel “e” and his 1969 La disparition with only the vowels “a,” “i,” “o,” and “u” are two classic examples.  As for the rhyme for “porringer,” at least 206,000 others share my curiosity, according to my most recent Google search.  There is one answer, although it is a bit deliberate, ‘(He gave her to an) Oranger.’  Actually, I learned the rhyme and the answer in early childhood from that erudite and omniscient scholar, Mother Goose, who wrote “What is the rhyme for porringer, O what is the rhyme for porringer?  The king he had a daughter fair and he gave the Prince of Orange her.”  The rhyme still works … and talk about politics and nursery rhymes!  If you want to read any more on that topic, I’d simply suggest James Branch Cabell’s 1905 short story, “The Rhyme to Porringer,” which may be one of the few works of literature based on the concept of obscure rhyming.  As for the convoluted word order in “He gave the Prince of Orange her,” well, it is Mother Goose, after all.

And to wrap the above discussion up with one last Irish angle on it all, the Irish for porringer is “porainséir,” for which there is a reasonable assortment of rhymes (strainséir, for one).

If, after all, you’re not that interested in how many vowels a word has, at least this blog enabled you to practice, deconstruct, and pronounce an intriguing looking Irish word, “oighearshruth,” and hopefully you’ll find some application for it.  SGF, Róislín