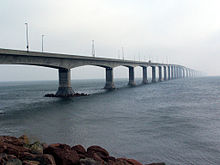 I couldn’t resist spending a little more time with bridges (droichid) since Canada’s Confederation Bridge has such a clever nickname, as bestowed by …, hmm, which Irish person?  (freagra thíos).

Just a quick review of the phrase “Droichead na Cónaidhme,” before we get to the nickname:

na [nuh], here it means “of the,” leading into the possessive part of the phrase

na cónaidhme, of the confederation

And, of course, given that this bridge is in Canada, we shouldn’t forget “an Fhraincis“:  Pont de la Confédération. It’s interesting to note how the three languages (Béarla, Gaeilge, Fraincis) structure the phrase differently.  English uses “Confederation” as an adjective (technically, an “attributive noun”).  Irish uses “an tuiseal ginideach” (the genitive case), adding an ending to “cónaidhm“), and French uses a prepositional phrase (de la) to add the description to the bridge.

Given its Canadian maritime location, I also hunted a bit online to see if the bridge also has a Micmac name, which would seem fitting. I didn’t find anything official but I did find an interesting article on “The Abegweit Crossing” as a proposed name, based on the Micmac for “lying in the water” or “lying parallel with the land.”  The pithy title of the article, “Nincompoop Bureaucrats Bungle a Bridge Name,” reflects the opinions of its author, Bill Casselman, who writes extensively on etymology and words, especially home-grown Canadian ones, on his website (http://www.billcasselman.com/).  The article can be found at http://www.canadiangeographic.ca/magazine/ma97/tongue.asp.

If, by any chance you’re wondering about the Irish for “nincompoop,” two of the choices are “gamal” and “amadán,” which simply mean “fool.”  Casselman also refers mordantly (finally, a chance to use that word! — “go goimhiúil” in Irish) to mugwumps (“glum mugwumps,” no less), bullyboys, and muckamucks, all of which might eventually prove to be grist for this mill (i mblaganna eile sa todhchaí).

But back to our main topic, the wittily created Irish moniker for the Confederation Bridge.  By the way, the word “Irish” is used here just in regard to nationality and culture.  The original phrase is in English and I translated it into Irish just for this article (no sign of it elsewhere online, fad m’eolais).  So let’s translate “Réise na mBeann Glas” back into English and see what we get.  At some point, the phrase may jog your memory, or at least pique special interest among Lucy Maud Montgomery fans.

na, of the (this time leading into a plural phrase — and how do we know that? by the eclipsis / urú that follows: “mBeann” instead of “Beann”

mbeann [myawn or myown, the “ow” of the latter like “gown” or “frown,” not like “own” or “shown”): this is a plural form of “binn,” which is one of those prize-words in Irish that can mean about 15 different things, primarily “peak” or “gable.”  With urú (“b” becoming “mb”), we see that this is genitive plural, so “na mbeann” here means “of the gables”

The above, of course, refers to when “binn” (peak, gable, etc.) isn’t busy as the homonym “binn,” a completely different word meaning “sweet” or “melodious,” as in the famous proverb, “Is binn (sweet) béal ina thost.”

glas [glahss], green; this is another word with a major homonym (“glas” as “lock,” as recently discussed in https://blogs.transparent.com/irish/an-bhfuil-do-ghlas-crochta-gra-crochta-agat-fos/).  But here we are concerned with “glas” as a color.  Sure, we could make a case for another color term, “uaine” (green, especially for man-made or painted things), so I’m just going by precedent, such as the article by Breandán de Gallaí about Oileán Phrionsa Éadbhard (http://www.beo.ie/alt-charlottetown.aspx).  Since this and the scant handful of other references in Irish to “Áine na mBeann Glas” (Anne of Green Gables) already use “glas,” I’ll follow suit.

So that brings us back to the full phrase, “Réise na mBeann Glas,” which, in the original English was “Span of Green Gables.”  Touché, a Mháire Mhic Ghiolla Íosa (Uachtarán na hÉireann, 1997-2011)!  OK, I admit, the Irish is just my translation.  It’s the English that really carries the wordplay in this case.  But it makes for a good teachable moment, a chance to consider the issue of multiple names for the same place or thing, indigenous names, and the specific words, “réise” (span), “binn” (peak, gable, corner, edge, margin, etc.), and “glas” (green).  And it also gave us a workout with the genitive plural (“binn” becoming “mbeann“).

I’m curious if Mary McAleese’s pun was the result of a sudden brainwave at the site, which she visited in 1998, or if she had thought it out in advance.  And I guess the next question is whether she is a “kindred spirit” (as Anne fans like to call themselves), hmmm, “duine d’aon mhianach” i nGaeilge, or whether her interest in Anne Shirley was just in passing.  For many people, especially women it seems, it depends on whether they read the original book as a child and used it a role model  or for comfort as they had to meet their own challenges growing up.  The “Kindred Spirits” have generally read all the L. M. Montgomery books, make regular pilgrimages to Prince Edward Island to see the Anne sites, and participate in research (e.g. The L. M. Montgomery Institute, http://www.lmmontgomery.ca/), fan activities (e.g. the Japan-Prince Edward Island Society, http://japan-pei-society.org/english.htm) and tourist activities (e.g. http://www.tourismpei.com/anne-of-green-gables#).  And of course there’s lots of Irishness to explore in regards to “an Áine rua sin,” who a hundred years ago proclaimed, i mBéarla ar ndóigh, “Is í brón mo shaoil mo chuid gruaige rua.”  To judge from the great popularity of red hair today, from Celtic Woman CD covers to Karen Gillan and Isla Fisher, you’ve come a long way, a ruafholtacha!

Whatever triggered McAleese’s “Span of Green Gables” quip, it certainly seems to follow the pattern already established with such witty nicknames for public works of art in Ireland as “The Tart with the Cart” (Molly Malone), “The Floozie in the Jacuzzi” (Anna Livia as the River Liffey, also borrowed for “The River” in Birmingham), and “The Time in the Slime” (the short-lived underwater clock in the River Liffey, meant to celebrate the new Millennium).  It’s interesting how these nicknames seem to spring up overnight and yet do we ever know who first thought them up?  Bhuel, ábhar blag eile, is dócha, an méid agus is féidir! SGF — Róislín